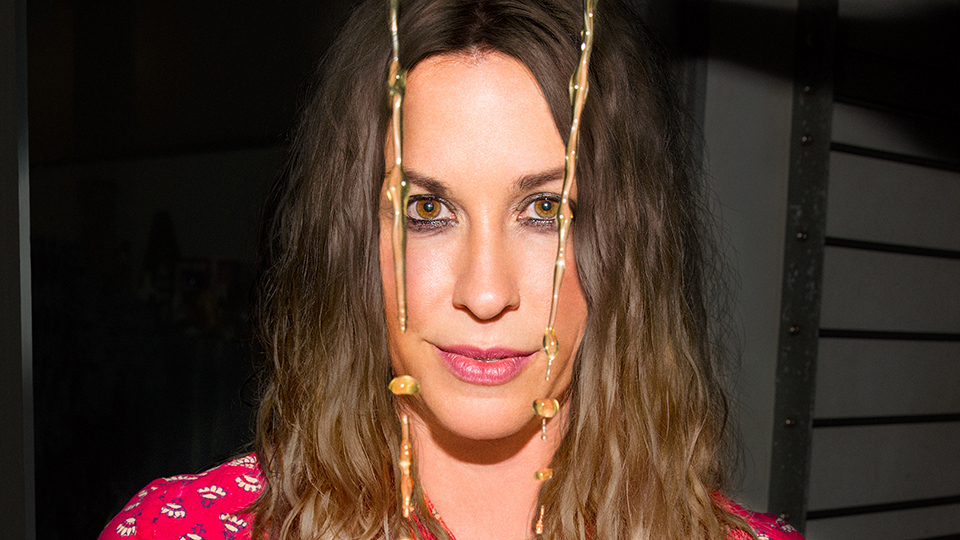 2020 is something of a banner year for Canadian singer-songwriter Alanis Morissette. Not only does it mark the release of Such Pretty Little Forks in the Road, her first studio album since 2012’s Havoc and Bright Lights, it’s also the 25th anniversary of her iconic 1995 album Jagged Little Pill. Following some success as a child star in Canada, Alanis made her transition to serious adult artist with Jagged Little Pill. It catapulted her to worldwide fame and sold more than 33 million copies worldwide. For its 10th anniversary in 2005, Alanis released an acoustic version of the album and anyone who’s seen her tour over the years, knows the set list always lean heavily on songs from the original record.

Ahead of the release of Such Pretty Forks in the Road on 1st May, Alanis is taking time to celebrate Jagged Little Pill with a handful of European acoustic shows. Last night she arrived in London at the intimate O2 Shepherd’s Bush Empire, a venue you’d normally not expect her to be playing in. Billed as a 25th Anniversary acoustic performance, Alanis certainly didn’t let the fans down as her 18-track set list featured every single track from Jagged Little Pill. Backed by two guitarists, and with her trusty harmonica never far away, Alanis opened the set with Your House. The track is the hidden bonus track on Jagged Little Pill and over the years it’s become a firm fan favourite.

The first thing you always notice about Alanis when she’s performing live, is how incredibly strong and rich her voice sounds. Many artists suffer a little weathering over the years but Alanis sounds as good now as she did on the original recordings. Your House sounded powerful and when she hit the first of the night’s many big notes, the audience whooped and hollered in appreciation. Pretty much every song was a sing-a-long with second track Right Through You setting the audience off. It’s long been a favourite of mine and I got shivers as she sang it.

If you’ve heard the acoustic version of Jagged Little Pill, then the arrangements Alanis has been doing on this run of shows will sound familiar. In place she softens the notes, building the song organically to fit with the acoustic backing. One surprise addition, which hasn’t been in the set list on other dates, is Hands Clean from 2002’s Under Rug Swept. Alanis transformed into a softer ballad, stripping away the poppier production that ensured it was a chart hit. She also joked that a fan had once told her she loved that Hands Clean was about Alanis’ love for her lesbian teacher, which isn’t actually the sentiment of the lyrics.

A couple of new songs found their way into the set list. The biting Reasons I Drink, Alanis’ current single, fit nicely into the set list and the gorgeous Smiling, which allowed Alanis to showcase her upper range was well-received. The biggest reactions through were reserved for the tracks from Jagged Little Pill. A beautiful rendition of Mary Jane was a highlight as was the religious exploration of the hard-hitting Forgiven. Head Over Feet, You Learn and Ironic were perhaps the loudest sing-a-long moments of the night, until You Oughta Know arrived, and then the audience nearly lost their minds.

After Wake Up, a song that a fan had been shouting out for from the moment the show started, Alanis told the audience she wasn’t going to force us all through the pretending to finish the show before coming back on stage for an encore part. Instead she launched into Uninvited and brought the night to a close with Thank U, the lead single from 1998’s Supposed Former Infatuation Junkie. After that, she did leave the stage and as the audience left there was a buzz of satisfaction in the air.

It’s easy to forget just how big an impact Jagged Little Pill, and Alanis, has had in music. It’s one of music’s defining albums and it certainly dominated the 90s. Hearing these songs with acoustic arrangements in the intimate surroundings of the O2 Shepherd’s Bush Empire was something really special. Alanis sounded absolutely incredible, never missing a beat and letting her humour shine through between songs. She’ll be back later in the year for an arena tour but I sincerely hope she treats us to more acoustic shows in the near future