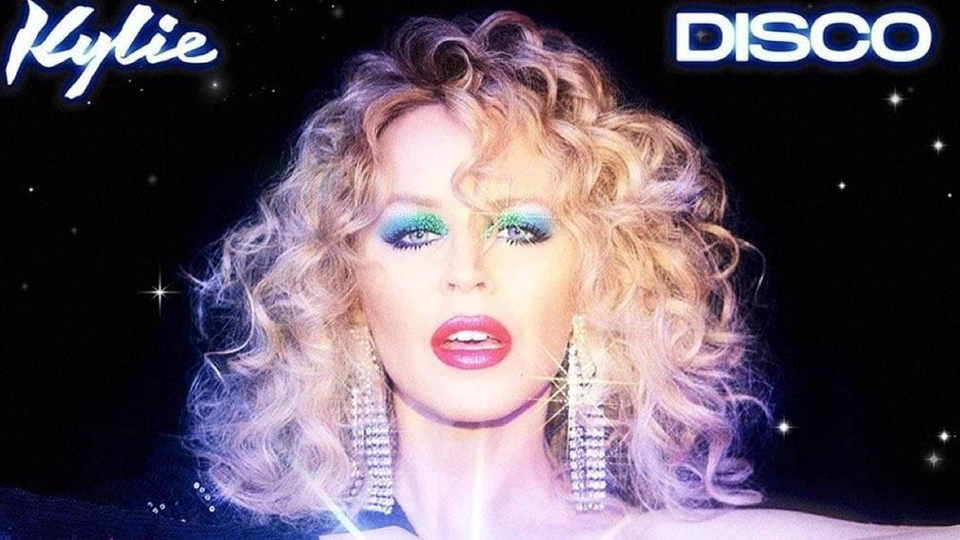 After celebrating her 30+ year career last year with a new Greatest Hits collection and a record-breaking Glastonbury Legends slot, Kylie Minogue has wasted little time moving on to the next phase, more specifically her 15th studio album.

There have been many rumours circulating online in recent weeks with a crescendo in the last week suggesting that the first single from the album would be out on 23rd July.  Today saw a supposed album packshot with the title Disco being shared from Amazon Italy and twitter exploded.  Kylie is seen in a sequined dress with a big Disco perm and a space background, whilst her hands seem to be intricately linking and a ball of light is emerging from them.

As we impatiently waited for official confirmation, Ms Minogue has now confirmed that her 15th studio album is simply called Disco (not Kylie as GQ reported earlier in the year) and will be released on 6th November.  See the cover and hear a teaser below:

Are you waiting for me to SAY SOMETHING??? My new album DISCO is released November 6th and will be available to pre-order from Thursday morning at 00:01 BST ✨ #KylieDisco

The single is expected to be Say Something and although unconfirmed by Kylie, she did hint at that in her post above.  We shall have to wait just a couple more days to find out if it will premiere on 23rd July.  Coincidentally, Zoe Ball has hinted at a special mystery guest that day on her Radio 2 breakfast show which could then tie in with a possible single premiere.

What else do we know about the album?  Let’s look back at how we got to today shall we?

In 2018, it was announced that Kylie was going Country much to the shock of her fans, the industry and the media.  However, before that route was decided, Kylie had been working hard on new music with dance producer Sigala letting it slip that he’d worked with her on a track.

Kylie herself made it clear in interviews for Golden that she’d been working on a dance-pop sound but on the suggestion of her A&R man she went to Nashville and tried adding some Country leanings which then gave the direction for the album and many tracks were either reworked (for example Biffco revealed last year what One Last Kiss sounded like before they Countrified it) or left off the album.

The success of Golden, seemed to really reinvigorate Kylie and her love for what she does really shone through.  As she took Golden on tour, she gave the first hint of what direction her next album would take in an interview with Daily Star.  Kylie said “I feel a bit of disco coming on next.”  She went on to highlight the Studio 54 section of the tour and disclaimed “that’s where I would go at this point.”

I would suggest that had Kylie not been asked to play Glastonbury last year, we’d already have had her new album, however that opportunity brought with it a chance to celebrate her career and so Step Back In Time – The Definitive Collection was released and Kylie did a summer outdoor tour and festival dates.

Now we are in 2020 and Kylie has been working hard in a home studio, learning Logic to help put the finishing touches to tracks for the album.  I’m definitely down with it being disco inspired too.

So who are the potential players on the forthcoming album?  Let’s jump in.

Kylie fans will know him mostly for his work on 2018’s Golden, and as you can see from the caption he states ‘Album number 2 here we come!!’ – for Sky this would be the second Kylie album that he’s worked on.  He also says ‘3 Days of straight fire songs!!’ so he’s clearly thinking they’ve found the magic again.

Those of you unfamiliar with Sky, he’s a writer/producer/musician who worked on Dancing, Stop Me From Falling, A Lifetime To Repair, Live a Little and Love from the Golden album.  What is perhaps most relevant to this new project however is his work on bonus track Every Little Part Of Me which is a good old fashioned pop dance banger with heart.  Could this be indicative of where the new songs are heading?

As you’ll have noted in Sky Adams’ post, he tagged (and we can see) Maegan Cottone – a songwriter and producer – who has worked on tracks such as Move, Salute and Only You for Little Mix, Up for Olly Murs & Demi Lovato and Pretty Girls for Britney Spears and Iggy Izalea amongst others. Of those tracks something quirky like Move could definitely be interesting for Kylie.

Telling the world that he’s been in the studio with Kylie and fellow dance music producer Alex Gaudino.  Note his use of #disco!

Last year as part of the promotion for Step Back In Time – The Definitive Collection, Mousse T remixed the title track exploring f-f-u-f-u-n-k and disco.  Perhaps this is a hint at the direction his involvement might play:

Alex is an Italian DJ and producer who is probably best known for his 2007 hit Destination Calabria featuring vocals from Crystal Waters and his 2011 Top 10 track with Kelly Rowland What A Feeling.  The latter does have that euphoric, uplifting feel that Kylie is known for too.  Have a listen:

Some other names that have been floating around, but that are unconfirmed are Nile Rodgers and also Mark Ronson.  I’d be more than happy with either or both of those names being involved.  Nile has such a disco credibility and Mark’s Late Night Feelings would’ve made for a great Kylie song.  Imagine:

Producer Mirwais has also been rumoured to be involved in the album.  He’s an artist in his own right as well as a writer/producer and some people think that it might actually be his album that Kylie is going to feature on rather than hers.  He is perhaps best known for his work with Madonna including her American Life album and select cuts on Music, Confessions and Madame X.  He has fun with vocal effects and the songs can sound a bit futuristic so if he is involved, I’m thinking more Fever than LY in sound for that track/s.  Interestingly he wrote Future Lovers with Madonna and she mashed that up with Donna Summer’s I Feel Love on tour (Kylie also mashed up I Feel Love into her song Light Years for her Fever Tour a few years prior).  This could be on the right vibe for Disco:

One final point to make, three of Kylie’s best albums have all been released on years ending in zeros; Rhythm of Love in 1990, Light Years in 2000 and Aphrodite in 2010.  Just saying…

Need more Kylie?  Why not look at Entertainment Focus’ A to Z of Kylie Singles or revisit her debut album Kylie.

Disco is available to pre-order from 23rd July at www.kylie.com