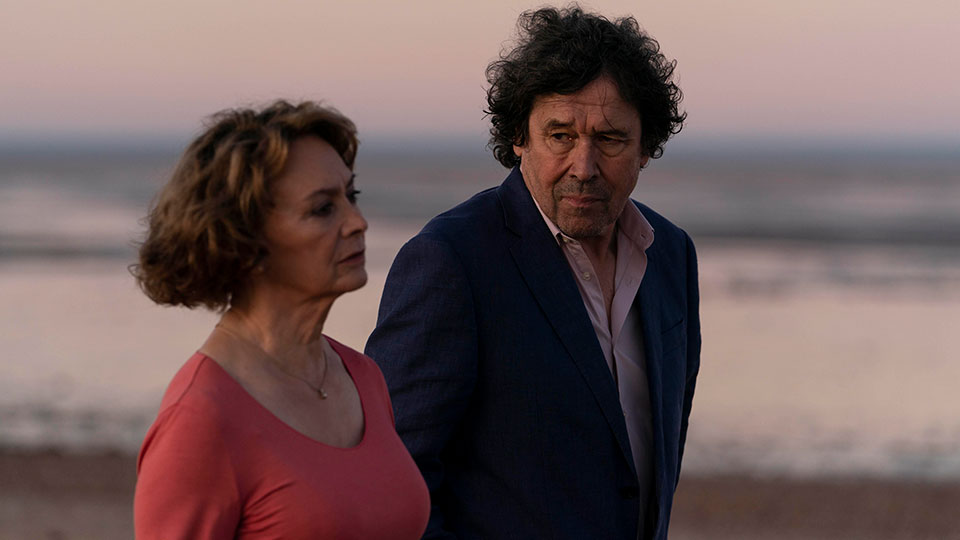 The episode opened with the police investigating a crime scene with Mary (Imelda Staunton) telling the story of her neighbour Vivien (Francesca Annis) and her family. As Mary spoke we saw Vivien running along the beach and it was established that the two women were friends.

Helen (Claudie Blakley) was introduced as the oldest child and we saw her dressed in business attire on a train, hinting that she might have a problem with alcohol. She called her husband George (Keir Charles) to give him a list of jobs to do and he lit up a joint after speaking to her on the phone.

Jake (Russell Tovey), a fitness instructor, was revealed to be four years younger than Helen and a family man while Natalie (Lydia Leonard) was the youngest, and having an affair with her boss Tony (Vincent Regan).

With the whole family now introduced, Flesh and Blood really kicked things off as the story of what led up to that police incident started to play out. Vivien hosted a lunch with the family at her home where Jake teased Helen about her high-powered job. Vivien tried to get everyone’s attention and she dropped the bombshell that she was seeing a new man called Mark (Stephen Rea).

The family reacted with surprise and quizzed Vivien about him. She told them that Mark was a surgeon and the family responded in different ways to their mother moving on following the death of their father a year earlier. As Vivien dropped another bombshell, that she didn’t care what her late husband thought as he was no angel, Mark turned up and Vivien’s children were less than pleased.

The story then jumped to the present day as Mary was questioned by the police about Mark’s introduction to Vivien’s children. Jumping back in time Jake, Helen and Natalie discussed their father and argued about Vivien’s new relationship with Mark.

Vivien apologised to Mark about the behaviour of her kids. As she talked to him from the bathroom, he searched around the bedroom looking for something.

Back to the present Mary told the police that Vivien’s marriage was troubled and that Jake’s marriage to Leila (Lara Rossi) was experiencing trouble too. A flashback showed that Jake was thrown out by Leila who was being very cold to him and ignoring his pleas to talk things through.

From the look of the flashbacks, Mary kept a close eye on Vivien and the family, which explains why she was able to tell the police so much. Vivien told her that she and Mark were going on a surprise trip for a few days. Mark beeped the horn interrupting the women and Mary promised to keep an eye on the house.

We then saw Vivien’s children doing their jobs. Jake was out training with client Stella (Sharon Small) who he was sleeping with while Helen was apologising on behalf of the organisation and had a confrontation with Meera (Clara Indrani) a worker she’d forced to quit her job.

Mark surprised Vivien with a private plane and Vivien told him she didn’t have her passport. He pulled it out of his pocket and said he’d found it in her room while she was getting ready. Was that what we saw him doing earlier?

Helen and Natalie talked about their mother’s relationship with Mark. The two sisters weren’t very honest with each other about their own relationships. Jake spoke to George and expressed his disapproval of Vivien’s surprise. George assured Jake that he would get Leila back but Jake didn’t look so certain.

On their private getaway, Vivien opened up to Mark about her marriage. When Mark suggested he wanted to marry Vivien in the future, she shut him down quickly saying that nothing could be further from her mind.

It was revealed that Natalie had told George about her affair with Tony. He tried to convince her to end the affair but she was having none of it. The gamily then took a photo to send to Vivien, showing them all together.

Speaking to the police Mary told them that Vivien missed family lunches once she got together with Mark and that started to cause the family to fall apart.

Returning home from her trip to France, Vivien cut Mary short when she asked how the break had gone. As Vivien left to get her hair done, Mary intercepted a delivery man and signed for a parcel that arrived. As Mary told the police that she kept herself to herself and wasn’t a nosy person, we saw her steaming open Vivien’s parcel to find a shawl inside.

Natalie was taken to a big house by Tony who told her that he was going to leave his wife so they could live in it together. He told her if she liked the house, he’d put in an offer for it.

Helen and her daughter Lily (Grace Hogg-Robinson) argued about Helen’s relationship with her father. Her daughter suggested that they argued all the time and didn’t respect one another and Helen disagreed with her.

Jake and Leila had a heart-to-heart on the beach where he told her he was going to pay off the debt he’d run up. She said she wasn’t interested in talking further until he repaid every penny and when Jake kissed her, she made a swift exit.

Mark apologised to Vivien for bringing up marriage, admitting it was silly of him to rush so far ahead. Vivien explained that she liked the independence she now had and reassured him that she loved him. Mark asked again if marriage was out of the question forever and Vivien said that it wasn’t.

Natalie had an awkward encounter with Tony’s wife who asked her to come around for dinner. As Natalie got into a car, the wife told her that she knew about the affair and promised her that she wouldn’t win.

Jake continued his affair with Stella and she offered him a flat she owned free of charge in return for his training sessions and more intimate time with him. He turned her down, took his latest payment and left.

Mary was seen wearing Vivien’s shawl while eating and watching TV. She dropped food down it and tried to clean it off.

Natalie quizzed Vivien over the comments made about her father. Vivien revealed that her late husband had an affair for years and that she gave him an ultimatum to break things off so she wouldn’t tell the children. Natalie asked what happened to the other woman and Vivien said she didn’t know. Before leaving, Natalie gave her support to Vivien’s relationship with Mark.

Helen tried to initiate sex with George but he rebuffed her. She reacted angrily while George read a book. That turned into an argument where George told her he felt like she was the boss and he was an employee. As Helen turned off the lights, her phone called and it was Vivien. When Helen answered the phone, Mark was on the other end and informed her that Vivien was in hospital following a collapse.

The next day Mark was looking at information about getting married in Gibraltar and Vivien was home in bed resting. Mark gave her a drink and a pill to take, which she queried but seemed to accept.

Mary repackaged Vivien’s shawl but took out the note from Mark. Meanwhile Vivien’s kids rallied around her at the house to find out more information about her collapse. Helen suggested setting up a rota system to make sure that Vivien was watched at all times. Vivien turned them down and said that Mark would be in the house to watch over her.

Helen and Jake reacted angrily saying that they didn’t know Mark and weren’t happy. Mark and Vivien assured them that he was the best person to look after her given that he had medical experience. Helen backed down but Jake wasn’t happy.

Talking to the police, Mary told how the kids rallied around their mother following her response. We then saw the three of them drinking together and discussing their mother’s financial situation. Jake suggested that Mark was after Vivien for her mother and Natalie pointed out that Mark couldn’t access the money. Helen told her siblings that one of them should get power of attorney over Vivien.

That led to a row about how much money they’d each got from their parents. It came out then that Jake had a gambling problem and when Helen used that against him, he was nasty to her. After Jake stormed off and Natalie left the table, Helen saw Meera standing at the window.

Natalie tried to contact Tony, Jake returned home to his small flat and Helen vomited following her drinking session while being unknowingly filmed by her daughter. Jake called Stella and told her that he wanted to take up her offer of the flat. Natalie got through to Tony saying she needed to talk to him and revealed that she’s pregnant. He hung up on her telling her it wasn’t a good time.

Mark and Vivien danced on the balcony of her home under the stars. She thanked him for being there for her and she broached the subject of marriage. Mary got out her binoculars and watched them, and was seen by Mark.

In the present day, the police told Mary that a person was fighting for their life in hospital and told her she may need to give a formal statement. They pointed out that if the person died, the investigation would turn into a murder investigation.

Flesh and Blood continues Tuesday night at 9pm on ITV.

Advertisement. Scroll to continue reading.
In this article:Flesh and Blood, ITV