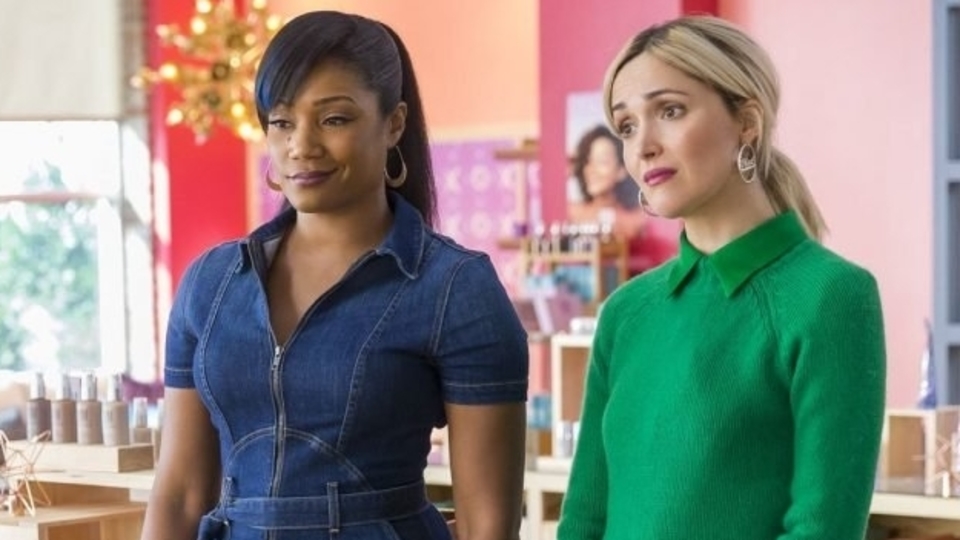 Like A Boss looks like it was a heck of a lot of fun to shoot. Assembling a cast such as this to have fun onscreen clearly must have created a great atmosphere off-camera. Sadly this doesn’t translate to the film itself, which loses pace and momentum very quickly to deliver a comedy that doesn’t try hard enough to utilize its cast or work around the shortcomings of its poor and uninspired script.

The set-up is simple, but handled differently that doesn’t need to necessarily be a negative thing. Mel (Rose Byrne) and Mia (Tiffany Haddish) are lifelong friends who have started up their own make-up company, and are slowly making small ripples in a competitive market. Both bring something to the table to make their business run but they don’t communicate as well as they should, meaning that they find themselves in some financial dire straits.

Enter Claire Luna (Salma Hayek), the head of a major cosmetics empire who is looking to acquire Mia and Mel’s business. After an offer is made and reluctantly accepted, Claire starts to quietly pit the women against each other in a bid to take over the controlling share of the company. Can Mel and Mia put their differences aside and take back their company before it’s too late?

The opening is solid and sets the scene up in a short space of time, with both Byrne and Haddish doing well. I’m a massive Rose Byrne fan and think she’s one of the most versatile actresses of her generation. Haddish has made huge strides since first bursting onto the scene, and both share a believable and astute chemistry that keeps things ticking over. Both actresses work hard to transcend the mediocrity of the script.

Salma Hayek is wasted here, with a role that doesn’t use her effectively at all with a one-dimensional character that has no scope. Bizarrely, they have also given her a set of false teeth that only serve as a distraction. Hayek can do comedy easily so she sells it nonetheless, but she could have done so much more given the chance. The three share a good chemistry when they are onscreen, but it’s the plot that doesn’t allow them to shine. After a promising start, the film turns to a collection of predictable set-pieces rather than tell a story, and the finale is very predictable.

The supporting cast are also all too good for this film with Jennifer Coolidge, Ari Graynor, Jessica St. Clair and Lisa Kudrow all having wafer-thin roles that don’t utilise their comedic gifts at all. Billy Porter does well as Barrett, one of Mia and Mel’s workers and frequently steals the show. Ryan Hansen, Karan Soni and Silicon Valley’s Jimmy O. Yang are also wasted here. When you look back at this assembled cast, it’s criminal that a decent comedy hasn’t been made.

I desperately wanted to like this but with so much talent and potential in front of the lens it’s a crying shame that Like A Boss fails to ignite properly. Without a strong enough script the slim idea gets found out far too quickly and the end result is a very short run-time feeling quite long. With this cast, that’s an unforgivable mistake to make and they all deserved far more from the project. The slender 83min runtime doesn’t fly by, and that’s a telling mistake. I’m not sure what’s happening in Hollywood right now but there have been a hell of a lot of mediocre comedies churned out with A-List talent involved. It all needs to step it up a gear so that we can have a new set of comedies that will stand the test of time rather than be instantly forgotten.