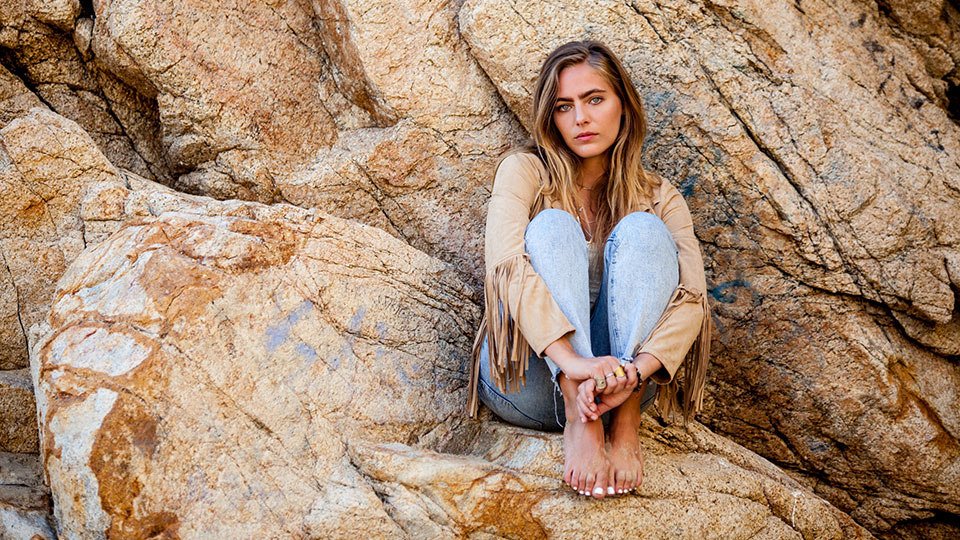 Lauren Jenkins was back in the UK recently to tour with Brett Eldredge on his European tour.

Since coming over for the first time in March 2019 for C2C: Country to Country, Lauren has been getting back here as often as she can. Her debut album No Saint is approaching its first anniversary and Lauren is working on new music to be released this year.

I caught up with Lauren in London to find out how the tour with Brett was going, discuss the growing fanbase for her in the UK and to talk about her plans for the rest of the year.

How does it feel to be back in the UK?

You’ve been here a few times now since C2C last year. Are you seeing things growing for you?

Yeah. The first time was mind blowing and I thought maybe that was just a mistake and maybe the stars aligned. Coming back in September, and being able to headline some shows and seeing familiar faces, I realised this is actually real, there’s actually a place for me to play here, people are showing up and people are buying the merch. This tour is the biggest for sure. Every single show, I’ll stand on stage every night and I’ll look out into the audience and I’ll see at least a few people that I remember from September or from March, who have come back and they come to multiple shows. It’s been really amazing to see familiar faces and be able to catch up with them and then also to meet so many new people, especially on this tour and the rooms are so big.

What’s being on the road with Brett been like?

Brett is super talented. His entire crew has been really kind to me and my little sister who I brought with me to help carry all this stuff and sell merch. They’ve not treated me like an opening artist, they’ve treated me as an equal and have been really helpful. Brett’s been super kind. We’ve just had a lot of fun, you know, giving the other band guys shit and joking a lot and a lot of laughing so it’s been really, really fun. Although it’s a lot of trains, a lot of walking and a lot of trains.

Have the trains been on time? That’s the big question because in this country they’re not often…

For the most part yeah. There was only one close call but that was my fault. I got on the wrong train. I got on the local train instead of the express train and it didn’t actually go to wherever we were supposed to go. That was a brief panic moment of, ‘OK, are we going to get to the show on time?’ but we did. That was the only time that it’s really been a massive issue.

I presume that wasn’t this country…

No, I think that was Germany.

Germany are very efficient so I’d probably say it’s Germany. If it were the UK, you’d have just been stranded…

Well, we were! We had to jump onto another train because the train just ended. It was Germany going back to Cologne. We didn’t have a ticket for that train and I was worried that I was going to get kicked off or arrested or something. I didn’t know how the process works (laughs) but luckily everything turned out okay.

Did you have to use any German? Do you speak German?

I do not speak German, but I am learning German phrases and I would like to know even more German the next time that I come. I now know a little bit of Swiss German, but I feel like I’ve already forgotten Swiss German. Zurich was the first place (we went to) and I found out that Swiss German is very different than regular German.

No Saint has been out for almost a year. How are you feeling about the record now?

It’s crazy because actually today, one year ago exactly, I had my national TV debut on the Today show. Somebody sent me a photo of her crying and she was like, ‘that was a year ago today’, and I was like, ‘that seems like a lifetime ago’. So much happened in the past year that I really couldn’t anticipate any of it. The record coming out and playing the Opry and getting to tour over here and playing the Today show… it’s all been really incredible and really amazing in such a short amount of time. I’m so grateful for all of those things and simultaneously I’m looking ahead and super excited for the music that I’m making right now and the songs that I’ve been writing and recording. It’s interesting to look back and see all the things that have happened in the past year. I have no idea what’s going to happen in the next year but I’m really excited.

Your music doesn’t sound like anything else that’s out there and you’ve been operating completely in your own lane. You put out the two Springsteen covers recently. Is that to bridge the gap between the debut album and what’s coming next?

Honestly, part of it was that I wanted to have new music out before I came back over here. The audience over here has been so kind to me and so supportive that I wanted to give them something new. I remember back in March, I think I was in Amsterdam maybe, but I decided to play a Springsteen cover and everybody sang along. It was a really, really intensely exciting moment. I was just kind of shocked and I realised, ‘okay, a lot of this audience likes Springsteen too’. He’s one of my favourite storytellers so I’ve always wanted to cover those two songs, but part of why I put them out right before coming on this tour is because I wanted everybody to have something new. I wanted to create those versions because they’ve only existed in my head. I’m just constantly making music, I’m constantly writing and in the studio so to me It made a lot of sense to go ahead and do it. I just got to finish the music videos for those.

How did you even find time to be creative when you’ve been so busy the past year? I think I’m busy but I can’t function after five o’clock…

You see this coffee? You just have to have a lot of coffee and everybody’s different. I personally work really well at night time. I’m a night owl and also when I’m inspired I don’t get as tired and I’m fine with working through the night, and actually sleep is really difficult. We’ll see how it goes when I go back to Nashville because I’m pretty energised from this entire tour. so we’ll see if I can get any sleep when I get back. I kind of doubt it.

I’m much more of a morning person. I fire on all cylinders but get to five o’clock and I’m done…

We are total opposites (laughs)

We would be very compatible in a job share scenario…

I don’t know, you would have to be cool with like recording vocals at 3am….

I could try but I doubt it would sound very good…

I have writes set up the day after tomorrow. I’ll be back into writing and back into the studio. I have some shows that haven’t been announced yet and some festivals that haven’t been announced yet. I’m really happy and comfortable when I’m on the road. Hopefully, I’ll be on the road a lot. I’ve got the two music videos that I’ve got to finish editing for the Springsteen songs so those will be coming out and then new music. Hopefully a lot of new music.

And maybe coming back here?

Not a house. I mean, just maybe like a plane ticket or something. Or, hey, if there’s couches available… My sister and I like crashed on a friend’s floor and then another friend actually let me borrow his apartment, which was so nice and it saved us a lot of money. If people have extra rooms or a bathtub I can sleep in, then it’ll be easier. It’ll be cheaper.

I’m sure if you asked, you would get inundated with offers but you might have to sift through those offers…

(laughs) Yeah, preferably not a bathtub but if that’s what I have to do to come back over then I’ll do it.

Lauren Jenkin’s debut album No Saint is out now. Her covers of Bruce Springsteen’s Stolen Car and Hungry Heart are available to download and stream. Take a listen to Stolen Car below: