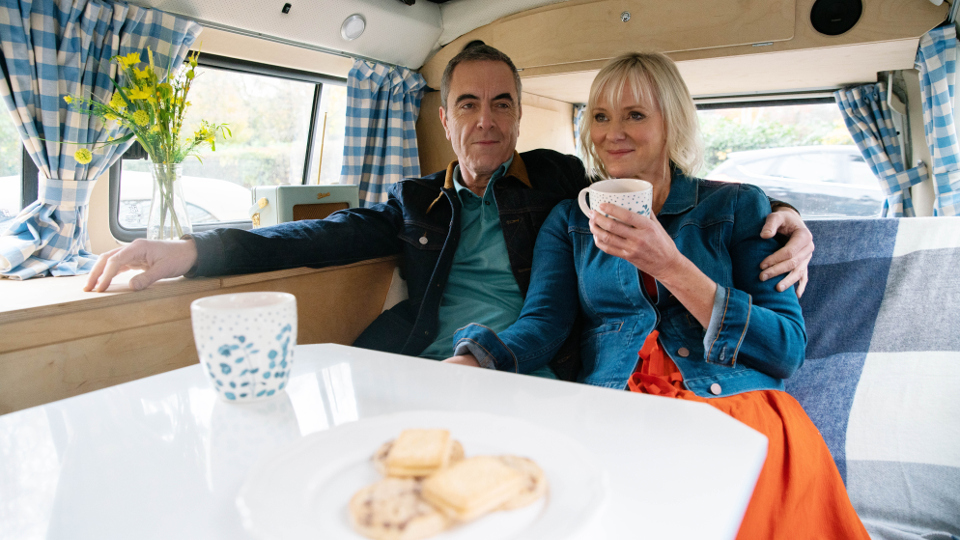 On the season 9 finale of Cold Feet, Adam (James Nesbitt) and Karen’s (Hermione Norris) future was thrown into jeopardy by an unexpected offer.

The episode opened up with Karen editing a book while Adam worked on the old VW camper van he bought. It needed some serious work but he dreamed of how it might be once he’d restored it. Meanwhile, Jenny (Fay Ripley) received news of her first mammogram since her cancer treatment ended. Typical Jenny put on a brave face to hide how worried she was.

The gang got together at Karen’s and the boys checked out the camper van while the girls went off together. Karen admitted how stressful she was finding her business while Jenny revealed how terrified she was of her mammogram. Adam and Pete (John Thomson) teased David about Robyn (Lucy Robinson) and he admitted he didn’t know what to think himself. Suddenly Robyn called and when he answered she asked if he’d found an earring at his flat as she’d lost one.

Later, Karen caught Adam watching a video on the Internet to learn how to fix up the camper himself. She suggested he just take it to a garage but he said there was no satisfaction in that. Olivia (Daisy Edgar-Jones) came home and asked Karen to lay an extra place as she’d brought Toby (Jamel Dwyer) with her. Matt walked in after them as his Dad was shaking hands with Toby.

That evening, Adam took Matt out for a meal. Matt was annoyed at his father making a joke of everything and said he wanted to move out. When they arrived back home, Toby was just leaving. Matt went to bed and Adam chatted with Karen about the situation with Matt and Olivia. Adam thought Olivia was being unfair but Karen reminded him that Matt had previously cheated on her. Adam wondered if he and Matt should move out until Olivia went to Uni and Karen agreed if that was what he wanted.

At home, Pete was watching TV and was a little annoyed when Jenny came in and turned it off. A little jealous of Adam and Karen’s camper van she announced she wanted to make a bucket list. Chloe (Madeleine Edmondson) later found it and worried that her mum’s cancer had returned. Jenny said it was just a way to look ahead to all the things she wanted to do with her life.

After Adam and Matt moved out, Karen found herself even more stressed. She was having no luck with her publishing business and decided to give her ex-business partner Benjamin a call. He previously offered to buy her out and she said she was now interested in his offer. They spoke and she agreed a price and sold her company.

David popped in to see Karen for a chat and she guessed he wanted to talk about Robyn. She revealed that she and Robyn had earlier been out for coffee and that Robyn had been asking about David. Robyn had told Karen that her and David spent the night together. She wanted to know if Karen could find out what David was thinking.

After Karen’s news, Adam took the camper to a garage and spent a fortune on getting it fixed up. He suggested a weekend away and Karen agreed.

At the hospital, Jenny waited on her own for her mammogram appointment. She picked up a magazine and remembered taking some after her chemo appointment to give to her mother. It made her smile and then before she knew it she was called in.

Karen was invited to a lunch where she was introduced to a publisher named Maxine Ibson (Frances Barber). She admired Karen and all that she had achieved. The lunch meeting was actually a job interview and Karen was presented with a contract.

When Karen got home she found that Adam had been busy planning their trip. He had a map set up in the kitchen complete with a route of where he planned to take her. She was impressed and didn’t want to upset him so didn’t tell him about the job offer. Karen spoke to all her friends and family for advice but they all had different ideas. Karen wanted to go travelling and take the job but couldn’t do both.

Adam went out for a drink with Pete. He couldn’t believe that Karen wasn’t as excited as he was about the trip and wondered if she’d changed her mind about their relationship. Pete let slip about the job offer and Adam rushed home to talk to Karen. He was upset that she hadn’t told him and even more upset when she explained it was based in London. He began to take the pins out of the map and was shocked when she revealed that she turned the job down because she wanted to be with him.

David popped round to see Robyn and arrived on her doorstep with her missing earring. She invited him in and they shared a meal and a bottle of wine. He complimented her on her cooking and Robyn confessed that she left the earring so he’d get in touch. They spoke of how much they’d both changed since the divorce and opened another bottle.

Back home, Adam spoke with Matt about his upcoming 18th birthday party and asked if it could be a joint leaving do. Adam also asked Matt’s permission to ask Karen to marry him. Matt gave his father his blessing.

Jenny came home and checked the mail to find a letter from the hospital waiting for her. It was her mammogram results. Pete came home to find her in the kitchen, in tears and holding the results. Presuming the worst he said she’d beaten it once and could do it again. That’s when Jenny announced that she was ok. Pete gave her a hug and declared the bucket list over. He said he was at his happiest sat on the sofa watching TV together and said that she was his bucket list.

For the party, Jenny’s hair had grown back enough for her to not need her wig. After arriving she told everyone her good news. Karen received a call and took it outside, it was Maxine calling about the job. Inside, Adam took David aside to tell him his plan to propose to Karen. David was shocked at first but then gave his blessing. Maxine had a car waiting for Karen and told her it would take her to a suite at the Dorchester and then in the morning she would introduce her to her team. Karen asked for time to think about it and Maxine said she needed her to be fully committed.

Karen spotted Matt outside and asked if he was ok with things. He almost put his foot in it and asked if his Dad had asked her. Karen was confused but Matt quickly corrected himself and changed the subject to how excited Adam was about their travelling. Karen went back inside with Matt as Adam was giving a speech. He was about to pop the question but Karen ran over and asked to talk to him outside. Adam went with her and gave David the microphone.

Adam thought it was about the job but Karen said they needed to be there for Matt. Adam felt it was a trick to get them to stay so she could take the job. She said she’d have given her right arm for the job but this was about their family. Adam asked her what she wanted and she said she wanted it all. He told her to get in the car and that they would find a way to make things work.

With the DJ at the loo, David gave a bit of a speech crossed with a standup comedy act. He spoke of travel and mentioned Istanbul where he went on his second honeymoon with Robyn. He said he’d like to go there again one day and suggested Robyn might like to go with him too. David began to propose a toast but the DJ must have thought it was Adam proposing to Karen. It ended up in everyone thinking David had proposed to Robyn. She told him she’d like to give it another go and proposed to him and they kissed.

Karen made a call to Maxine and gave her terms. She agreed to see her on Monday. As Karen came off the phone, the fireworks Adam had planned went off in celebration of David’s ‘proposal’. Karen was confused and Adam kissed her. Back inside, Karen realised that the proposal was meant for her. Adam asked what she would say and she said that they didn’t need to marry as she was his.

Elsewhere in the episode, young Adam (Jack Harper) was planning a European tour for his band. Pete helped him plan it and stepped in to drive the van for them when they needed someone over 21.

At the end of the episode, Adam and Matt went off travelling together in the camper van. Before they left, Adam wished Karen good luck for her job. Everyone waved as they drove away. Matt tried to find something to listen to on the radio and they settled for ‘The Female of the Species’ by Space which Adam said was his and Rachel’s song when they got together.

ITV have confirmed that Cold Feet is set to take a break but is expected to return in the future to catch up with the gang.