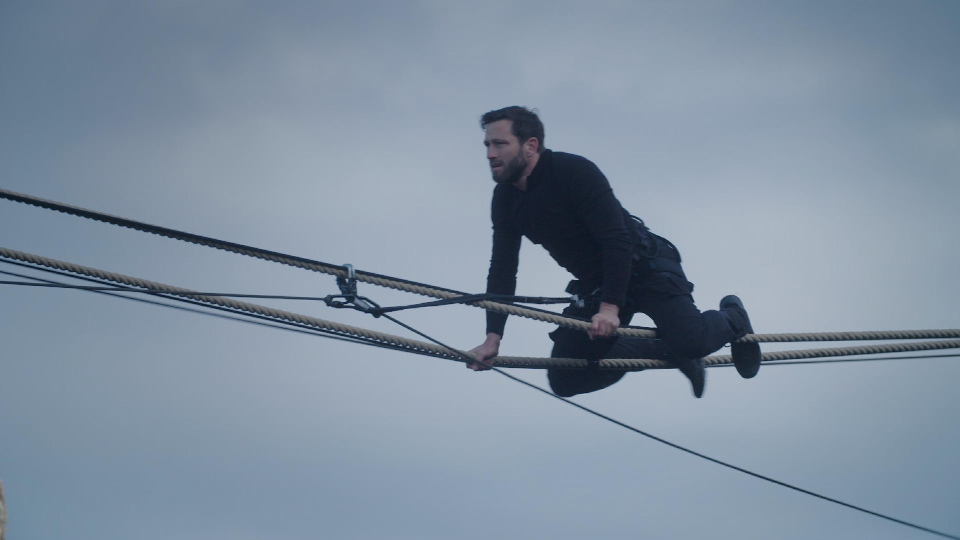 On the latest episode of SAS: Who Dares Wins, the focus for the remaining 13 recruits was Grit.

The latest challenges began with former mole and new Directing Staff member Jay putting the recruits through a beasting just half an hour after going to sleep. Immediately number 16, Oliver decided to Voluntary Withdraw from the course due to being exhausted. The remaining recruits were outside in the driving rain and forced to hold their 40kg barrels above their heads for two minutes. The recruits weren’t allowed to go back in to sleep until they had completed their own two minutes. After half had completed the challenge the rest were allowed to follow.

The next day the recruits were faced with a gorge crossing, using just two ropes, 40 metres above the ocean. Jay went first to demonstrate the technique and what was required. Halfway across they had to hang from one rope before pulling themselves back up and completing their crossing. It proved a very difficult challenge with only a few recruits managing to complete it.

Number 15, Carla, the oldest recruit at the age of 40, struggled to pull herself back onto the rope which made the DS wonder if she was struggling too much. They later pulled her in to speak to her and said she needed to focus on using her mental strength to push further physically.

The next challenge saw the recruits split into two teams while they carried out a casualty extraction exercise. The teams had to race 3km over tough terrain. Number 15, Carla and number 9, Kim were put in charge of the teams. Number 19, Kirsty fainted while carrying several bergans. The teams were switched to male versus female with Kirsty taking the position of casualty for the women. After a big effort from both teams, the men finished slightly ahead.

At the end of the team race, they found themselves on a cliff edge. Another challenge followed immediately where half the recruits had to abseil a fellow recruit down the cliff, 60 metres to sea level. On the trek back, Carla twisted her ankle and struggled to walk. She was pulled in again for interrogation where the DS found out that she took part in the 2008 Beijing Olympics at Rowing.

Back at base, the DS decided to test the recruits with video messages from home. It was a test to see how they would cope and many recruits found themselves in tears. The DS were particularly concerned by the reaction of Number 1, James. He completely broke down and they had to bring him in for questioning to discover more about his past.

At the end of the episode the DS decided to cull a further two more recruits. They chose to remove number 20, Pavandeep and number 19, Kirsty. Ant also said that number 15, Carla was still there by the skin of her teeth.

In episode 5, ten recruits remain in this bid for SAS selection. In this episode they are sent on the run from a military-trained hunter force, stalked across the punishing Scottish Highlands during the Escape and Evasion phase.

Those who make it through will face the most psychologically demanding phase of selection, Interrogation, where they are captured and questioned by a specialist team of military interrogators. With limited sleep and rations, the final stages of selection are designed to grind down recruits. Only the strongest will remain.