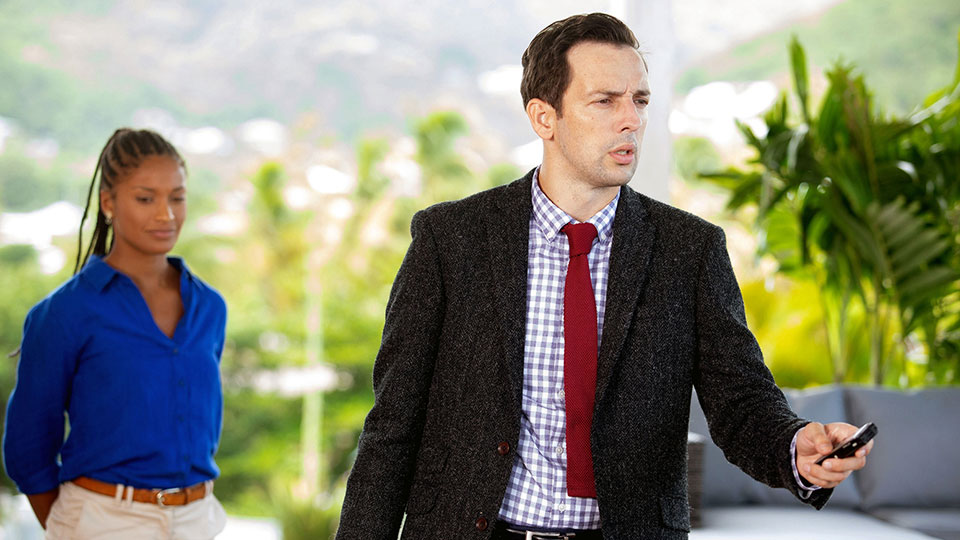 Death in Paradise welcomes the arrival of a new detective next week after D.I. Jack Mooney (Ardal O’Hanlon) departed the island on the latest episode.

If you want to avoid spoilers for Death in Paradise, stop reading now.

In episode 4 Christopher Williams’ (Michael Obiora) lifeless body was found on a boat far out at sea. Jack, D.S. Madeleine Dumas (Aude Legastelois), Officer JP Hooper (Tobi Bakare) and Officer Ruby Patterson (Shyko Amos) were called out to the scene of the crime to investigate.

The evidence pointed towards a deadly fall but Jack wasn’t convinced. He was bothered by the strange appearance of the body and the fact that Christopher’s car was found abandoned miles away.

Suspicion fell on those closest to the victim: Christopher’s wife Alesha (Clare Hope-Ashiety), and friends Clarence (Javone Prince) and Shonelle (Lorraine Burroughs). With everyone having an alibi for the time of the murder, the team drifted further away from finding out the truth.

Meanwhile, Jack’s daughter Siobhan (Grace Stone) visited and encouraged her father to accept Anna’s (Nina Wadia) offer to join her on her travels.

Celebrations at the launch of the new luxury Henderson resort in Saint Marie are cut short when British developer Neil Henderson’s (Steve Pemberton) daughter, Tamsin Lewis (Chanel Creswell), is found electrocuted in her hotel bathtub with the door locked from the inside.

As all evidence points towards suicide and Commissioner Selwyn Patterson (Don Warrington) concludes this to be the case, the team calls for reinforcement from Manchester, as D.I Neville Parker (Ralf Little) flies over to Saint Marie temporarily to confirm and close the case as suspected suicide. However, an empty mouth guard case and packet of sleeping pills results in Neville extending his stay, much to his dismay, as he investigates it as a murder.

However, since all of them having an alibi and Tamsin’s door was locked from the inside at the time of her death, the team struggles to prove foul play.

Meanwhile, Madeleine (Aude Legastelois-Bidé), JP (Tobi Bakare) and Ruby (Shyko Amos) try to make the new detective feel at home during his short stay – but Neville is finding it hard to acclimatise to island life.

Death in Paradise continues at 9pm Thursday on BBC. Preview it with our gallery below:

In this article:BBC One, Death in Paradise