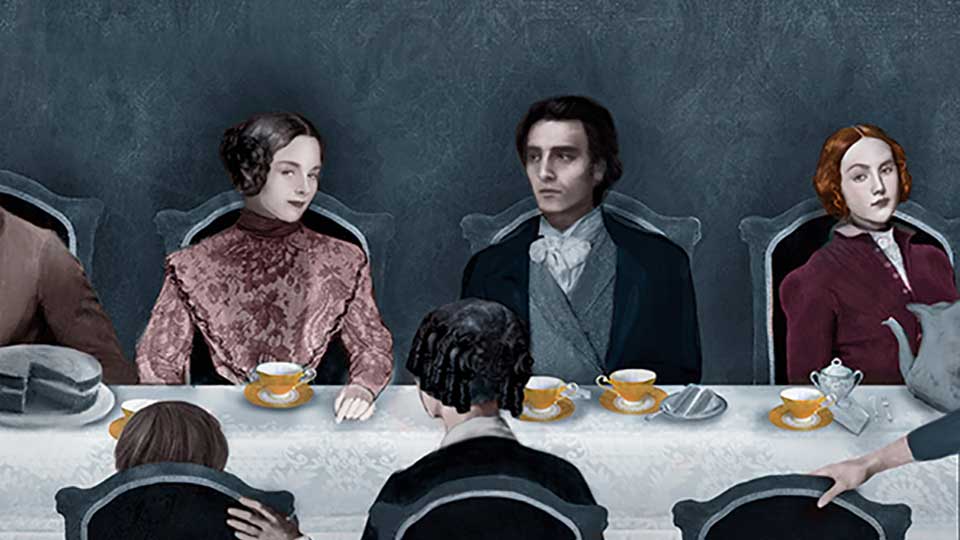 If there is an overlooked Brontë, it’s certainly Anne. But when your siblings Emily and Charlotte have written literary classics such as Wuthering Heights and Jane Eyre, there is a good chance you’ve a rich strain of storytelling in your veins too. But up against such competition, Anne’s place in the pantheon of great English writers is perhaps balanced by a similar conundrum to the one that befell George Harrison – the third best songwriter in The Beatles. Is it beneficial to be attached to a global brand, even though you’re likely to be overshadowed? The alternative, standing on your own merits, risks obscurity that is otherwise avoided.

The best thing to do is to talk about Anne Brontë and her second novel The Tenant of Wildfell Hall in isolation and judge it on its merits. I took an interest in Anne Brontë’s literary canon after seeing her grave in Scarborough last year. I hadn’t been looking for it. I just happened to wander past the graveyard of St Mary’s Church. It’s an unassuming plot, though beautiful, and it has more recently been refurbished with a new headstone. Which of her works had I read? I pondered that question as I stood at her grave. None, it later transpired. Selected works of her sisters had been on my school reading list. Anne’s had not.

Now that The Folio Society has issued a new edition of Anne Brontë’s best-known work – The Tenant of Wildfell Hall – it has proven the perfect opportunity to turn to the Brontë I had neglected and discover her most famous contribution to literature for myself. Colour paintings by Valentina Catto capture the mid-nineteenth century period, and this exquisite edition will light up any bookcase.

The Tenant of Wildfell Hall was first published in 1848. It tells the story of a private young widow, Helen Graham, and her son Arthur. They move to Wildfell Hall, where their attempt to lead a quiet life results in gossip. Gilbert Markham, a local young farmer, befriends and then falls in love with Helen, but tensions increase when the skeletons in her closet threaten to break free. In desperation to prove herself innocent of lurid rumours, Helen hands Markham her diary. He reads an account of her courtship with Arthur Huntington. At first their married life is idyllic, but then Huntington turns increasingly to drink. For long periods, he abandons his family altogether, returning only to force his hedonistic lifestyle on them, bringing in tow his mistress and disruptive friends. Helen worries increasingly about the influence of exposing her son to their waywardness. Once Markham has read the diary, it reverts back to the ‘present’, and he looks for ways to help the unhappily married woman out of her desperate situation.

The prose of The Tenant of Wildfell Hall is a treat to read. Anne Brontë’s style is elegant, though at times visceral. There is a strong sense of place and time. Yet there is something about the epistolary framing device that is unsatisfying. We learn about the unfolding ‘present’ events through a series of letters Gilbert Markham writes to an unseen and unknown friend, up until the insertion of Helen’s diary, after which Markham’s letters resume. It’s hard not to conclude that the story would have more immediacy and urgency if simply told from a third person narration point-of-view. I have a personal preference for stories (regardless of medium) that are told from the point of view of a single protagonist, so my own reluctance to accept a second narrator is showing through. The resolution of the story is a touch cute too – there is a death and an inheritance (the events are unconnected) that conspire to afford a happy ending. It is not entirely unbelievable, but a little reliant on coincidence to bring home the desired conclusion.

Illustration ©2020 Valentina Catto from The Folio Society edition of The Tenant of Wildfell Hall.

The awkward structural issues detract a little from the story. The large hiatus in the middle of the book to learn about Helen’s backstory means that the reader has to get on board with her relationship with Gilbert Markham all over again much later. I said I would judge The Tenant of Wildfell Hall on its merits, but in the end, it’s hard not to conclude that Eyre and Rochester, or Cathy and Heathcliff, are more memorable couples.

After an unfair comparison, it’s worth pointing out what Anne Brontë achieves that her sisters never did. The book is realistic, and a forensic study of a bad and abusive marriage, as well as unstinting on its examination of alcoholism, and the difficulty of living with an alcoholic. It is for these merits that The Tenant of Wildfell Hall lives up to its reputation as a literary classic. Unusually for a nineteenth century novel, there is little excess fat and overly-verbose passages – the book is the right length to tell the story, the two narrators are entirely believable, and the story is a powerful one. Its insights into marriage and the predicament of a woman trapped in a bad union where divorce, dereliction or adultery were outcomes that all brought disgrace, is groundbreaking. Thirty years after The Tenant of Wildfell Hall was written, Ibsen’s A Doll’s House would be performed, which scandalised polite society in its depiction of a young woman ultimately choosing to defy her husband and leave him. Such literary efforts soaked into the surrounding culture and laid the groundworks for the much more radical emancipation of women in the early twentieth century.

As for Anne Brontë, she wouldn’t live to hear of Ibsen’s play, dying from tuberculosis in 1849 before even reaching her thirtieth birthday. The early deaths of the Brontë sisters adds to their allure – imbuing them with the tragic nature of some of their heroines. Even if their works didn’t immediately change society, they endure now for future generations. The Tenant of Wildfell Hall will certainly live on. It is best remembered for what makes it stand out against the romantic novels of the other Brontës: Anne ploughed her own furrow. She deserves credit and immortality through her work for that.

The Folio Society edition of Anne Brontë’s The Tenant of Wildfell Hall, introduced by Tracy Chevalier and illustrated by Valentina Catto, is available exclusively from The Folio Society.

In this article:Anne Brontë, literature, The Folio Society, The Tenant of Wildfell Hall