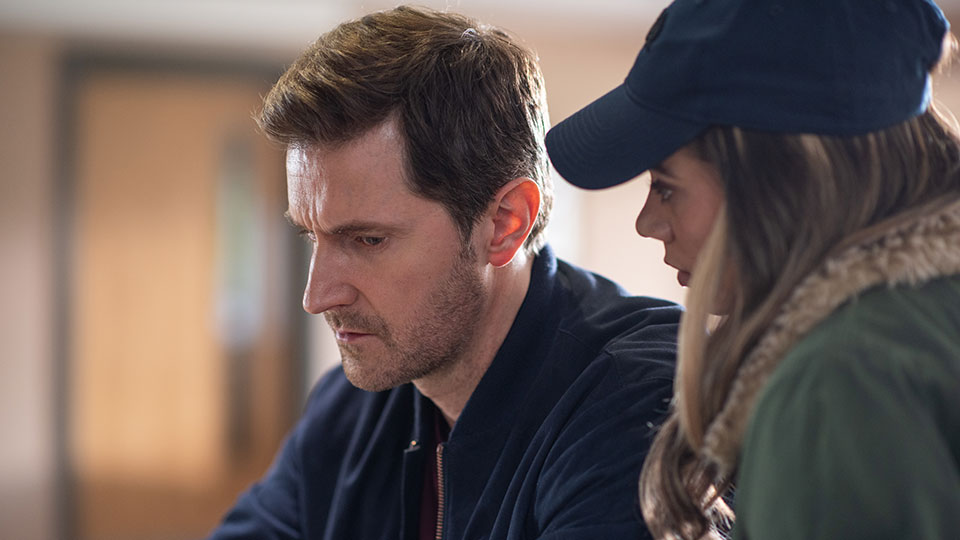 Following our reaction to the first three episodes of Harlan Coben’s Netflix series The Stranger, we’re now delivering our verdict on all eight episodes.

If you want to avoid spoilers for The Stranger, stop reading now.

The Stranger is an eight episode adrenaline-filled ride that throws family man and lawyer Adam Price (Richard Armitage) into a spiral when he finds out, via a stranger (Hannah John-Kamen), that his wife Corinne (Dervla Kirwin) has been hiding some pretty big secrets from him.

As Adam confronted his wife, his son Thomas (Jacob Dudman) and his friends Daisy (Ella -Rae Smith) and Mike (Brandon Fellows) were caught up in another mystery involving a student called Dante (Kai Alexander) who was found naked and unconscious after a night of drink and drugs at a party.

As we explained in our preview after three episodes, a lot happens in a short space of time and The Stranger doesn’t waste any time. It’s quickly established that Adam and his family are only one target of the stranger, who has dirt on everyone in the town including local café owner Heidi (Jennifer Saunders) and Adam’s dad Ed (Anthony Head).

The Stranger, and her accomplice, come in and out of the lives of the show’s central characters as they drop bombshell after bombshell. All is eventually revealed by the final episode but it’s fun to watch it unfold and we won’t ruin the ultimate climax, or the bigger surprises along the way.

Where The Stranger succeeds is in the fast-paced way the plot unfolds and how quickly it draws you into the middle of the lives of the characters. You can’t help but feel for Adam, expertly played by Richard Armitage, as he tries to hold his family together after Corinne disappears once he finds out her secret. You care about Heidi when she contemplates paying off the stranger to protect a dirty secret she has over her daughter that could ruin her future.

Police officer Johanna Griffin (Siobhan Finneran) also becomes a character you care deeply for. From the moment she discovers the death of someone close to her, she’s a woman on a mission to get to the bottom of what’s going on. Finneran layers her character with so much humanity that you can relate to her, and you root for her throughout.

There’s no doubt though that this is Richard Armitage’s show. He’s a favourite with UK audiences but here he’s a little bit Jack Bauer and we like the edge to his character. As the series progresses, he becomes progressively more unhinged in the search for the truth and you find yourself happily sitting in his sidecar and joining him for the journey.

Where the show falls down is with the unnecessary sub-plot involving the kids. In our initial preview we criticised the plot but hoped that it would somehow link into the main story. It doesn’t. Instead the show spends lots of time with Thomas, Daisy and Mike frantically plotting and getting their stories straight over what happened to Dante and why a decapitated alpaca was found in the middle of the town.

The whole plot adds up to absolutely nothing and it’s just a big distraction. The Stranger really didn’t need it and had it been removed, this would have been a 5-star show. Also we don’t know in what world you can cleanly decapitate an alpaca with one swing of a spade. C’mon now!

That quibble aside, The Stranger is undeniably addictive. It was made for Netflix’s auto-play feature and once you get into the groove, good luck turning it off. The writing is very tight, the performances fantastic and the twists come thick and fast. Each episode ends with dramatic music and fast-paced cuts, and it makes you want to keep watching.

Could there be a second series in the future? There’s enough of a plot there to continue it should Harlan Coben and Netflix choose to, and given how quickly we binged the first series, we certianly wouldn’t be opposed to it.

In this article:Harlan Coben, Netflix, The Stranger