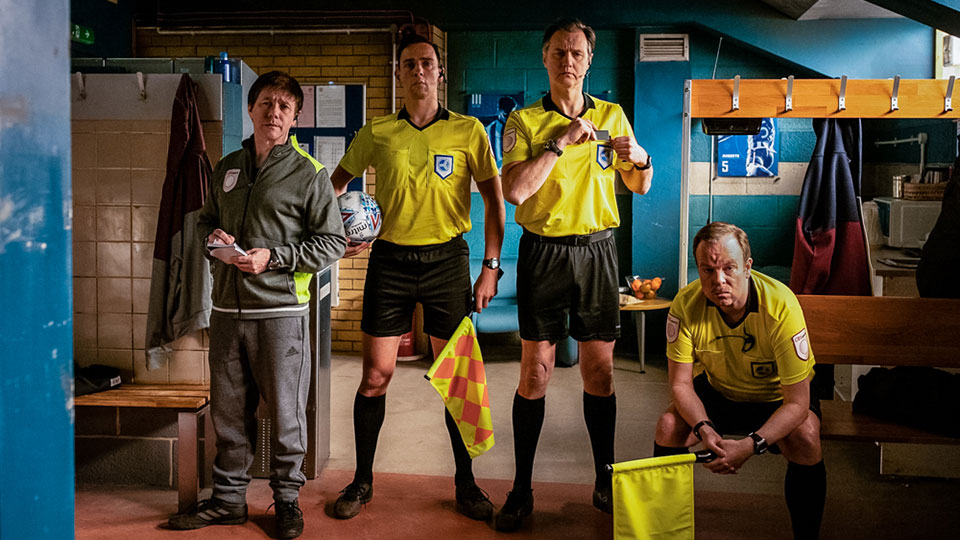 Dark comedy Inside No. 9 is back for a fifth series on BBC Two next week.

The first episode, titled The Referee’s A W***er, stars David Morrissey, Ralf Little, Dipo Ola and Steve Speirs along with creators Reece Shearsmith and Steve Pemberton. The synopsis for the episode is:

The beautiful game. The crunch clash between United and Rovers in the last match of the season, all safely in the care of the four match officials.

Ahead of the show returning Reece and Steve agree that it’s the most varied series of the show they’ve done yet. Steve comments:

“We always aim to have varied episodes. We have some great episodes and some real good surprises. Each time we finish a series, you look back and you kind of go ‘Where did that come from?’ With no memory of creating it…”

Talking about how they researched the football theme for the opening episode of the series, Reece says:

“We didn’t actually speak to any referees but there’s great podcasts and websites you can look at and interviews you can find, so we did do a lot of research for that one. The referees changing room is a space that probably most of us don’t think about very often but it just struck us as a really interesting idea to set an episode there. It’s very useful with Inside No. 9 to have a preordained structure, so the idea of ‘before the game’ ‘halftime’ and then ‘after the game’ gave you a really good structure for an episode and that that felt really exciting and it was a different No. 9 to be inside.”

With the new series being more star-studded than ever, Reece and Steve get lobbied by actors who want to appear on the show. Discussing the demand from actors Steve explains:

“David Morrissey had been saying to us for ages that he would love to be involved in it. Interestingly Referees and The Stakeout are the only two episodes we’ve written which are all male casts, and we’ve never really done that before. It was interesting with Referees because we didn’t know which parts we wanted to play. Genuinely we could have played any of those roles within it. We just thought the main referee character would be a big leading man. I was doing Britannia with David at the time and was telling him about it and I could see a little glint in his eye.”

Looking back at the previous series, Reece and Steve are keen to share the episodes they are proudest of so far.

Reece reveals, “It’s hard; it’s like choosing your favourite child! The ones that people like are the ones that make them cry weirdly, it’s not the comedy it’s the ones that move people. I’m really surprised that Bernie Clifton’s Dressing Room took such a grip on people. We thought it was a good one but we didn’t think it would be so moving and heartfelt. It was a vehicle for me and Steve to do a two-hander, that’s where it was born from, we had never done one where it was just us two.”

Steve adds, “The joy of Inside No. 9 is even half way through an episode you don’t know if it’s going to be a happy or sad or a funny one, and we really enjoy that about it. The whole ethos behind it is to never let the audience sit back and let it wash over them; you’ve got to engage with it.”

Inside No. 9 returns on Monday 3rd February at 10pm on BBC Two.

In this article:Inside No 9, Reece Shearsmith, Steve Pemberton