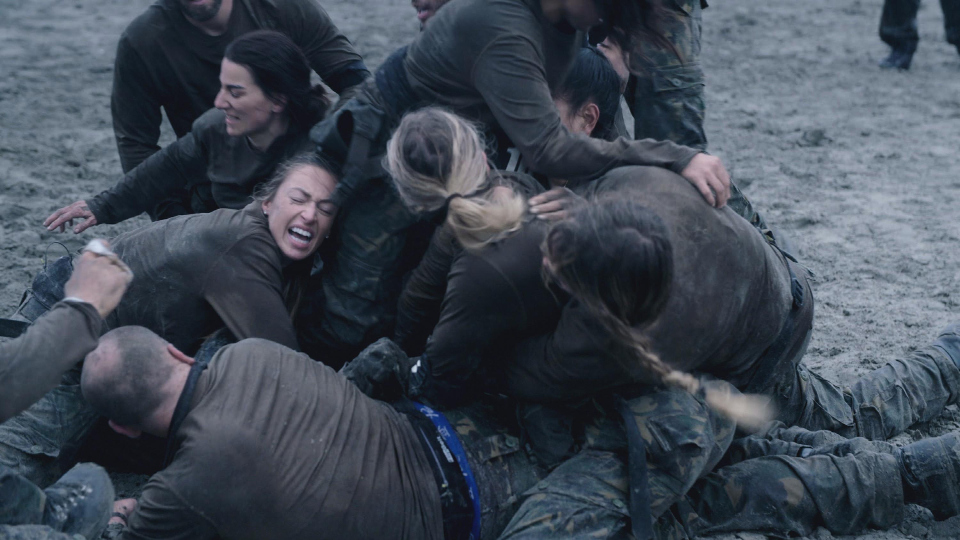 On the latest episode of SAS: Who Dares Wins, the focus for the remaining 18 recruits was Unity.

The latest challenges began with the ruthless picking of team leaders. The recruits were forced to name who they felt was the weakest member of their team and that recruit then had to lead them for the next 48 hours. Number 11 Kirsty and number 16 Oliver were chosen. They had to confront their weaknesses and inspire their teams to do well in this phase, and save themselves from being culled. The teams battled it out in the remote and exposed landscape of Scotland in three brutal tasks.

They were pitted against each other in a challenge called Surf Immersion – a notorious military water beasting that simulates water torture. This saw the two teams of recruits link arms before laying on the shoreline in the freezing water as the waves repeatedly broke over them. Number 16 Oliver was the first to give in which disqualified his team.

The teams had to work together to carry a heavy log up a mountain. This task demanded co-operation and co-ordination. The teams needed to keep moving while rotating members to ensure everyone had chance to rest. Oliver’s team made it to the top first and then all the recruits had to race down to the bottom after the weather took a terrible turn. This challenge really took it’s toll on some of the recruits who decided enough was enough before handing their armbands in.

The teams also had to face-off in a game of Murderball – an aggressive close combat exercise that’s a bit like rugby but the teams have to fight over a tyre.

Later, Jay was finally taken off the course and revealed as the fifth member of the Directing Staff. The reveal came as a shock to the remaining recruits and the DS wasted no time in getting Jay’s full opinions on everyone. His intel proved vital in deciding who to cull and number 2 Elouise and number 11 Kirsty were booted out.

In episode 4, the grit of the remaining 13 recruits is tested even further than before in this unique version of SAS selection.

With Jay’s undercover status now revealed, he leads a brutal beasting to expose the weakest members. After gathering crucial intel about the recruits during his time with them undercover, Jay singles out four individuals for extra scrutiny. Those who do not have the mental strength to make it through will be culled.

In this article:Ant Middleton, Channel 4, SAS Who Dares Wins