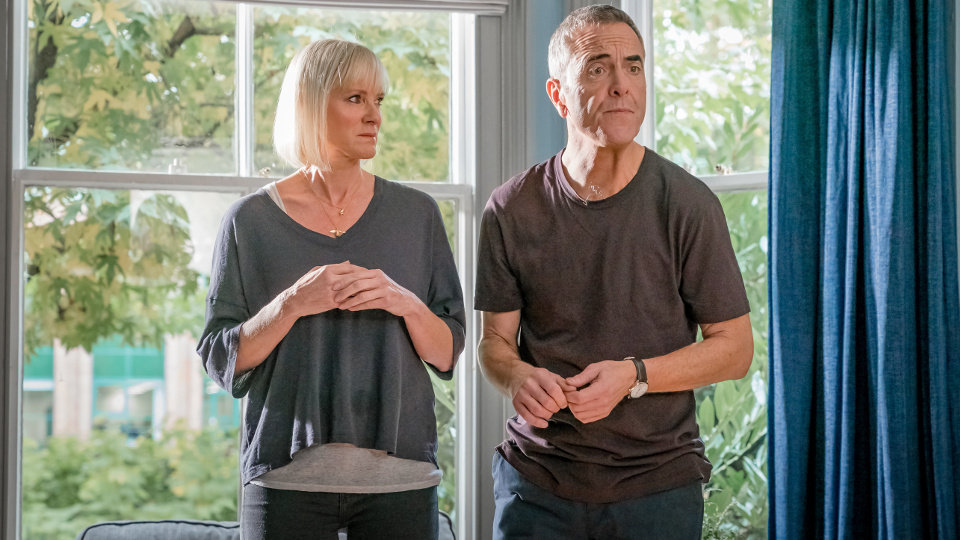 On the latest episode of Cold Feet, Karen (Hermione Norris) had a surprise house guest.

The episode opened up with a dream sequence where Adam (James Nesbitt) imagined a perfect morning since moving in with Karen. It was soon interrupted when he awoke for real and found things were far from perfect. Matt (Ceallach Spellman) had left the bathroom a state before Ellie (Sylvie Briggs) jumped in next. Down in the kitchen Adam dodged his way around the chaos of the family getting breakfast. He found himself last to everything and decided to call a house meeting.

Adam presented everyone with a large colourful spreadsheet that he had put together. It featured a rota for everyone in the house to follow with the aim of making things run more smoothly. Everyone poked fun at it but Karen agreed they’d give it a go.

Everyone was shocked when a knock at the door turned out to be Karen’s mother Heather (Gemma Jones). She’d called ahead about visiting and a distracted Adam and agreed to it without realising. With no room for her to sleep, Adam suggested Matt and Olivia (Daisy Edgar-Jones) share but Olivia wasn’t happy. Instead Olivia decided to stay at a friend’s house so that Heather could use her room. David later found out that the friend was actually his ex-wife Robyn (Lucy Robinson).

Heather later overheard Karen and Adam talking about how many hours it was until she left. Karen tried to talk to her mother about it and found out why she had come to visit. Karen said it would be ok for her to stay longer if she needed.

Meanwhile, Pete (John Thomson) was called up for jury service which he was super excited about. He took the whole thing very seriously and dressed up in a nice suit. At the court he found that he was the only one taking it so seriously and had a fight on his hands to make sure that things were done properly. The case involved a girl called Laura (Sacha Parkinson) who was on trial for possession of drugs with intent to supply.

Jenny (Fay Ripley) considered attending a breast cancer support group but then met up with Karen for a coffee instead. She had an idea for a book about her experience of having cancer. Karen thought it was a good idea but explained that it had been done many times, mainly by celebrities.

Jenny then paid a visit to a memorial bench for her friend Charlie Sinclair (Ivanno Jeremiah) who died of cancer last series. A touching scene saw Jenny sat on the bench where she imagined Charlie was sat with her an he gave her some advice. Back home Jenny’s mum Barbara (Marji Campi) found her crying in the bathroom and suggested she try the support group or talking to her friends.

With Mary (Michelle Holmes) away, David (Robert Bathurst) was left in charge of the cafe and looked to be really enjoying himself. That was until his old boss Roger (Gerald Kyd) showed up with a work colleague called Deborah (Sunetra Sarker). David was embarrassed and tried to stay out of view before eventually serving him. David was insulted when Roger tried to tip him, so put the money in the charity box instead. He then confronted him and said what he really thought of him. Deborah came back the next day and explained that she was actually Roger’s boss and that she wanted David to come and give a talk about his experiences.

Elsewhere in the episode, Pete arranged for Adam and David to meet him at the pub to try and get them to make friends. Pete commented that it was like trying to get Oasis to reform and forced them to shake hands. The pair wanted to ignore each other so Pete told them about his jury service to get their opinions. They used the conversation to just keep insulting each other. Pete was called home but before he left he told them that the three of them would be doing a sponsored walk up Scafell Pike.

Jenny went to the breast cancer support group and was able to sit and chat with other women who had been through the same ordeal. She found the experience useful and it helped her talk about her feelings with her family. They listened and Pete understood that she was feeling depressed and they all offered their support.

At the end of the episode, Adam and Matt went to see the verdict of the trial where Pete was on the jury. After a speech from Pete, the jury agreed to find her not guilty for possession of a controlled substance with intent to supply. Adam thought that Laura looked familiar and suddenly realised that she was the child that he and Rachel (Helen Baxendale) had tried to adopt back in series 4!

Can’t wait for the next episode? Read our Cold Feet series 9 episode 3 preview.