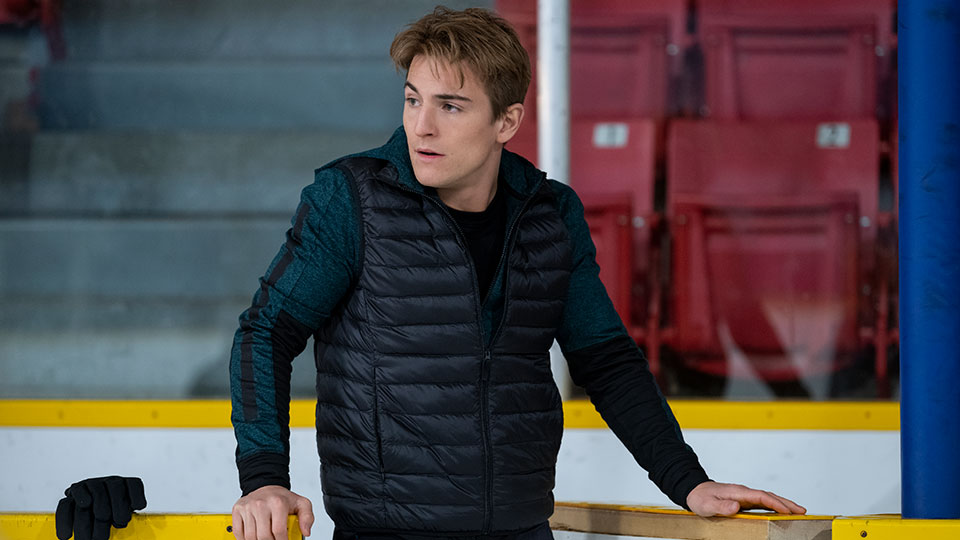 I caught with Evan to find out more about the show, discuss his character Justin Davis, and to talk about the training that went into perfecting his ice skating skills…

You’ve kicked off 2020 with a brand new show on Netflix and you’re one of the lead actors in it. What can people expect from Spinning Out?

So much! Basically, the story’s centred around Kat Baker, she’s an elite level figure skater, a single skater, who’s thinking about quitting after a pretty nasty fall strips her of her confidence. Through a series of events she gets this opportunity to try to pair skating and that’s where the story takes off. It’s romance and she’s dealing with mental illness. It’s all this stuff thrown into one big pot. It’s pretty dramatic and it’s pretty intense.

Your character is Justin Davis, who seems to be the bad boy on the show and he’s Kat’s skating partner. What do we need to know about him going into the show?

He’s a pair skater, he’s an Olympic hopeful and he’s one of the better skaters in the region. He has a bad attitude and a penchant for partying that gets in his way sometimes. With characters like him, I think there’s a lot more going on under the surface and you discover that as the season moves forward.

The first episode plants the seeds that there’s tension and drama among Justin’s family. Can we expect that to play out more as the season progresses?

Yeah, absolutely. There’s some classic architecture in this story with the oppressive father and how tough it can be to find yourself when your dad doesn’t necessarily agree with all the things that you do and doesn’t agree with your values. I think that can be a challenging thing in life. The story definitely addresses those issues.

What attracted you to the show and made you want to be part of it?

I read the scripts – I read five in one night – and I just cruised through the scripts. I loved them so much. It was the characters and how layered all the characters where, I just wanted to get to know them and and figure out where they’re all going. Beyond that, I felt some sort of kinship with Justin. I felt like I understood him on some level and I could do him justice.

What was it like working with Kaya Scodelario and January Jones?

Kaya was amazing. I loved working with her. She’s one of those super intimidatingly cool girls. She’s always blasting the Rolling Stones. She’s so cool and so grounded, I loved working with Kaya. January was very sweet as well. Unfortunately, I didn’t get to work with her very much. I don’t think I had one scene with January in the whole show but she was fantastic as well. It was great working with both.

Spinning Out is getting a lot of praise for the way it explores mental health issues both with Kat and her mother. What’s your take on the way the show has handled that?

Personally, I haven’t been around these kind of issues in my own life so it’s kind of hard for me to say, but I think it is important to say that this is just one family’s depiction of bipolar disorder, and one family struggling with it. I think that we did a pretty good job of depicting it and showing what it’s like to deal with this illness in everyday life. Some people are going to resonate and some people won’t but I think we tried to be as authentic as we possibly could.

Canadian skaters were your stand-ins for some of the skating on the show but did you have to do training yourself to be able to skate in any of the scenes?

I did! I got a part at the end of November. I trained for a month in Vancouver by myself and then I did three weeks with Kaya in Toronto, which was so much fun. We fell a bunch, did a bunch of faceplants… it was really, really tough to get used to even the basics of figure skating. Me and Kaya were freaking out before the shoot. We were like, ‘are we going have to do a lot of this stuff?’ and it turned out we didn’t. We had to do the basics like striding off the ice and striding onto the ice. It was super challenging and super fun and we were lucky enough to have some pretty amazing doubles that were literally Olympic level figure skaters so that made things easier.

Is ice skating something that you’d done much of before the show?

Yeah. I was a hockey player. I played for 15 years. I started playing hockey when I was five and I quit when I was 19. I grew up in rinks but figure skating is so much different than hockey skating. The balance of the blades… there was this toe pick on figure skates that literally was like a tripping device for me. I could not wrap my head around how it was useful. It was super challenging. I literally had to relearn how to skate, but eventually I got the basics down.

Ice skating terrifies me. I’ve tried it twice in my life and I hated it both times. I just can’t get to grips with it…

(laughs) It’s terrifying. Figure skating, beyond hockey, is so much more terrifying. People in hockey are like, ‘oh there’s body checking and all this’ and I’m like, ‘dude, there are people in figure skating, pair skating especially, being thrown five feet into the air with no helmet and no pads whatsoever’. They are some of bravest people in sports. It’s pretty amazing.

You got to work alongside Johnny Weir on this series. What was that experience like?

Johnny is the sweetest guy in the world. The 2010 Winter Olympics were in Vancouver and I remember watching Johnny Weir skate and thinking, ‘this guy is like David Bowie on the ice. This guy is amazing’ and then literally 10 years later, the end of the decade, I’m skating with him. We were such good friends by the end of the show. He was so supportive and so patient with us because we were all trying to learn literally the most basic stuff and he’s doing triple toes and spinning, jumping on the ice and just amazing us all. He was so fantastic to work with. I loved Johnny.

It must have been an incredible experience to have somebody of that calibre on the ice with you. It must be quite intimidating?

Oh, it’s insane. There’s extras, too, for these big arena scenes with a big audience and in between takes Johnny would just do these crazy jumps and he was getting these legitimate reactions from people. They should have kept the cameras on for that because he was doing some amazing stuff. It was pretty cool to see.

Spinning Out hasn’t left the Top 10 on Netflix in the UK since it was released. What kind of reaction have you been seeing from fans on social media?

Oh, man! I tried to go into this without much expectation because you never want to put too much expectation into it as you don’t want to be let down. I’ve been so pleasantly surprised with the outpouring of support from people. People really seem to be loving the show and really responding to it, whether it be the mental illness aspect of it, the romance or just any of the family tensions and the struggles. I’m just amazed with how people are resonating with the story. It’s great.

Viewers are gravitating more towards human dramas and away from superhero shows at the moment. Do you think that because the characters in Spinning Out are relatable and it’s telling a very human story, that’s what’s pulling people in?

I think so. It’s really is a family drama. A lot of my friends, guys who I grew up with playing hockey or whatever, a lot of them came from families where our dads were kind of old school guys who don’t necessarily think figure skating is a sport that’s admirable, when it completely is. A lot of my friends seemed to resonate with a lot of that kind of family tension and family struggle. I think there’s a character in this story for everybody. There is such a human quality to the story and such a human quality to these characters. They don’t feel like superheroes, they’re just regular people trying to make it work. I agree with you. I think people really do resonate with the family drama aspect of the show.

With the reviews from critics and fans being so strong, are you confident about a season two renewal?

Oh God, I hope so. I’d be lying if I said I haven’t been thinking about that every day. I hope so. I’m super confident and super proud of the product that we have created. That’s pretty much all I can say. I’m just hoping, like the rest of us fans, that we get a season two.

You were part of the Arrow cast before you got the role on Spinning Out. How are you feeling about Arrow coming to an end this year?

Stephen Amell, I don’t know how old he was, but he’s been playing that part for almost 10 years. That’s got to be emotional for those guys. I feel the swing of these more kind of human dramas coming back with some of these superhero shows wrapping up. I wouldn’t be surprised if you see a lot more shows in the same vein as Spinning Out in the next five years or so.

It was really my first foray into acting. It was first part. I think if I hadn’t had my experience on Arrow, I don’t think I’d have been ready to do Spinning Out. I learned from guys like Echo (Kellum) and Stephen Amell. Watching them, how they talk to people on set, how a whole set operates… it was such a well-oiled machine. I think I couldn’t have learned from a better show.

Is there anything else you have coming up this year?

Not at the moment. I don’t have anything planned other than just hoping to be back for a season two with the Spinning Out gang. That’s really just at the front of my mind right now.

Spinning Out is streaming on Netflix now. Watch the trailer below:

Advertisement. Scroll to continue reading.
In this article:Evan Roderick, Netflix, Spinning Out