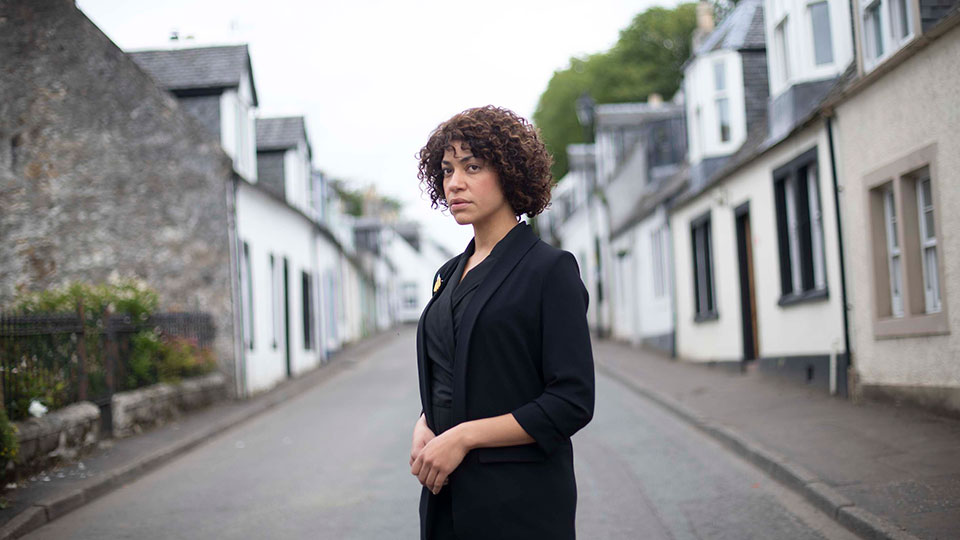 Cush Jumbo is perhaps best-known to audiences as Lucca Quinn in the hit CBS series The Good Fight, which airs on More4 here in the UK.

Her latest role sees her returning to the UK to star in Deadwater Fell alongside David Tennant, Anna Madeley and Matthew McNulty. The gripping drama begins tonight on Channel 4 and it’s a mystery that unfolds across four episodes in the aftermath of a tragic house fire that kills four members of the same family.

Talking about the essence of the series, Cush says, “Deadwater Fell is the examination of a traumatic event that effects a community, and that community exploring how much each of them has played a role in what may or may not have happened.”

In the show Cush plays the character of Jess, the best friend of one of the house fire victims Kate Kendrick (Anna Madeley). Teasing what to expect from her character she reveals:

“Jess is what you would call a slight outsider to the community, she wasn’t born there. She is from the city, a very different atmosphere, but ended up meeting Steve and becoming part of this village. She became stepmother to his two young sons, and she slipped into a life she hadn’t particularly chosen, but seems happy with, she thinks. When we meet her we realise she is a procrastinator- she isn’t quite sure what she wants out of life and so there is always a slight air of discontentment about her. When this terrible tragedy happens that involves the possible murder of her best friend and the children, she is forced to question what it is she really cares about. Whether she’s been noticing anything in her life at all or has just kind of been going with the flow. She becomes more and more determined to uncover the truth and that makes her discover what she really wants and who she is.”

Cush shares a lot of scenes with Matthew McNulty (The Bay), who plays her boyfriend Steve. What should viewers know about their relationship going in to the series?

“They seem pretty happy, but there’s tension in their relationship. Steve has an ex-wife who lives nearby and two small boys that ping-pong between the two families. Jess and Steve are also trying to have a baby via IVF because Jess has been unable to conceive naturally. That brings its own sense of failure. Everything that goes along with the IVF treatment is putting additional pressure on them, they’ve already had one failed attempt. On top of that there’s the question of whether Steve actually wants to have another kid at all or whether he’s just going along with it to please Jess. Then there’s her best friend Kate’s life, which to her, seems completely perfect with its huge house and lovely husband and kids. She’s constantly comparing herself to that without realising what she’s seeing is a façade. Steve and Jess love each other but they don’t communicate well. It’s not until this tragedy happens that they really start to put their cards on the table and examine whether their relationship is going to be able to survive some of the secrets they’ve both kept in the past.”

Playing the best friend of Kate, do viewers have a reason to suspect that Jess could be something to do with the fire? Cush lets viewers into what their friendship is like by commenting:

“It’s a relationship I hope an audience will recognise. Jess and Kate are best friends and they have a very close friendship that has been built up over the years. Each friend trusts each other and vents to each other and laughs with each other. They also work together. You believe that these are two women who would tell each other anything and everything, who would share each others’ secrets. Jess has always aspired to be more like Kate. She has never, ever thought Kate would like to be more like her which ironically Kate does. When she loses Kate she also realises she feels completely alone in the village. Aside from Steve Kate was her only real connection and yet she wasn’t aware of everything that was going on with her. That makes her question whether the friendship was real at all.”