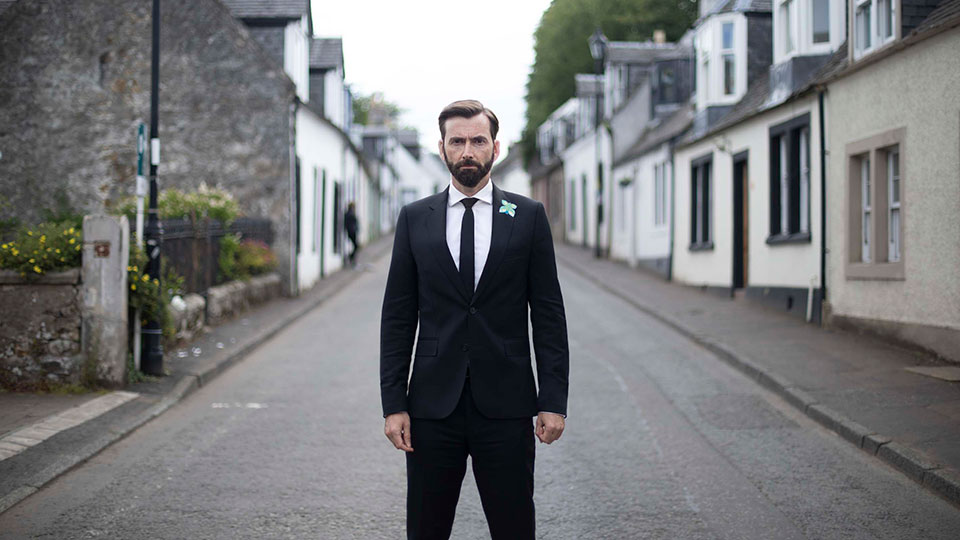 David Tennant is one of the stars of Channel 4’s gripping new crime drama Deadwater Fell, which starts tonight at 9pm.

Explaining the premise of the show, David says:

“Deadwater Fell is set in the small Scottish village of Kirkdarroch. Tom Kendrick is the local GP and his wife, Kate, works in the local school. They have three beautiful children and are very much at the centre of the community. Very early on in our story, a terrible, tragic event happens; their house burns to the ground and the family are all wiped out with the exception of Tom who survives. With their best friends Jess and Steve, the community start to look into what exactly happened: was it an accident or something darker at play?”

His character is very much at the centre of the unfolding mystery so what do we need to know about him going into the show?

“So, Tom Kendrick is the local GP, a father of three and that’s very much a part of his identity. He is very much the centre of the community of Kirkdarroch. He’s respected, well liked and seems to be the perfect family man with a happy marriage. There doesn’t seem to be anything untoward in his family life. To the outside world he’s the perfect father, the perfect husband, he’s popular and admired and people look up to him and his world revolves around that.”

Deadwater Falls marks David’s first time as an executive producer on a show. Discussing how that experience was for him, he reveals:

“They’re two very distinct things. For me, as an EP on this it’s just about being involved in some of the decision making elsewhere and having a little part in that. This was not a case where the scripts needed great wrangling, they’re beautifully written by Daisy Coulam. And the cast came together very easily because they responded to that material and we got great people involved on the crew. It was just nice to have a small involvement in bringing that team together and being part of the process. And also it was learning from Karen Wilson and Emma Kingsman-Lloyd at Kudos who are so, so experienced in that world. It was great to be in on some of those meetings and see what it takes to put together a television production.”

When it came to getting involved with the project, David says that it was the script that really grabbed his attention.

“The script. Just the script. It always is really, for me. If you read a script and it connects with you, it touches you, it intrigues you and you think “I don’t want anyone else to do this because I want to do it,” that’s really the clincher. I read the first episode and was intrigued and compelled by these characters. I didn’t feel like I quite knew what everyone’s story was and that of course makes you want to know what happens next. I think Daisy created very real characters, very believable characters, and also characters that had a real history to them. That was immediately intriguing.”