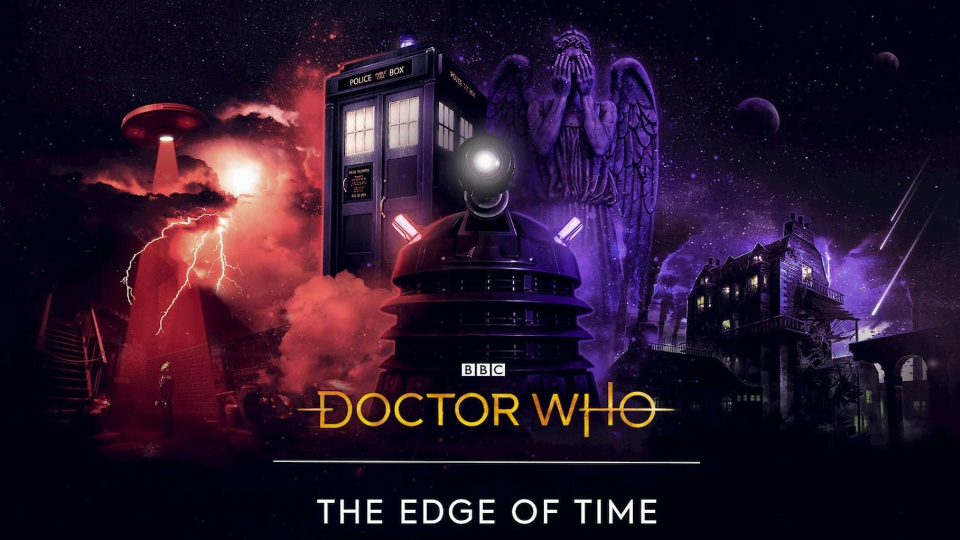 Am I the biggest Doctor Who fan in the world? No. I don’t dislike it but I’ve fallen away from that world. Now that developer Maze Theory has brought us this universe in the immersive VR platform, I hope Doctor Who: The Edge of Time can reel me back in as a fan.

The plot in Doctor Who: The Edge of Time is as simple as it gets. You are somebody, who is at a laundromat and you receive a call from The Doctor. She tells you that time itself is in danger and only you can save the world. Given no time to distrust her, you are attacked by monsters and The Doctor tells you she is trapped at the end of time and needs help.

Watch the launch trailer for Doctor Who: The Edge of Time below:

Saving the universe is par for the course for any episode of Doctor Who and this is no exception. The plot is beyond basic, which would be fine if we were given something to hold onto. You see, you have absolutely no on screen interactions with any character in the game. Everything is either told to you by a hologram or through a recording. Doctor Who is all about The Doctor and the companion and there isn’t much of either. The Doctor not being on screen, leading you from, or towards, danger by hand is a serious misstep. The plotlines of Doctor Who rely on this dynamic and it’s completely gone. By the time the credits roll, it feels more like a deflation than a big bang.

There are two core gameplay elements in The Edge of Time. The first is the puzzle system. If you’ve played a game (especially a VR game) you’ll know exactly what kind of puzzles they are. They aren’t challenging and “lining things up” gets dull quickly. VR titles run into this issue so often, it’s becoming tiring. When your face is pressed into a fusebox or a wiring system, you can’t differentiate between the game you are playing and a similar one and that takes you right out of the experience. In VR, this is a big no-no.

There is no exploration to be had here, which is forgivable for a VR title. The second gameplay element is the stealth sequences and this is where the game sees some improvements. As you would expect from a Doctor Who adventure, there are several recognisable enemies. Cybermen, Daleks, Weeping Angels and more take centre stage and are a great, threatening presence. The Weeping Angels are the most terrifying and while the Daleks never scared me in the core series, they are formidable in this one. This is really good stuff and the game doles out some very effective scares. As a fan of horror I love it but I’m not convinced the bulk of the fan-base will enjoy them. The core series may have scares aplenty but never as intense as this.

As far as locomotion goes, the game supports both snap and smooth turning. The highest smooth turning setting felt pretty slow, it may be a slow game but it bugged me a little bit. The PSVR version supports both the DualShock 4 and the Move controllers. I’d recommend the Move controllers if you have them, as they help with the puzzles a great deal.

I can let a lot slide with visuals on a VR title and I had to here. It’s not ugly by any means but if this was meant to bring in fans or to celebrate the series, the visuals don’t quite hit the mark. Importantly, Maze Theory have done a great job with the scaling, which adds to the feeling of immersion. The frequently great sound design also adds to that immersion and goes a long way in delivering the effective scares. Voice acting is uniformally great, with Jodie Whittaker as The Doctor being a standout. The soundtrack is passable but the theme song really hits home, especially in its awesome VR cutscene.

As a passing fan, it has failed to bring me back into the fold and I highly doubt it’ll bring in many new fans. Die hard fans will get a kick out of seeing their favourite bad guys but if you want to run through time with The Doctor as her companion, you will be disappointed. The lack of combat is fine but the lack of an adventure is not. The same generic puzzle systems we see time and time again get tiresome and I’d much prefer to focus on exploring a level and interacting with characters as a companion. The fact the game succeeds as a horror title is so strange and juxtaposes the core concept of the title. It’s certainly a pleasant surprise but probably not what most people are looking for. It has its moments but at just 2 hours long, I don’t think it’s the best Doctor Who experience you can get.

Doctor Who: The Edge of Time was reviewed using a digital code provided by the publisher.

In this article:Doctor Who, Maze Theory, PlayStack, PS4, PSVR, The Edge of Time