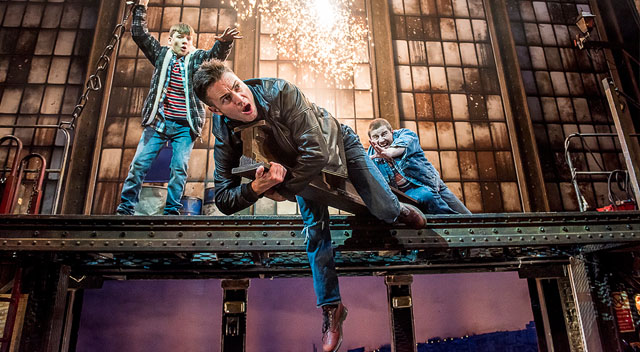 An all-star cast reveals all this week as the stage adaptation of hit Nineties comedy The Full Monty arrives at Leeds Grand Theatre.

The action takes place in late Eighties’ Sheffield and follows the struggles of a group of unemployed steelworkers, desperately seeking their next job. When they stumble across a sold-out ladies night featuring the Chippendales, Gaz and his pals decide they can probably make an honest living the same way. All they have to do is audition a few more members and perhaps learn to dance…

Adapted for the stage by the author of the film, Simon Beaufoy’s first theatrical outing is an evenhanded transfer of the original story. Whilst it brims with crude, bawdy and often brilliant humour, the underlying message remains a sad one: the unemployed factory workers are so desperate for an income they’ll literally sell their modesty for a buck.

Laughing at middle-aged men dancing in their Y-fronts is easy; recalling the struggles of Northern industry which crushed so many families in the Eighties is a more sobering ordeal. That’s the genius of Beaufoy’s tale, as the motivation feels so desperately real.

The company of The Full Monty.

A company of familiar faces make up The Full Monty’s lineup. Andrew Dunn provides a warming performance as Gerald, the aspirational middle-class manager who shamefully hides his unemployment from his wife. Kai Owen also steals scenes as a plump, insecure and self-loathing Dave, whilst Louis Emerick charms the house as ailing Northern Soulster, Horse. James Redmond hands over a memorably shocking — and pointed — performance as Guy ‘the lunchbox’, whilst Joe Gill’s semi-tragic Lomper feels like a study who’s stepped out of an Alan Bennett play — and it works.

Gary Lucy is an alluring ringleader as Gaz, and whilst some of his northern inflections don’t always fly straight, he undeniably captures the charm and swagger of an imperfect young father. A note must also go to young Frazer Kelly, who in this instance played his son with excellent comedy timing and vocal clarity.

The show’s production qualities are impressive, offering a dirtied down and rustic set which constantly evokes the depressive social erosion of the era. With innovative lighting and pointed details, scenes in a Job Centre and social club are perfectly realised, transporting audiences back to a recent time with simple scenic changes. There’s also no shortage of impressive practical stunts and effects to add further spectacle.

The Full Monty is a well-produced, skilfully engineered show with a fine story at its heart. Whilst it capitalises on broad physical humour and plays on the anxieties of its inevitable finale, it ultimately exposes a desperate point in our economic history with flashes of satirical brilliance. Sharpened for stage and presented in its most visceral and uncensored form, this is bare-faced comedy stripped down to its best.