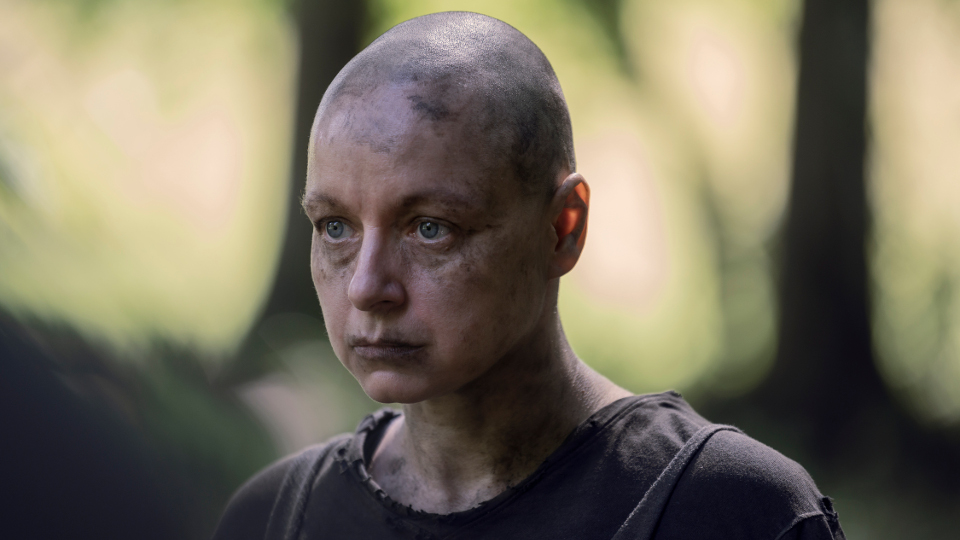 In the season 10 mid-season finale of The Walking Dead, we found out how Dante (Juan Javier Cardenas) came to be a spy and a group of the survivors went to try and destroy Alpha’s (Samantha Morton) horde.

The episode opened up with a flashback to Alpha giving Dante his mission to infiltrate the survivors. She wanted him to get inside their walls, be helpful but cause problems from within. We saw how Dante did this and that he was responsible for sabotaging the water supply and defacing the community with “Silence the Whisperers”. Alpha promised him a special place in her group if his mission was successful.

The episode then moved to where the last one ended after Dante killed Siddiq (Avi Nash). He was about to stab Siddiq’s body in the head to prevent him turning into a walker when Rosita (Christian Serratos) called by with baby Coco. Dante tried to say that Siddiq had gone out on a call but Rosita sensed that something was wrong.

She placed her baby in the bath and a fight broke out. It looked like Dante had overpowered her but she fought back and delivered many hard blows to his head. Next she had to deal with a reanimated Siddiq and did so by stabbing him through the head. It was a brutal opening to the mid-season finale.

Dante was detained and locked up in Negan’s old cell. He was surprisingly open about his mission and the parts that he had played. He was confident that the community would have to put him on trial and doing so would also help things unravel. Before a decision was made, Gabriel (Seth Gilliam) paid Dante a visit and stabbed him to death. We’ve not seen Gabriel snap like this before which is sure to cause further issues.

Meanwhile, Michonne (Danai Gurira) was still on her trip to Oceanside with Luke (Dan Fogler) and Judith (Cailey Fleming). Luke proposed a stop a library so Judith could get some new books to read. During the stop, walkers attacked Luke but he was saved by a mystery man.

They continued on to Oceanside and Michonne received the news about Siddiq. At Oceanside, she told them to be extra careful in vetting new community members. Recently their had been several unexplained events at the community and their scouts caught the man who had saved Luke. Michonne spoke with him and he revealed that his name was Virgil (Kevin Carroll). He was looking for a boat to get back to his community who were based at a military installation on an island. He proposed that if she helped him get home he could repay the debt with weapons to fight the Whisperers. After a quick chat with Judith, Michonne and Vigil headed out to sea.

Elsewhere in the episode, Aaron (Ross Marquand) continued his efforts to talk with Gamma (Thora Birch). She asked if the baby was still alive that they saved from the Whisperers as it was her nephew. Now she knows that Alpha had lied about killing Lydia she asks to see her nephew and in return gave up the location of the horde. She also told Aaron that her real name is Mary.

Aaron took the news and went off in search of the horde with Daryl (Norman Reedus), Carol (Melissa McBride), Jerry (Cooper Andrews), Connie (Lauren Ridloff), Kelly (Angel Theory) and Magna (Nadia Hilker). When they arrived at the location they found animal traps but no sign of the horde.

Carol spotted Alpha watching them and gave chase. The rest of the group followed and Alpha led them into some kind of cave. Once inside they all fell down and found themselves trapped on a platform surrounded by the horde!

The Walking Dead season 10 will return in February 2020 on AMC in the US and FOX in the UK.