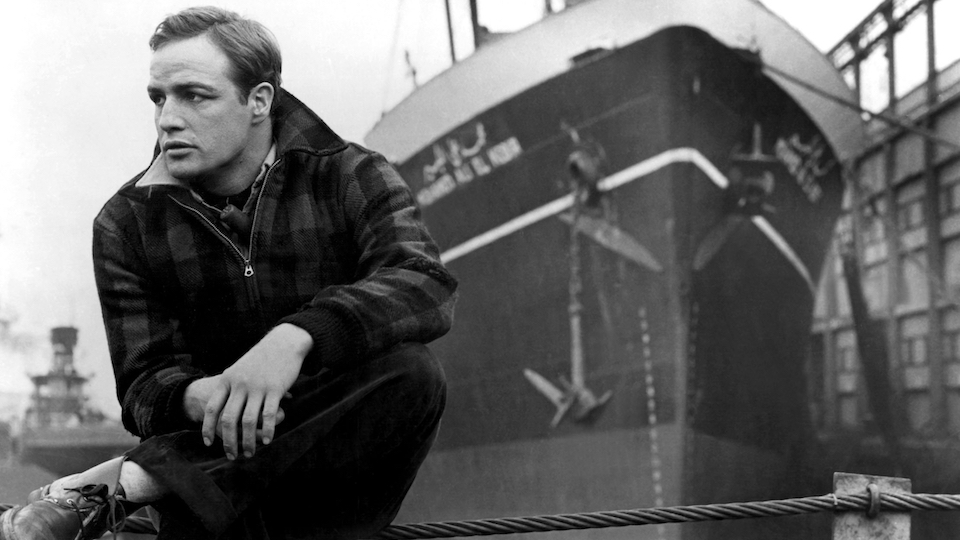 When On the Waterfront was released in 1954, it was widely considered to be director Elia Kazan’s response to those who criticised him for naming names during the communist witch hunts that had haunted and scarred Hollywood during the early 50s. Kazan has largely denied the film was made as an attempt to justify his actions, but when the film is a battle ground of moral conflict – as On the Waterfront is – it’s a hard connection to ignore.

Regardless of the fascinating subtext however, what cannot be disputed is that On the Waterfront is an all-time classic. Mixing gritty neo-realism with the melodrama of a Hollywood gangster flick, Kazan created something new and fresh with this vivid and sensitive depiction of blue-collar workers, and the corrupt system looking to rob them of their dignity at every turn. Added to this you have the revolutionary method acting of Marlon Brando and Rod Steiger, whose work in this film arguably shaped the future of screen acting.

Set in the hardscrabble world of the New Jersey docks, Terry Malloy (Brando) is a retired boxer, now working as a longshoreman, and doing occasional jobs for Johnny Friendly (Lee J. Cobb), the mobster who controls the local union. Through intimidation, violence, racketeering, and loan-sharking, Friendly has taken complete control of the port. Nothing comes in or out without his say, and no one works unless they kick up to him.

When a fellow longshoreman is murdered by Friendly’s goons, Terry starts to question his loyalty to the union. Things are complicated by his brother Charley (Rod Steiger) being Johnny’s right-hand man. And if his conscience wasn’t tested enough, he then ends up romantically involved with Edie (Eva Marie Saint), the sister of the murdered man.

There are five key elements at play in On the Waterfront, that contribute to its near perfection. The first is undoubtedly Budd Schulberg’s screenplay, which so brilliantly merges the two styles of the film, whilst also delivering iconic, street-wise dialogue. Then you have the stark, naturalistic cinematography of Boris Kaufman. Next is Leonard Bernstein’s beautiful and mournful score. Of course, you then have Kazan himself, who vividly captures life on the waterfront, imbuing the film with a European neo-realist sensibility. Finally, there is Brando, in his first Oscar winning role, giving arguably the most influential performance in film history.

Appropriately enough for a cinematic masterpiece such as this, the overall package provided by Criterion is absolutely superb. There is a commentary track from film historian Richard Schickel and film producer and Elia Kazan expert, Jeff Young. Martin Scorsese and Kent Jones is a conversation recorded in 2012 exclusively for Criterion, with Scorsese talking about On the Waterfront. As ever, any time you get to listen to Martin Scorsese waxing lyrical about cinema it is truly a beautiful thing.

Elia Kazan: An Outsider is an hour-long documentary from 1982, in the form of an in-depth conversation between Kazan and French film critic Michel Ciment. This is truly fascinating stuff, as he talks about his films, his views on acting, and of course the HUAC testimony that would go on to define him.

“I’m Standin’ Over Here Now” – Reconsidering On the Waterfront is a 45-minute documentary produced exclusively for Criterion. This in-depth analysis looks at the film from a more scholarly point of view, putting it into a social and historical context. There are new and archival interviews with Eva Marie Saint, Elia Kazan, and Thomas Hanley. Who is Mr. Big? is an interview with writer James T. Fisher discussing the historical basis for the film, and the real-life events it depicted.

Contender: Mastering the Method is a documentary from 2001 discussing the film’s most famous scene, and the stunning performances from Brando and Steiger. There is also a video essay considering the unique score by Leonard Bernstein. The final special features on the disc are the original trailer, and a terrific little short featurette exploring the multiple aspect ratios of the film. This is very cool, especially if you are a bit of a cinematography nerd. It also leads very nicely onto the second disc, which gives you the option of watching the film in the alternate ratio formats captured so brilliantly by cinematographer Boris Kaufman.