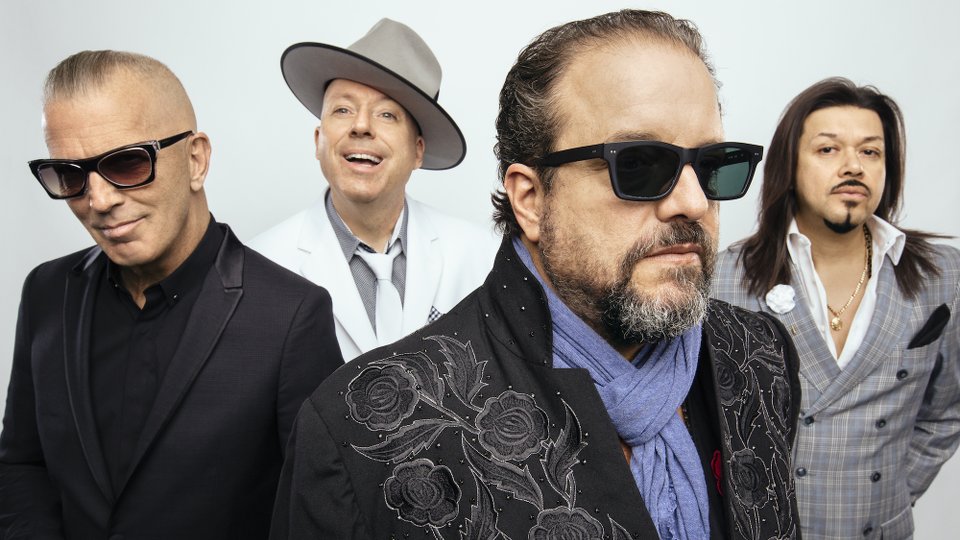 Whenever you mention The Mavericks to most people in the UK, the first thing they’ll think of is the band’s catchy crossover 1998 hit Dance the Night Away. Oddly Dance the Night Away was only a minor hit in the US and didn’t enjoy the commercial success it did in other parts of the world. The success of that single propelled their album Trampoline into the UK Top 10 but they never really managed to score any further big hits on this side of the pond. In the US they were already a big deal in Country music having scored Top 10 albums with What a Crying Shame in 1994 and Music For All Occasions in 1995. The band has remained prolific with their most recent album Hey! Merry Christmas arriving in November 2018. A year on, the band is back with new record Play the Hits.

Play the Hits sounds like it’s a greatest hits collection but what it actually is, is a collection of covers of songs that inspired and influenced the band. The 11 tracks feature classics from the likes of Waylon Jennings, Elvis Presley, Patsy Cline and Willie Nelson. Play the Hits opens with Swingin’, originally by John Anderson, and you can see why the band chose it as it’s not a million miles away from the sound they became famous for. With each of the covers, the band has put their own spin on them, making them sound like songs from their own back catalogue.

Are You Sure Hank Done It This Way?, originally by Waylon Jennings, maintains the spirit of the original song but gives it a jollier production. The arrangement is fuller, designed to be played live and sure to get a party started. A foot-stomping rendition of Patty Loveless’ Blame It on Your Heart incorporates a mariachi influence and it’s very catchy. You can imagine this one also going down well when played live. It has all the elements you need to encourage audience interaction.

Elsewhere on the record The Mavericks take on Elvis with a solid cover of Don’t Be Cruel, enlist Martina McBride for a cover of the soulful Marvin Gaye and Mary Wells song Once Upon a Time, and transform Bruce Springsteen’s Hungry Heart into a traditional honky tonk floorfiller, which works surprisingly well. For their version of Patsy Cline’s Why Can’t He Be You, they change the gender to She and it sounds a little French-influenced to my ears. If they’d sung it in French, I would have thought it was an Edith Piaf cover.

The strongest moment on the record is the emotive version of Before the Next Teardrop Falls, which sees the vocals sung in English and Spanish, just like the original Freddy Fender track. I actually prefer to hear The Mavericks in a more stripped-down setting this song really sticks out as a favourite on the album.

Closing number I’m Leaving It Up to You, originally by Dale & Grace, is fairly faithful to the original but there’s more brass in the arrangement. It gives the song a harder beat and it brings the record to a perfect close.

Play the Hits is an interesting album. It’s always nice to understand and hear the influences that bands and artists have, and with this record The Mavericks have taken their favourite songs and put their own stamp on them. If you’re a fan of traditional Country you’ll find plenty to enjoy and if you liked the originals, you may well appreciate these new takes. Play the Hits is a solid enough album and a reminder that The Mavericks are always worth a listen.

Track list: 1. Swingin’ 2. Are You Sure Hank Done It This Way? 3. Blame It On Your Heart 4. Don’t You Ever Get Tired (Of Hurting Me) 5. Before the Next Teardrop Falls 6. Hungry Heart 7. Why Can’t She Be You 8. Once Upon a Time (feat. Martina McBride) 9. Don’t Be Cruel 10. Blue Eyes Crying in the Rain 11. I’m Leaving It Up to You Record label: Mono Mundo Recordings via Thirty Tigers Release date: 1st November 2019 Buy Play the Hits