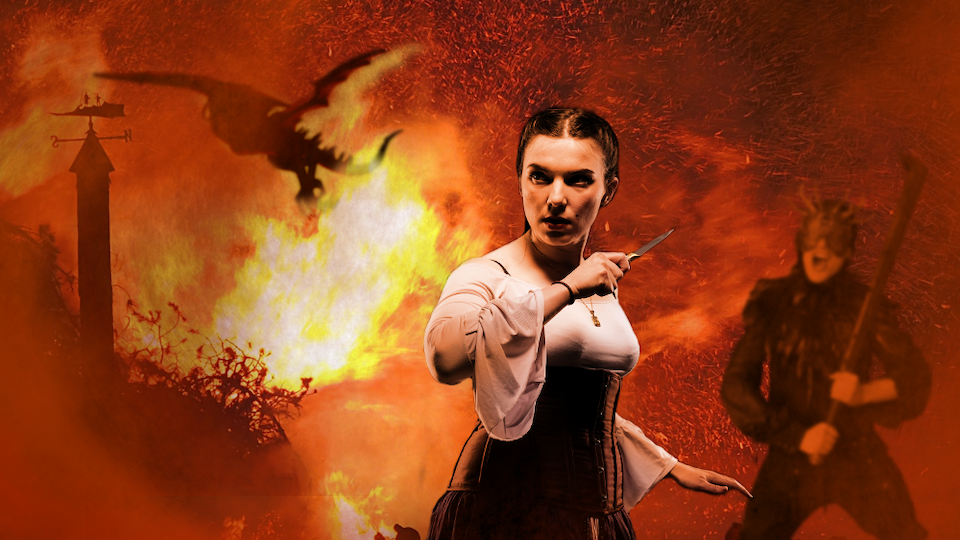 Each month at London’s Museum of Comedy the eight-strong group of comedy improvisers known as Hivemind Improv shape a fully improvised feature length fantasy story with help from the audience.

Move over short games, and make way for an entirely ad-libbed hour long comic book story! Full of dizzying action sequences, special effects, and live music, prepare to be taken on a madcap journey across time and space in Improvengers: Pretendgame. Hivemind may not have CGI, or a billion-dollar budget, but they do have enthusiasm…and a heavy-duty crash mat. The Age of Ultron is over – it’s time to usher in the Age of Improv.

When the gang isn’t playing the hero, devious plotting abounds on the last Friday of every month when Hivemind improvise a medieval fantasy adventure of epic proportions. Filled with blood and wine, honour and treachery, fellowships and actual ships. Armed with only a map the audience draws to guide them, Hivemind improvise the Lord of the Game of the Ring of Thrones – a tale that has never been told before, and will never be told again. Disclaimer: no dragons will be harmed in making these legends.

Founding member of Hivemind Improv, Alex O’Bryan-Tear, said: “What we love about fantasy is that every story is set in a completely different world, with its own culture, its own rules of science and magic, and its own people. That’s how each night feels unique.”

Fellow member, Harriet Cartledge, added: “Creating an improvised hour-long play is obviously a challenge, but so satisfying. I love when we create an entire story from scratch, and afterwards people ask if we had written any of it in advance. That’s when you know the work is paying off!”

Accompanied by a fully improvised live score, both shows are a hit with fans of improv comedy and fantasy storytelling alike. Earlier this year, Hivemind enjoyed successful runs at the Edinburgh Festival Fringe with both Lord of the Game of the Ring of Thrones and Improvengers: Pretendgame. Previous Hivemind shows include Stick and Twisted, Playlight Robbery, Brainstorm, and An Offer You Can’t Refuse.

For more information – including on how to book Hivemind for private entertainment such as birthdays, weddings, Christmas parties or corporate events – visit www.hivemindimprov.com

In this article:Game Of Thrones, Hivemind Improv, Lord of the Rings, Marvel, Museum of Comedy