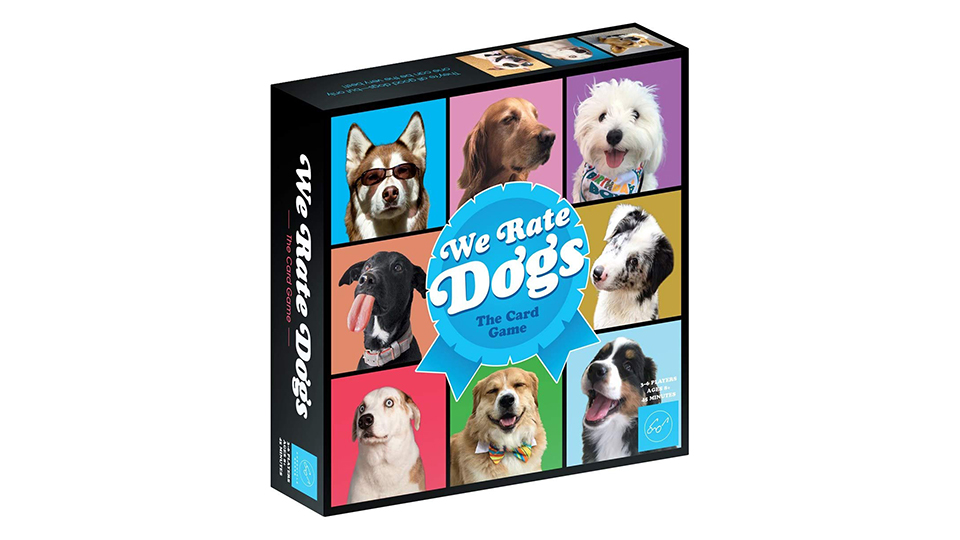 Set up in 2015 by college student Matt Nelson, We Rate Dogs is a Twitter account that asks followers to send in photos of their dogs so they can be rated. The account then selects some of the photos sent and gives them a rating out of 10 (although it’s usually more) and accompanies them with a humorous comment. Due to its success, the account has spun out its own online store and a book. Now We Rate Dogs has its own game, We Rate Dogs: The Card Game.

Suitable for ages 8+ and requiring 3 to 6 players, We Rate Dogs: The Card Game has a very basic objective – get your dog the highest rating in the competitive categories to win the game. The best way to describe the game is like Top Trumps but with a much cuter twist. Cards are drawn from the Shelter Deck and placed in the middle of the table, the number of which is determined by the number of players plus one. Each played takes it in turns to pick a dog and this process is repeated until each player has the number of cards equal to the number of players plus one.

Each of the Shelter Cards has a different dog on it and a number of categories including Floof, Sass, Boopabilitiy, Zoom, Ears, Wag and Goodness. Which category is in play is determined by a role of the Category Die and each player has to play the Shelter Card they believe is their best chance to win. This can be thwarted by others players who can use Event and Reaction cards throughout the game to change the category to their advantage, add and deduct points, and other devious things.

Three turns take place and the winning dog advances to the Winner’s Circle where they could go on to win the whole game. The game repeats the round process based on the number of players playing and then it’s time to determine The Goodest Dog in The Winner’s Circle. Every player gets a chance to compete, even if they didn’t advance a dog to The Winner’s Circle, as there are Dogrates cards that are basically dogs no one picks or knows. In this final stage the category judged is Goodness and once three turns have taken place, it’s time to crown the winner.

The first thing to note about We Rate Dogs: The Card Game is that it is a little bit complicated to get to grips with. It’ll take a few rounds of playing before you really get the hand of it. That’s something that does go against it in terms of enjoyment factor as games, I think, should always be quick to pick up. Players are more likely to persevere if they are familiar with the Twitter account or are dog enthusiasts themselves.

The use of Event and Reaction cards adds a competitive challenge to the game and definitely keeps things interesting. There are also optional rules that can help extend the length of the game and keep players involved, even if they don’t manage to get one of their dogs to The Winners’ Circle.

Where perhaps the game does fall down a little is there isn’t a whole lot of skill involved in playing it. Sure you can pick your dog for each round so you have to discern who is most likely going to win but the Event and Reaction cards make it very unpredictable. It’s a little bit random in terms of which dogs progress and which don’t but that shouldn’t hamper the fun too much.

If you’re a fan of We Rate Dogs on Twitter, you’ll likely love this game. It captures the spirit of the original account and while it is a little complicated, it’s fun once you get into it. The dogs are all very cute and the idea behind it, which is to appreciate and love all dogs, is a nice message to be putting out there into the world. The replay value may not be as high as you’ll expect but it’s still a fun game to play with family and friends, and one that should go down well over the festive period.