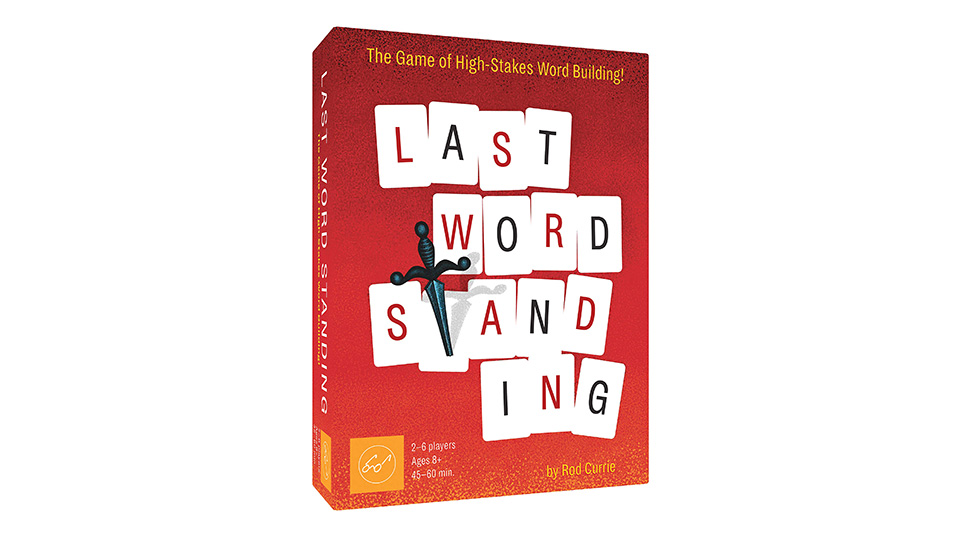 As we’re hurtling towards the Christmas season, it’s common to look for games that you can play with family and friends over the festive period. From old classics like Trivial Pursuit and Scrabble through to newer games such as Cards Against Humanity and Exploding Kittens, there are plenty of options out there. Personally, I like to look for a new game that I can introduce people to and one that’s crossed my path this year is Last Word Standing, by Rod Currie and published by Chronicle Books.

Essentially a cross between Scrabble and Upwords but in card format, Last Word Standing is a game for all of you spelling lovers out there. The premise of the game is that you have to craft words using the cards in your hand, and available in the Community Cards (those placed in the centre of the table. Each turn you spell out the longest word you can and make a note of the point total using the points denoted in the top corner of the cards. For words over a certain length there are bonus points available too so it’s in your interest to make as long a word as possible.

Once the player has played, the rest of the players can try and beat that word by using their own cards, any Community Cards in play, and by utilising action cards to steal and borrow letters that have been played by another player. Once everyone has taken their turn, the last word standing is the one that scores the highest points. It’s important to note that action cards sometimes let you add and deduct points from your or other words to help you gain the advantage. The first player in the game to move their counter to 75 on the score board is the winner.

It really is a pretty quick game once you get started but getting started is actually incredibly complicated. The rules booklet, yes booklet, is 12 pages long and it’s not as clear as it could be. I ended up watching various YouTube videos to try and figure out how on earth to play it. The first few rounds were a confusing mess and we played it wrong several times. Eventually, with some perseverance and a few threats of giving up, we got there in the end but some people might not.

When you think of those classic games that hold up year-after-year and demand repeat plays, they are often the simplest where anyone can jump in having never played it before and it feels straightforward. That’s the biggest weakness of Last Word Standing. Add to that the need to keep notes of who played what word and what it scored each round, and it becomes much more laborious than it needs to be.

There is a good idea in here but I feel that the game really does need simplifying. The box says it’s suitable for ages 8+. I would be surprised if anyone that young can figure out what the hell they’re doing. The age range in my rounds was late 30s to early 40s and we struggled. If you persevere, you’ll get enjoyment from the game but in my opinion it asks too much of you and that will make most people give up before they really get started.