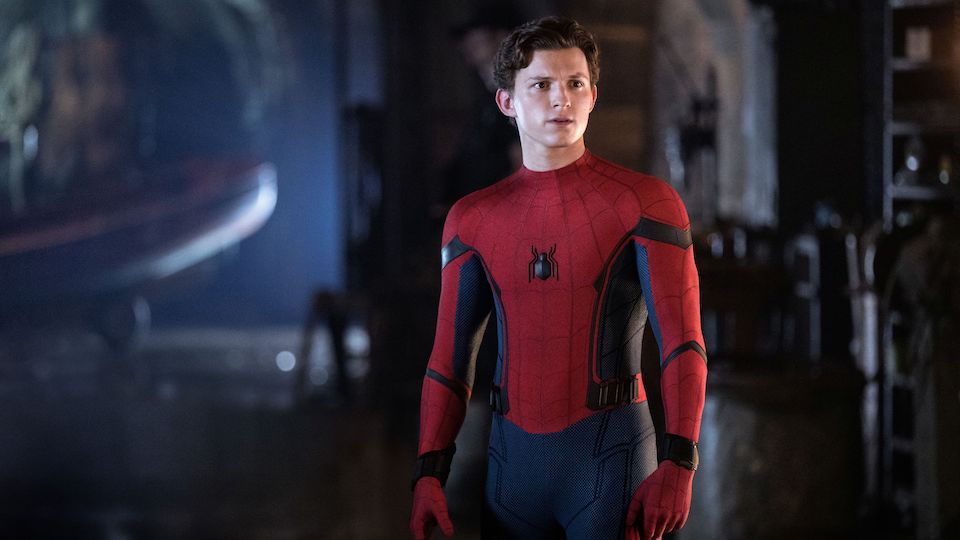 This review contains spoilers for Avengers: Endgame. You have been warned!

After a brief lovers quarrel between Marvel and Sony – that nearly resulted in this being the last time we saw Tom Holland’s Spider-Man in the MCU – you can settle down to watch this Blu-ray and relax in the knowledge that it’s all been sorted, and there’s going to be plenty more of Spidey-Tom in the future.

Faced with the unenviable task of picking up the franchise baton in the immediate aftermath of Avengers: Endgame, Spider-Man: Far From Home does an admirable job. Having to somehow tackle the earth-shattering events of Endgame, tell its own coherent story, and also give a hint to what the future of the MCU might hold, it’s a miracle the film stands on its own. Lessons from the past have definitely been learned.

After the trauma of Infinity War, and then the personally devastating climax to Endgame, we find Peter (Tom Holland) in an emotionally fragile place. The whole world is grieving for Tony Stark and the Avengers. The spectre of Stark literally haunts Peter in this film. Murals and memorials are everywhere he turns. The death of his mentor has left a huge hole not just in his life, but across the entire world, and all eyes are now turning towards Spider-Man expecting him to step up as the new leader of the Avengers. But after everything he’s been through, all he wants to do is go on holiday with his classmates and tell MJ (Zendaya) how much he likes her.

These things rarely go to plan though do they? As soon as they land in Venice, the city is attacked by an elemental force, that is only defeated following the intervention of Quentin Beck, aka Mysterio (Jake Gyllenhaal) a powerful superhero from another dimension. Turns out all that intergalactic time-travelling warfare in Endgame had some pretty profound effects on the universe. Peter wants nothing to do with this fight, but Nick Fury (Samuel L. Jackson) has other ideas, essentially hijacking the school trip in order to get Spider-Man involved.

This is a ridiculously fun film. From the hilarious tribute to the fallen that opens Spider-Man: Far From Home, director Jon Watts has got the tone just right. It doesn’t quite reach the heights of Homecoming, but with all the heavy lifting the script has to do (there is a lot of literal and figurative baggage here) it was always going to struggle to top the last film. Also, the thrust of the plot hinges on something that to be kind, is a bit bonkers, but to be honest, is actually a bit stupid. It does lead to some excellent visuals, but I’d be just as happy if none of this superhero shit was going down, and we just got to watch a delightful coming-of-age road trip movie with this cast.

I really love these characters, and they are a joy to spend time with. Holland and Zendaya are adorable at the heart of the cast, but are ably supported by Jacob Batalon, Angourie Rice, and Tony Revolori. There’s great chemistry and humour shared between them, and Jon Watts handles everything with a remarkable lightness of touch. Being attacked by elemental fire demons could really suck the humour out of a scene, but Watts always keeps the characters in focus.

It’s also a sneakily political film, making some pointed observations about the post-truth landscape we find ourselves in. Fake news is arguably one of the biggest societal ills we are facing, and for a Marvel film to probe at the edges of this, is perhaps an indicator of the direction the MCU might take in the future. Very exciting indeed. Oh, and there’s a mid-credit sting to stick around for, and it is one for the ages.

Once you’re done with the film, you can turn your attention to the extras, and this disc is absolutely packed with them. First up is Peter’s To-do List, a fun short film which feels like something ripped straight from the comics. There’s a gag reel which is surprisingly funny. These things are rarely as funny to the viewers as they are for the actors, but the footage of Tom Holland and Jake Gyllenhaal corpsing is genuinely amusing.

There’s 6-minutes of deleted and extended scenes, including a funny recreation of the snap/the blip by the students of Midtown High School. Teacher’s Travel Tips is a short feature with JB Smoove and Martin Starr in character, talking about what it takes to manage a school trip abroad.

The Jump Off takes a look behind the scenes of the films stunt work. If you were thinking that everything you see in this film is CGI then you’re in for a shock, as a great deal of it is surprisingly practical. This piece also brilliantly shows off what a gifted physical performer Tom Holland is. Next up is Stepping Up, a short featurette exploring the key theme of the film – the loss of Peter’s mentor Tony Stark, and what this means for Spider-Man’s future. This includes interview with all the main creatives, including director Jon Watts and MCU supremo Kevin Feige.

Suit Up is a cool little featurette about the suits Peter wears during the film, how they fit in thematically with the story, and the craft that goes into creating them. Now You See Me is a short piece about the character of Mysterio, again with lots of interviews with the main cast and crew, and plenty of behind the scenes footage.

Far Far Far From Home explores the locations for the film, and the opportunities it presents to take Spider-Man out of his natural habitat. It Takes Two is a fun behind the scenes look at the chemistry and understanding between Jon Watts and Tom Holland. Next on the disc is Fury and Hill, focusing on the two ex S.H.I.E.L.D. agents, played of course by Samuel L. Jackson and Cobie Smulders, who are back to play a big role in this film.

The Ginter-Riva Effect is a very short piece about the ultimate MCU call back featured in the film’s big reveal. Thank-You Mrs Parker takes a brief look at the character of May, and how she’s evolved and been updated from the frail old woman she was depicted as in the comics. Stealthy Easter Eggs puts the EDITH glasses on you, as Stark’s computer system takes you on a whistle-stop tour of all the visual easter eggs hidden throughout the film. Some are very obvious, whilst others are very cool and sneaky, and a bit meta.

The Brothers Trust is a short piece about the work Tom Holland and his brothers have done through their charity. There’s also a selection of pre-viz material, split-screened with the final film. And finally, there’s World-Wide Web Slinger, an in-depth making-of documentary, going behind the scenes of the film with all the main cast and crew.