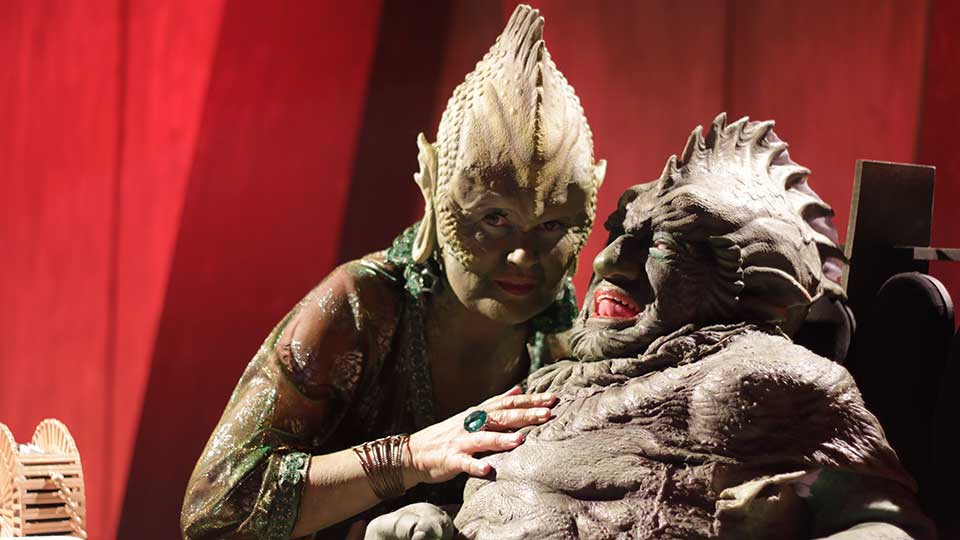 Sil and the Devil Seeds of Arodor is an independent production that takes viewers into the fantastical world of Doctor Who. Avoiding copyright issues, there’s no Doctor or TARDIS. What you will find is Nabil Shaban, returning to the role of Sil the Mentor. His cackling, money-grubbing villain first appeared opposite Sixth Doctor Colin Baker in Vengeance on Varos and the Mindwarp segment of The Trial of a Time Lord.

Sil has been caught red-handed peddling Devil Seeds – a dangerous narcotic that has health benefits to begin with, before it quickly destroys the lives of those addicted. Detained and facing trial on a moonbase, under threat of sentence of death if a guilty verdict is returned, it’s the tightest corner Sil has found himself in since he last crossed swords with the Doctor.

Adding a delightful ring of authenticity to the whole thing, it’s written by Philip Martin who created the character in the 1980s. Martin is a fine writer, having penned (amongst many other projects) the ingenious series Gangsters in the 1970s. Familiar with working within the restraints of a small budget and limited sets, Martin’s four-episode scripts are perfectly pitched to match the scope of the production. They also contain his characteristic wit and dark humour in abundance.

Continuity is also maintained between the Doctor Who world and Sil and the Devil Seeds of Arodor through the casting of many actors strongly associated with the show. Janet Henfrey (famously bumped off by vampires in the Curse of Fenric) brings her customary kind austerity to the part of the Adjudicator. Sakuntala Ramanee (Shreela in Survival) plays Larnier, the prosecution, and fan-favourite Sophie Aldred (Ace) plays Mistress Na. There’s also a return to screen of the character Lord Kiv, which Christopher Ryan reprises, though his brain has been transplanted once again, freeing the actor from a heavy make-up job.

The show undoubtedly belongs to Nabil Shaban. There’s something extraordinary about Sil when you think about it. He’s grotesque, self-pitying, selfish and immoral. And yet… it’s impossible to ever dislike him. It’s the charisma of Shaban and the hint of childish innocence he embeds into the part that warms him to viewers. I frequently found myself smiling in delight at Shaban’s performance, which is full of deviousness and conniving glances. There is a remarkable moment in the third episode when all of the stars align, and in a single take, Shaban delivers a monologue that spans the spectrum of emotions as Sil tries to think through an escape plan. It’s a great piece of writing, acting and direction in harmony, reminiscent of Brian Blessed’s death scene in I, Claudius, from the days in which directors trusted their actors enough to allow a monologue to proceed uninterrupted by a single edit. You wouldn’t see it on television now, and good for the producers for having the courage to execute it so well here.

Of course, on a tiny budget, Sil and the Devil Seeds of Arodor has its issues. The make-up on Sophie Aldred and Nabil Shaban doesn’t quite hold up to close-ups in high-definition, for example. But the scale of the ambition is impressive, and inventive lighting and economical use of space help to retain the credibility of the story. If anything, the limited sets and reliance instead on great scripts and performances imbue Sil and the Devil Seeds of Arodor with the heart and spirit of genuine Doctor Who. Is there an anti-Brexit, anti-Trump message in there? Yes, but it’s baked into the mix rather than front and centre. It certainly isn’t layered on with a trowel like the relentlessly virtue-signalling woke remake. This is proper stuff!

There is a lot to enjoy in Sil and the Devil Seeds of Arodor. Nabil Shaban, Janet Henfrey and Christopher Ryan take the acting plaudits, though it’s great to see Sophie Aldred playing against type as a reptilian seductress who couldn’t be much further removed from Ace. Sakuntala Ramanee seems at times a little uncomfortable selling the heightened realism of the science-fiction world, but on the whole the cast know and understand how to pitch their performance to the unique demands of the production.

Does it run dangerously close to similarity with The Trial of a Time Lord, the unloved Doctor who story in which the main character has to defend himself in a court of law? Not really. Philip Martin only uses the trial device to trap Sil within the narrow confines of a few locations. His scripts have plenty of sparkle.

Having seen a few low-budget Doctor Who spin-offs over the years, many of which were all-but unwatchable, I was dubious that Sil and the Devil Seeds of Arodor would offer fans enough to sustain their interest. Ultimately though, the production is solid, and works effectively within its budgetary constraints. Most importantly, Philip Martin’s scripts flesh out his much-loved character of Sil and create a compelling situation for him to survive in. The strong anti-drugs message is also commendable. Doctor Who fans – especially those whose heart lies with the original series – can enjoy a strange feeling of nostalgia for a brand new production. It’s one that punches above its weight.

There are numerous extras on the disc to please behind-the-scenes enthusiasts. Features include a lengthy making-of documentary (that reveals how cleverly-designed the remarkably small sets are), plus segments on everything from the make-up artist to the designer of Sil’s transportation. Special effects wizard Mat Irvine pops up in a short but sweet instalment to explain the moon’s orbit using a model. If you love original Doctor Who, get Sil and the Devil Seeds of Arodor in your collection or on your Christmas list.