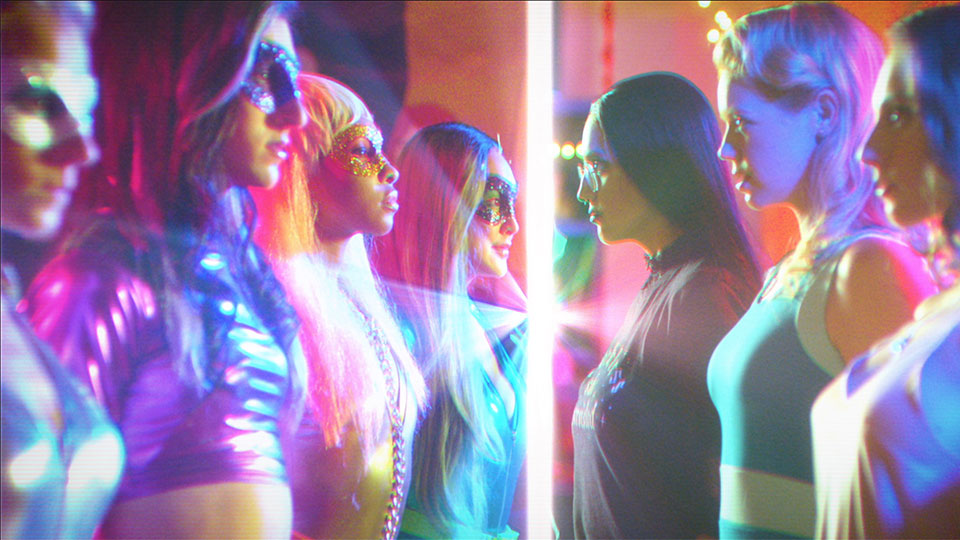 Kappa Force is a new Revry Original series that pays homage and pokes fun lovingly at rom-coms. The 8-episode series focuses around a bunch of sorority sisters that are secretly superheroes and are being hunted by a villain known as The Douche who has murdered one of their pack. New girl Jen (Madeline Weinstein) arrives at the sorority to discover that she has a goth roommate Chartreuse (Emilie Modaff) and that her best friend Penny (Emily Lane) lives across the hall. Jen quickly gets caught up in a love triangle with frat boys Brad (JJ Phillips) and Luke (Dan Wenzel Jr.) and befriends the Kappa Force gang.

Taking the form of short 5-7 minutes episodes, the first season of Kappa Force isn’t a huge investment. Each episode features a zippy pace and tends to focus on one aspect of the story. The opening episode The Douche’s Lair sets the scene for the next 7 episodes by introducing the villain and letting the audience witness him threatening, and eventually killing one of the Kappa Force ladies. What follows from there is a mixture of rom-com and superhero parody that works much better than you’ll expect it to.

Each episode pokes plenty of fun at pop culture and is filled with diverse characters both straight and queer. You’ll recognise plenty of the show’s songs as they are parody versions of 90s classics from the likes of Sarah McLachlan, Paula Cole and the Spice Girls. That adds to the zany feel of the series and keeps the pace ticking along nicely. There are plenty of laughs to be had and the colourful cast of characters will definitely keep you interested.

You can pretty much split the first season down the middle into two different storylines. The first is Kappa Force who are going about their business saving their fellow college buddies and trying to live to a normal life. The second revolves around Jen being the new girl and making her own circle of friends before she gets involved with the Kappa Force crew. At first the two plot lines seem a little disjointed but I think that’s purely because the episodes don’t have a whole lot of time to explore anything in great depth.

I enjoyed the performances across the board. Madeline Weinstein is already getting plenty of buzz for her roles in Alex Strangelove and Beach Rats but it’s the Kappa Force ladies who will really keep you entertained. Each one has their own distinct personality and I’d like to spend more time with them so I can get to know more about them. The episode lengths are cruelly short but they give you enough to keep you wanting to watch.

Kappa Force is a unique series and I hope it gets another season. If it’s elongated into more episodes or a longer run-time, I’d be happy about that too. Creator Addison Heimann has created a fascinating world that draws you in and he’s put a nice spin on the superhero genre. I’m interested to see where Kappa Force could go next so fingers crossed there’s more to come.