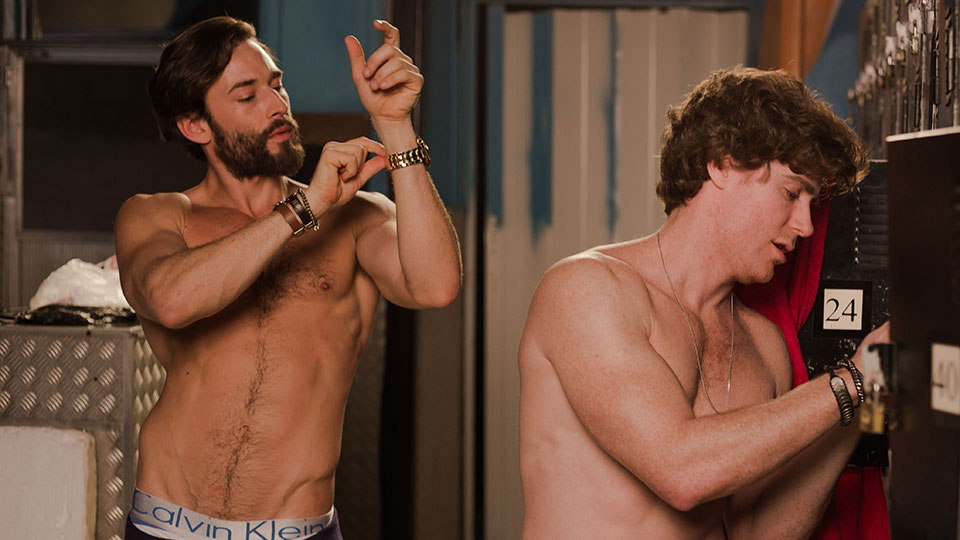 Married couple Tana (Carlos Takeshi) and Eros (Simone Mazzer) seemingly live ordinary lives. Having moved to the city so that Eros could pursue her dreams of being a singer, Tana spends his day running a construction supplies shop. Bored by their marriage, Eros devotes all her time to singing while Tana finds an escape at his local gay sauna where meets a group of handsome hustlers willing to do pretty much anything for money.

Copa 181 is the debut feature from Brazilian film-maker Dannon Larceda. It combines two contrasting but overlapping storylines allowing audiences to get a look at the stale relationship that exists between Tana and Eros and taking them inside the volatile affair that hustler Leo (Caetano O’Maihlan) is having with transgender sauna worker Kika (Silvero Pereira). Tana is just looking for an escape from his mundane life while Leo is supporting his wife and children by hustling at the sauna. Leo also has plenty of hang-ups around his sexuality, insisting that he’s straight but happily having sex with men for money and carrying on a relationship with Kika.

Larceda does a good job of taking you into world of the sauna. We witness the friendships that form there, the dangers it holds and the aggressive sexual encounters that take place. Kika turns a blind eye to everything, hoping that Leo will reciprocate her feelings but knowing deep down inside that he’s not a good guy. There’s one scene that takes place between the two where Leo is on drugs and drunk, and gets aggressive towards Kika demanding money and unafraid to use his fists to get what he wants.

Where the film falls down is in its focus. It establishes Tana and Eros from the beginning but then it feels like the focus completely switches to Kika and Leo. Tana and Eros become almost background characters so the emotional impact of their relationship is somewhat lost along the way. Leo is such an unlikeable character that you don’t really want to spend time with him but you don’t get a choice. As for Kika, we never realty explore her story in enough depth to care.

The acting is fine. Caetano O’Maihlan is the standout as the obnoxious and plain awful Leo. The camera loves his good looks and chiselled body, and he does a good job of making Leo completely unlikeable. Silvero Pereira is solid too as Kika but I wish we’d got more in the way of story to hold on to and explore for that character.

Copa 181 is an OK film but it’s not going to demand repeat viewings. The narrative is all over the place and the promise it starts with soon dwindles. If intense and graphic sex scenes are what you enjoy, there’s a couple of those but beyond that titillation, there’s not a whole lot to see here, which is a real shame.