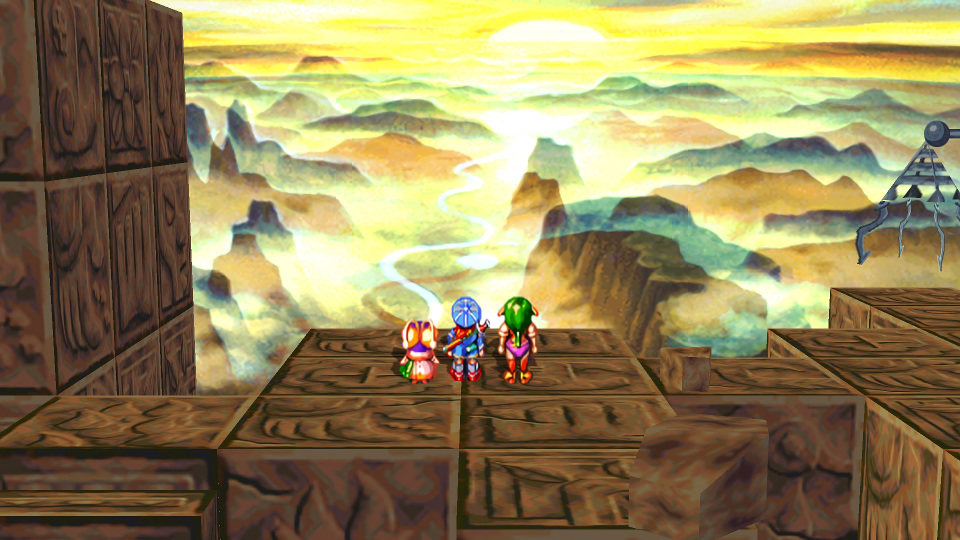 Grandia is a series that was doomed from the start. The first title came out the same year as Final Fantasy VII and we all know which game won that battle. Despite having a couple of solid titles, the series is long dead. Yet the first title holds a strong cult following. Hitting PC for the first time, does Grandia stand the test of time?

In Grandia, Justin aspires to be a globe trotting adventurer like his late father. He lives with his mother in the port town of Parm, during a time of technological advancements. Whilst playing “Adventurer” around town with his friend Sue, Justin receives a call from the local museum curator. The curator hands him the Spirit Stone, a magical gemstone from the ancient civilisation of Angelou, where magical beings ruled. This was left by his father and the curator knows it holds certain powers. Justin must travel to the nearby Dom Ruins to find out what happened to his father and the Angelou mysteries. There he finds the army of General Baal, who is hellbent on discovering the secrets for himself. Justin makes contact with a celestial emissary of Alent, the city of the Angelou and is told to travel across the world in search of it.

While it’s a simple tale, it uses its strong cast to its advantage. Justin is a boisterous hero, sassy but genuinely cares about helping people. Sue is Justin’s younger friend, wise beyond her years but afraid of the journey to come. Feena is a legendary adventurer, who longs for freedom from her duties. Even the villains have juxtapositions to their personalty and how they form or clash is outstanding to watch. Yes, there are betrayals, yes there are enemies who turn to the light, yes there is a romance that blossoms but it’s all done brilliantly, even by today’s standard. The characters drive the plot perfectly. The story isn’t scared to go to places you don’t expect and it pulls it off. It really does stand the test of time.

The combat system is a simple but brilliantly executed one. When you engage an enemy a bar appears on the screen. This dictates who goes first. If a character you control hits the action bar first they go first and you have many options at your disposal. Using simple attacks, magic, skills and items works as expected but the critical hit option changes the flow of gameplay. When you choose your option and execute it, the bar continues to move a little bit after the input segment, if you land a critical hit to an enemy also on this segment their turn is cancelled. The more complex the move you choose to make, the longer it takes and critical attacks can be vital to a win. Magic and skills work on a simple premise, the more you use it, the better it gets. Some magic and certain skills require a mixture of, say fire and sword EXP to unlock so experimentation is key. You can learn new magic elements by finding elusive mana eggs in the game world. There is plenty of items and weapons to equip and it all comes together to create a neat package, combat wise. The downside to the combat is that it’s pretty easy, some bosses can be pretty challenging but overall, it’s a pretty easy game.

While it’s far from an open world, there is a fair amount to explore in the segmented zones. The variety of enemies keep you on your toes and all of the enemies are visible on the map. While exploring the various wild-lands, towns, dungeons etc., you are rewarded with EXP and items but are no side quests in the game. This isn’t rare for games of that era but for modern gamers, the linearity might be off-putting. That’s really all the game has to offer on the gameplay front. There’s no post-game, this is old fashioned, straight up story and that’s fine.

View some screenshots from Grandia HD Remaster in our gallery:

For those who played the original, there aren’t many changes on a visual front. The sprite based models looked great for the time and those who like “retro” games will find them charming. The 2D character portraits are great. Environments show their age but are textured well. The camera still has the sluggish effect that it had on the PS1, great for nostalgia but might be tough for newcomers. All in all, it looks great. The soundtrack remains one of the greatest soundtracks ever made. It’s just incredible from start to finish. Voice acting is awful across the board. If you can tolerate it or enjoy the “old bad voice acting”, then you’ll be fine with it but those expecting a little more will be disappointed.

Grandia has one of the best stories in gaming. The fact it is held in as high regard as Final Fantasy VII says a lot. I think hour for hour, the story is stronger. The combat is simple but has enough depth to make you want to engage enemies. As a port, there’s not much in terms of extra features but it’s fine. Put simply, if you like JRPG’s, you need this.

Grandia HD Remaster was reviewed using a retail copy bought by the reviewer.