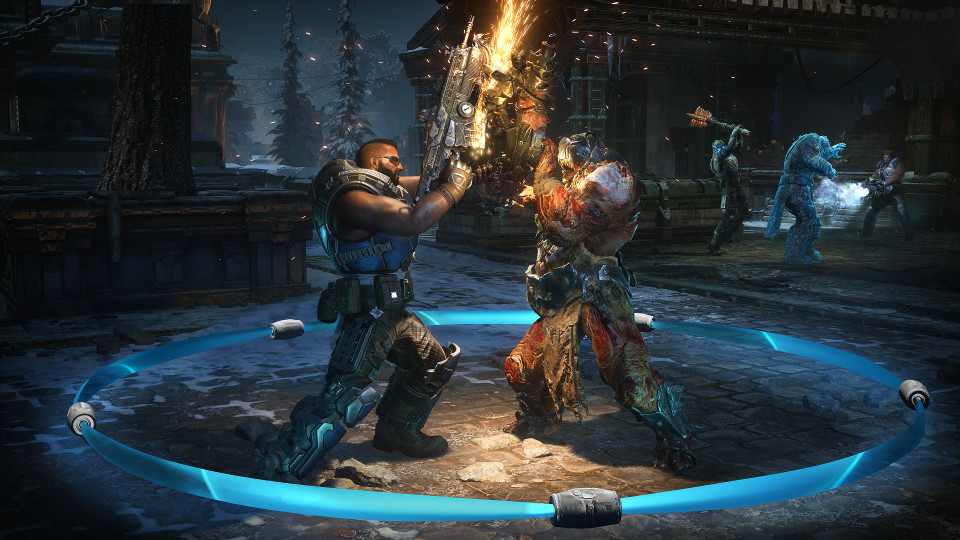 As a gamer, I’m firmly rooted in single player modes. That being said Call of Duty, Battlefield, Red Dead Redemption and (oddly) Bioshock 2 all had multiplayer modes I poured hours into. Speaking of Gears of War specifically, I spent many hours in both Gears of War 3 and 4’s Horde mode. While this isn’t my area of expertise as such, let’s see if The Coalition have managed to improve the formula.

Let’s start with the obvious, Horde mode. For the uninitiated, Horde mode is a wave based mode, pitting you against increasingly difficult wave of bad guys. Of course, it’s as great as ever. There’s a couple of changes, building off Gears of War 4’s strong attempt. The class system is back and more important than ever. The Engineer and Support class make their return but the Tank and Support offer new ways to play. The most impressive addition has to be the ability to play as Jack, your robot sidekick from the campaign. He can zap enemies and go invisible after a short time, this is great for less skilled players but you can definitely get a lot done as Jack if you are a skilled player. All of the classes have an ultimate ability, which are life saving in later rounds.

Watch the Gears 5 Horde trailer below:

Escape is the newest mode. In Horde, you stand your ground against the enemy, in Escape you run like the wind. With limited ammo and time, things become desperate and killing everything in the map will end in failure. You have to plot your way through the enemy and to safety. It’s a blast.

Versus mode is back with it’s selection of modes. Team Deathmatch is exactly the same as always. It boils down to who hits first and if you can perfectly time your rolls. People may tire of being one-shotted with a shotgun but if you get your timing down, it can be exhilarating. King of the Hill is self explanatory, an objective version of Team Deathmatch. Escalation is a lot of fun, you start off with nothing and have to scour the map in search of weapons. Dodgeball and Arms Race round out the multiplayer suite. Dodgeball has you revive when an ally gets a kill and Arms Race rewards you for killing with certain weapons.

Arcade mode is a great way for more casual players to get involved, you play the same modes as before but you can carry more weapons at once and get upgrades as you go. This is the mode you want if you wish to master a certain weapon.

I spent most of my time in Horde mode, like Call of Duty’s Zombies mode, it’s impossible to put down. Things get really hectic later on and the inclusion of Jack and the ultimate abilities are essential to survival, it’s awesome. Escape was a fun mode but you really need to play with friends you can plan with, playing with strangers doesn’t work that well. It’s perfect for those who don’t want to spend hours on Horde mode. Team Deathmatch was great, it’s much faster than games like Call of Duty and the heavy footed characters are certainly divisive but the “Safe Spawn Time” feature is great. Like Gotham City Imposters, you are immune to damage for a couple of seconds after a respawn. Small quality of life improvements are abundant in Gears 5 multiplayer and they all add up nicely. I didn’t spend as much time with the other modes but from what I played, they all do a good job.

It looks great as well, of course lacking compared to the campaign but uses HDR brilliantly. Performance on the Xbox One X was a locked 60fps, with no noticeable dips.

The only issue I can really think of, is if you don’t like Gears multiplayer. The Coalition have made no attempt to draw in new players, so bear that in mind. That being said, if you liked the previous titles multiplayer efforts, you’ll be very happy with what The Coalition have done. Let’s address the obvious elephant in the room and that’s the microtransactions. Your usual litany of cosmetic upgrades are here as are EXP boosters. It represents the sad, desperate state of modern multiplayer as my hearts bleeds a little every time I see them. The moment to moment gameplay is still utterly fantastic though.

To see what we thought of the singleplayer, check out our Gears 5 campaign review.