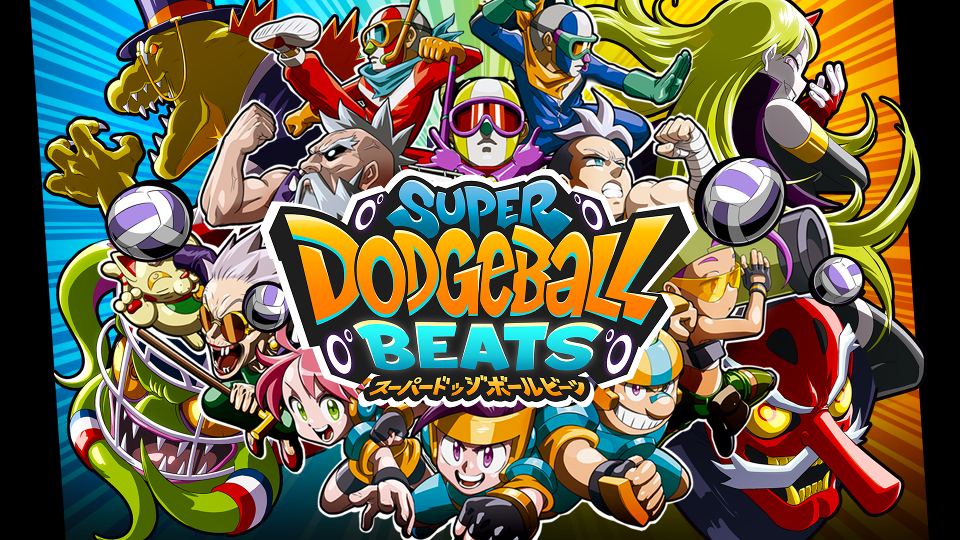 I can’t count how many hours I’ve put into Guitar Hero and Rock Band. My back account is terrified of the words “Rock Band” due to some form of PTSD. With Super Dodgeball Beats, I finally have a Rhythm game where I don’t have to sink several hundred pounds into.

As far as story goes, you play as the Sigma Nerds Club, a 4-person dodgeball team. You’ll be pitted against bizarre rivals but there are no plot or character interactions.

With the rival team on the left of the screen and yours on the right, you have a countdown on the bottom of the screen to indicate the time you have because as this is a rhythm game, you play to a song. Each of your 4 characters represent a face button and has a small ring around them, a secondary ring will appear and you have to press the corresponding button as the new ring hits the old one. This alone has potential for difficulty but could easily get repetitive.

Super Dodgeball Beats has a few additions to keep things interesting. The variety of button presses adds in the challenge, sometimes you have to hold the button down and release at a certain time, others you have to spin the analogue stick. The trickiest one has you hit a button and hold the stick and pass the ball to another character and release. Each of these are simple in their own right but when they are mixed up and coming at a fast pace, things get tough. Unless you are some sort of madman, it’s very unlikely you’ll hit every single beat and the game understands this. The top of the screen has a bar which sways to the winner and it’s generous enough to the point where you never feel as though a few missed button presses is unrecoverable.

Each song is 3 minutes, at a push and is over quickly enough. Besides the button presses you also have power-ups. When you press a button you get points based on whether you are early, late, or perfect and this charges your power meter. The powers obscure the screen or immobilise a character (who can only be freed with a perfect button press) but the enemy team can also use these, which is why hitting every note requires an incredibly skilled player. These would feel frustrating if the game wasn’t so generous with its meter system. Overall, it’s not too difficult in its early stages but it gets pretty challenging later on.

The art style is really good, it has a Flash animation style and it works excellently. The character designs are all crazy, from samurai, to cats, vampires and more. There’s plenty of nice character animations as you hit or miss notes and each victory ends in a face off between the teams and you launch your balls at the rivals faces. The performance was perfect, no instances of slowdown on either docked or undocked play. Outsides of shouts of “hey” whenever you hit a note, there’s no voice acting which is fine. The soundtrack was OK, it was standard EDM with night-core elements. Not really my kind of thing but it served its purpose well.

View some Super Dodgeball Beats screenshots in our gallery:

Although I wish there was a little story, even if it was done through a comic panel style, I had a blast with this. It manages to be challenging without frustrating, which is a balance few rhythm games manage to do right. The track selection isn’t huge and there aren’t a big host of rival teams but there’s enough and while I didn’t get to test it, there’s a multiplayer mode which will make or break many friendships, as all good multiplayer does. Super Dodgeball Beats does everything it sets out to, I wish it did a tiny bit more but I was more than satisfied with what I got.