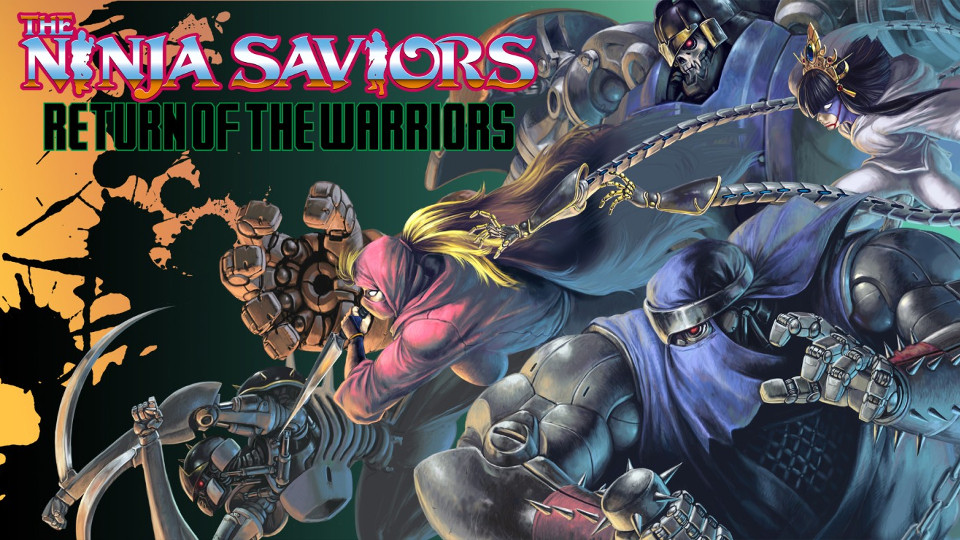 I grew up on RPG’s, side-scrolling beat ‘em ups was a genre that passed me by for a long time. I don’t have the nostalgia for the genre that many gamers do. That doesn’t mean I dislike it though. Mega Man, Streets of Rage, Double Dragon, Final Fight are all great titles. The Ninja Warriors was a series out in the heyday of the genre and while it may have been popular, I haven’t heard of these games. The Ninja Saviors: Return of the Warriors is a reboot of the most popular title in the series, what a great place to jump in!

There is virtually no indication of the plot. Bad guys, big robots, explosions. You get the gist.

Watch the XXL trailer for The Ninja Saviors: Returns of the Warriors:

There are 3 starting characters to choose from when you start the game. Ninja is a huge tank, slowly marching towards enemies and cracking their skulls with his giant nunchaku. It’s odd to play as somebody called Ninja, who is so slow but Kunoichi fills the speedy and acrobatic slot. Finally we have Kamaitachi, who has extremely fast sword strikes. Adding a splash of character to the trio is the fact they are all awesome cyborgs, with Ninja feeling like you are playing as the Terminator. They don’t just look cool, they all have different stats, with Ninja having a higher health pool but being much slower, Kunoichi being fast and doing high damage but not taking as many hits and Kamaitachi hitting quicker than any other character but dying very quickly.

As a side-scroller, you move from left to right taking out enemies as you go. Ninja Saviors opts for the “throw many enemies at once” tactic. The standard peons die very quickly and are dealt with very easily. The combat system gets to spread its wings here and it’s fantastic. Like all the best beat ’em ups, Ninja Saviors does a lot with a few buttons. You can pull off some pretty crazy combos no matter which character you pick, in fact the game requires you to. Each of the 8 levels ends in a tough boss, it’s not Contra level hard by any means but it’s challenging enough. The reason you need to master combos, is because the game doesn’t dole out much extra health. As you maintain your combo meter, you can unleash a devastating super power, the higher your combo, the more often you can use it. Once you beat the game, you unlock one of the bonus characters and unlock the next difficulty and the potential to unlock the final character. Ninja Saviors is built for speed runs, mastering your characters move-set and keeping that combo high. While this all feels fantastic, it comes at a cost. It’s so short, the 8 levels can be over extremely quickly.

View some screenshots from The Ninja Saviors: Return of the Warriors in our gallery:

While I’ve only glanced at the original version, I can only really speak to how this version looks. Happily, it looks great. The big bulky character design screams the 80’s aesthetic and has a slight cyberpunk edge to it. Framerate was rock solid, not a dip in sight and I really liked the chiptune soundtrack. It’s not as iconic as other titles but it got me tapping my toes.

Initially, I had a bit of trouble getting used to the game, since I rarely play this genre. When I got the controls down, it was hard to put down. When you finish a level you always feel like you could finish it quicker, with a pip more health. The moveset is more varied than it appears and pulling off my favourite combos was a joy. While I wish there was more of the game, it’s only £16.99 and that “one more go” addiction definitely justifies the asking price.

The Ninja Saviors: Return Of The Warriors was reviewed using a digital code provided by the publisher.

Advertisement. Scroll to continue reading.
In this article:Nintendo Switch, The Ninja Saviors: Return Of The Warriors