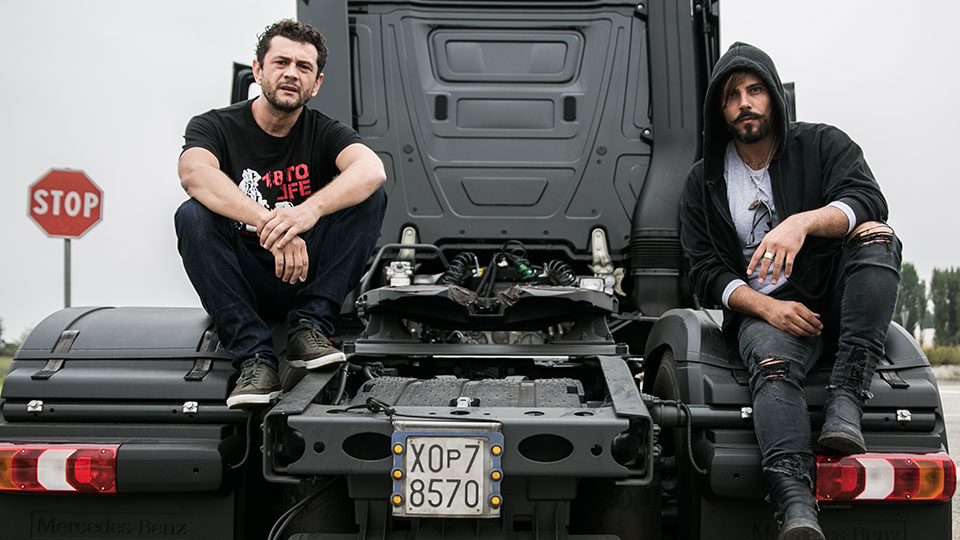 After growing up together in Sicily, long-time friends Antonio (Vinicio Marchioni) and Agostino (Marco D’Amore) went their separate ways and lost touch. Years later Antonio decides to reconnect with Agostino and tracks him down. He doesn’t receive the warmest welcome but refusing to give up, Antonio forces his way back into Agostino’s life and the two men begin to get to know one another again, showing their true colours along the way.

Drive Me Home is a road movie by writer/director Simone Catania and it’s refreshing in that it’s about two men who love one another but not in a sexual way. Antonio is straight and desperate to reconnect with his former best friend when his family home is about to be auctioned off to pay his increasing debts. Agostino is gay, something that Antonio is initially unaware of, and spends his life on the road as a truck driver. The two men are very different from the boys they used to be when they were firm friends, which makes rekindling their relationship a challenge.

Catania and co-writer Fabio Natale reveal their hand slowly, drip-feeding the audience information about the lives of the two central characters. One scene that plays out very well is the moment Antonio discovers that Agostino is gay. The two men go to a bathhouse where Antonio is pleasured by two women while he observes Agostino getting intimate with a man. The two friends don’t really talk about the encounter and there’s a feeling that they understand one another without having to say any words. It’s a powerful moment and it helps to convey the strength of their friendship, and bond, to the viewer.

Much of the film features just Antonio and Agostino as they trade stories about their lives and reveal more about themselves to one another. Antonio has enjoyed a side hustle a con-man, something he is keen to show off for Agostino, while Agostino uses the road as a way to escape from his problems personal pain. The two men are in very different places in their life but their childhood bond brings them back to one another while they try to figure out their relationship moving forward.

Marco D’Amore and Vinicio Marchioni very good as the leads. They have an easy chemistry that makes the friendship of their characters feel realistic. They go through a range of emotions together and you truly feel that you’re watching a deep friendship blossom once again after years of lying dormant. D’Amore brings the conflict and struggle of his character to the surface while Marchioni puts you on edge as you worry his character is going to unravel at any given second.

Drive Me Home is a twist on what you’ll expect and it’s not the usual love story of a closeted man falling for his gay friend. The love here is platonic but that doesn’t make it any less powerful. The film could have been a little tighter in places but it’s mostly an enjoyable and engaging watch. It’s also nice to see something a little different in gay cinema.