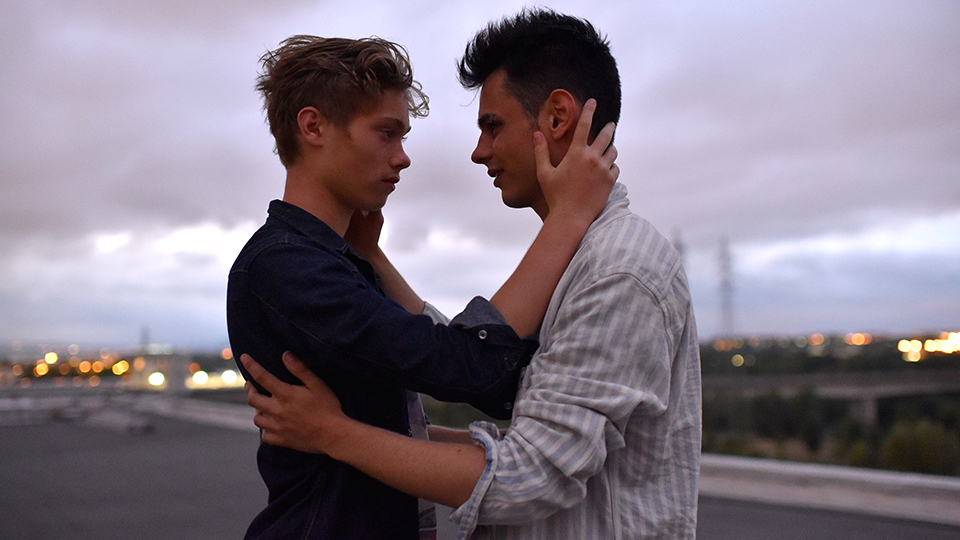 16-year-old Nathan (Bérenger Anceaux) lives with his father Stéphane (Patrick Timsit) and has just started attending a new school. At a party, he kisses classmate Louis (Jules Houplain) unaware that the moment has been caught on camera. The next day the photo starts spreading on Facebook but there’s only Nathan’s face that’s clearly visible in it so he gets targeted by bullies. Determined to protect Louis’ identity, Nathan’s life is turned upside down as he finds himself dealing with the fallout of the photo on his own.

Hidden Kisses is from director Didier Bivel and writer Jérôme Larcher. A coming-of-age drama, the film explores what it’s like for Nathan to be forced to come out to his friends and family once the photo circulates but it goes a lot deeper than that. What writer Larcher has done so well here is create a series of well-rounded characters, who are affected by the kiss between Nathan and Louis. While this is undoubtedly Nathan’s story, there’s a lot more layers to the film making it a welcome breath of fresh air.

Nathan seems undaunted by his sexuality but the sudden reveal to his father Stéphane creates distance between the two, with Stéphane not knowing how to deal with the news as he works as a police officer and tries his best to be a single parent. As Nathan appeals to Louis, who ignores him, we soon learn that Louis’ home-life isn’t a bed of roses and his behaviour is explained by exploring the relationship he has with his aggressive and pushy father. To avoid anyone thinking it’s him in the photo, Louis carries out a very public violent act against Nathan in a bid to hide his own insecurities and struggle to deal with his burgeoning feelings for the same sex.

A nice touch is that we get to see how the teachers in the school react to the bullying and homophobia from the students towards Nathan. One teacher tries to educate his class about choosing their words carefully and thinking before they speak, and he’s hauled into the principal’s office to be warned about promoting homosexuality. Another teacher knows Nathan’s struggle all too well but she’s reluctant to reveal her own sexuality to help him, scarred by her own experiences as a teenager.

Bérenger Anceaux is fantastic as Nathan. He carries much of the film and he portrays Nathan as someone with determination as he faces horrendous abuse at the hands of his classmates. He never gives up hope that Louis will come clean, all the while clinging onto the idea that he’s in love with him. Jules Houplain is very good too and he really gets to flex his acting chops in the film’s second half when the story focuses more on his character Louis. The two actors together are superb and they have an easy chemistry that translates well on screen.

Special mention should also go to Patrick Timsit as Stéphane. He convinces as a single parent going through a rollercoaster of emotions while trying his best to be there for his son. It’s a difficult role to get right but he does so impressively. One particular scene where Stéphane finds Nathan crying and nursing wounds from being beaten up is heart-wrenching and very moving.

Hidden Kisses is the kind of film I wish I’d had available to me when I was younger. It paints a realistic portrayal of what some gay teens go through and the bullying they are subjected to. The film is relatable and I like the fact that it didn’t wrap up everything in a neat bow by the end. Coming to terms with your sexuality is one thing but everyone else dealing with it in their own way, is something else entirely.