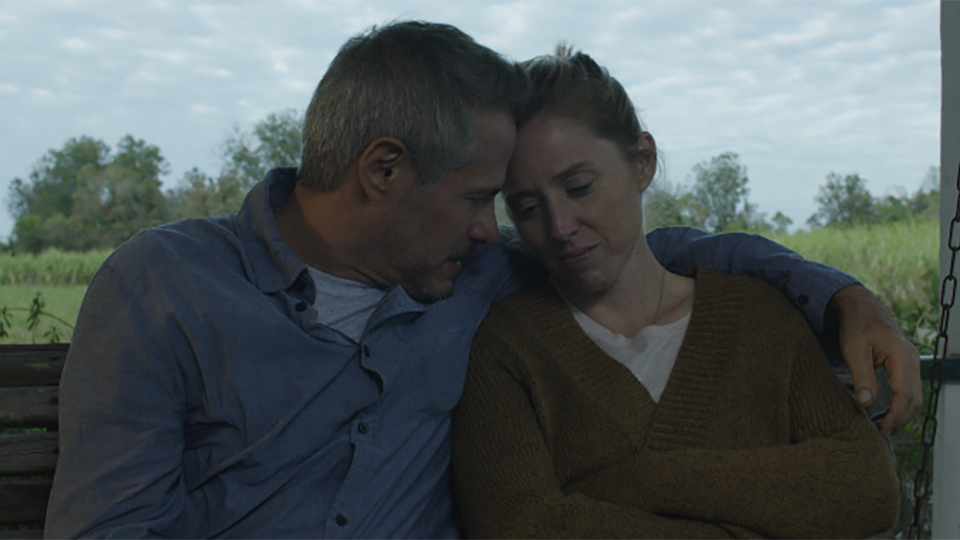 John Demarco (John Schneider) and his wife Marie (Laura Cayouette) are reeling following the murder of their gay son Kevin (Chasen Schneider). The victim of an apparent hate crime, Kevin was murdered by his friend Raymond Brown (Jordan Salloum), who is in prison awaiting his execution. As the day draws closer Raymond’s parents Ginny (Amy Redford) and Tom (Kevin Bernhardt) decide not to witness their son’s execution but John and Marie decide they want to see him pay for what he did to their son.

Hate Crime is from director Steven Esteb and writer Jonah Tapper, and honestly the title is a little bit misleading. The film opens with Raymond punching Kevin and drawing his fist back so that blood can be visibly seen on his clenched fist. The events that transpired between the two aren’t revealed until around the film’s mid-point but you can hazard a guess as to what went down and why long before then.

For the most part the film focuses on the impact the murder has on the two sets of parents of the kids involved. John and Marie struggle through each day, trying to make sense of what happened and why. Kevin was open with them about his sexuality and they were supportive of him so from their perspective his sexuality was a non-issue. Ginny and Tom are much more complicated. The actions of their son Raymond have torn their marriage apart as they try to understand how he could have committed murder.

More time is spent with Ginny and Tom, which is interesting given that they are the parents of the murderer. Ginny is battling her emotions to be strong for her son whereas Tom is closed-down and unemotional. A phone call takes place between the pair with their son, which ends with Ginny berating Tom for not telling Raymond he loved him before he was executed. There’s a lot to unpack with those characters, Tom in particular, who made Raymond fearful of being true to himself.

The performances are fairly solid. John Schneider is always dependable and he convinces as a grieving father, particularly in a scene where he faces his son’s killer in prison. Amy Redford pushes her performance a little too far and verges on the wrong side of hysterical. I completely understand that her character would be spiralling given that her son was about to die, but she’s so over-the-top in parts that it lessened the impact for me.

Hate Crime is a solid film that tackles a topical issue. Whether or not what takes place is actually a hate crime is a bit of a moot point but that doesn’t detract from the film’s message. More an exploration on the way that nurture can affect someone’s actions and outlook on life, Hate Crime shows a different perspective for this kind of issue and it acquits itself pretty well.