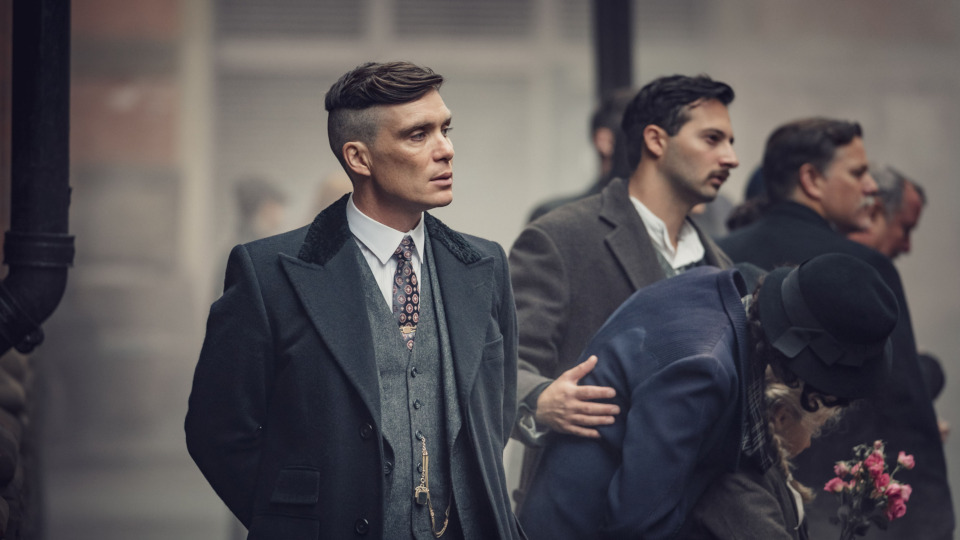 Episode 5 of this series of Peaky Blinders starts with the Shelby’s trying to treat Linda’s (Kate Phillips) gunshot wound,  courtesy of Polly (Helen McCrory). Thankfully she’s only been shot in the arm so she’s likely to make a full recovery and remain a torment to Arthur (Paul Anderson). Arthur is beside himself telling Polly that she should have let Linda shoot him. Arthur’s mental state is clearly in a bad place.

Whilst this is going on Mosley (Sam Claflin) has decided to use Tommy’s (Cillian Murphy) party as a podium to announce the formation of his new fascist political movement. He is a great public speaker and despite the hate behind his speech, it goes down well with the crowd. After his speech, Mosley lays down the law privately with Tommy and makes it clear who is in charge.

We then cut to Linda waking up and Arthur trying to convince her to run away with him to escape the life they currently lead. She’s having none of it and says that shooting him would have been a kindness that he didn’t deserve and by staying alive he can suffer from the things he’s done. This puts Arthur in the foulest of moods for the rest of the episode.

Next, Tommy meets with Younger (Kingsley Ben-Adir) to offer up information on Mosley and his plots. Younger reveals that he is experiencing resistance from his superiors regarding these investigations stating that the defence of Mosley goes rather high up the ranks. Once he leaves the meeting he gets in his car which promptly explodes killing him and also a child that was playing nearby. This event clearly disturbs Tommy and after telling Ada (Sophie Rundle) about Younger’s death (she is, after all, carrying the dead man’s child) he has yet another vision of Grace (Annabelle Wallis). Could this death of an innocent be the catalyst needed to speed up Tommy’s plan to take down Mosley?

Next, we see Arthur leading a group on a canal barge heading to pick up the opium shipment for the deal they have struck with the Chinese. When they arrive something is amiss and they find that the Chinese have been attacked. After coming under fire Arthur has had enough and proceeds to produce the biggest machine gun ever and mows everyone down. You seriously don’t want to mess with Arthur when he’s in a mood like this!

The next scene sees Tommy visiting a mental asylum. He’s there to visit an old army buddy, Barny, and questions him as to why he won’t accept Tommy’s offer of a chance to kill himself. The answer he gets, that things might change, have a profound effect on Tommy and he vows to help him escape. Barny (Cosmo Jarvis) was an army sniper and Tommy wants to help him escape in order to pull the trigger on Mosley.

By the canal, Tommy and Jimmy McCavern (Brian Gleeson) are awaiting the opium shipment. They are discussing who Mosely will use as protection in various parts of the country and Jimmy reveals that Alfie Solomons (Tom Hardy) might be dead. I found this especially distressing as Alfie is pretty much my favourite character from the show. The tension between Arthur and Jimmy as they square up to each other is enough to make the world explode and when it comes it will be the showdown of the century!

At the end of this scene, Tommy reveals to Arthur that he is speeding up his plans to take down Mosley and will be using Barny to assassinate him. After that, the gloves are off and we can expect a total war between the Peaky Blinders and the Billy Boys.

Peaky Blinders series 5 episode 6 will air on BBC 1 on 22nd September at 9pm.