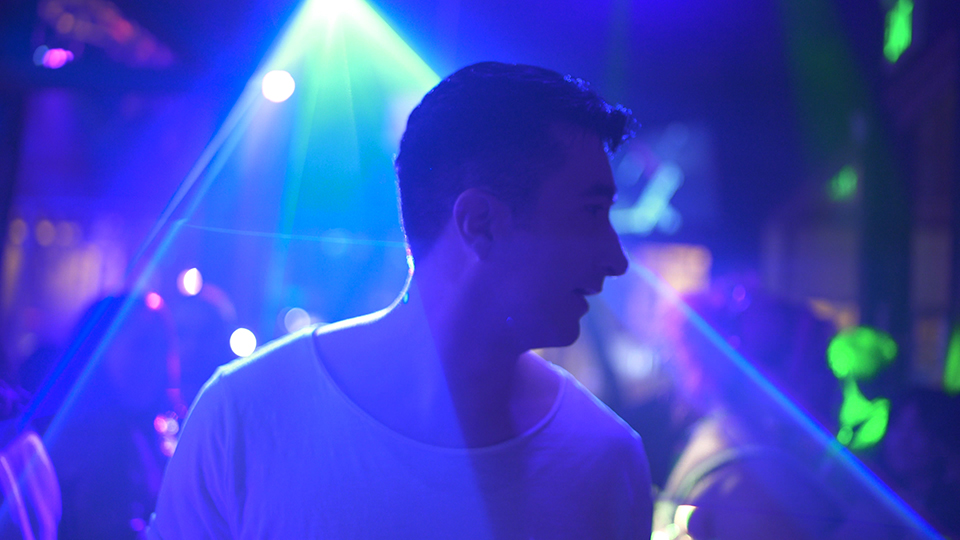 Brazilian Leo (Thales Corrêa) ropes his friend Donnie (Izzy Palazzini) into a night-time quest to crawl the clubs of San Francisco looking for his American Grinder hook-up Totah. In tow they have personal trainer Hunter (Oscar Mansky), a friend of Donnie’s, and the trio takes a trip through the weird and wonderful world of hook-ups and dating for LGBT people. Along the way the trio explores their dynamic and is forced to take a look at what they really want from their lives.

Bathroom Stalls & Parking Lots is the feature film debut from Thales Corrêa, who co-wrote the film with co-star Izzy Palazzini. Drawing inspiration from the hedonistic nature of iconic TV series Queer as Folk, the film promises to take you on a crazy night out with its three central characters. Leo is a hopeless romantic who believes his Grinder hook-up could be the one while Donnie is keen to get high, remain promiscuous and enjoy his life without restrictions.

Thrown into the mix is Hunter, who you first meet while he’s having sex with a woman. It’s quickly established that Hunter may not be as straight as he claims to be when Donnie reveals the two have been sexually intimate. Still he goes along for the ride dishing out his dating advice to Leo as they move from one gay club to the next. Despite being one of the most interesting characters in the film, Hunter vanishes from the last third of the film, which is a real shame.

With Bathroom Stalls & Parking Lots, Corrêa and Palazzini aim to explore and comment upon the often-changing nature of dating on the gay scene. They look at the hook-up and move-on culture that is part of that world, dominated by getting your rocks off with whoever is nearest. For Donnie, that is perfect but for Leo, who wants more and is keen to settle down, he’s unlikely to find what he wants over the course of the evening.

The film also explores the friendship between Leo and Donnie, two Brazilian friends who couldn’t be more different. Donnie frequently goes out of his way to best Leo, belittling him and doing things to piss him off. Their relationship eventually comes to a head but it’s never explored as much as the film needs it to be.

Performance wise the acting across the board is pretty flat. Oscar Mansky is the best of the leads but he’s never really given much to do other than look pretty. He’s capable of tackling more than he’s given here and the lack of real exploration of his character Hunter is disappointing. Corrêa and Palazzini are adequate but both fall down when it comes to the film’s more emotional and vulnerable moments, lacking conviction and struggling to get you on their side.

Bathroom Stalls & Parking Lots sadly never turns into the fun ride it promises to be. While there are some nice moments, it’s a surface-level exploration of the gay dating scene. There’s a real lack of depth to these characters and the whole project is a little rough around the edges. With another film already in the works, Corrêa needs to dig a little deeper and apply a little more polish than he manages here.