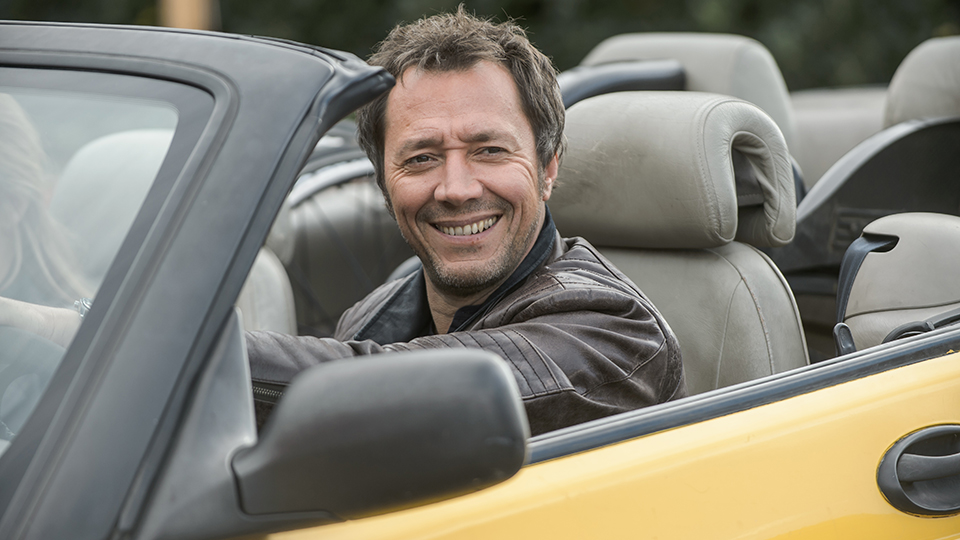 Although new to the UK audience, Detective Cain is on its seventh series in its native France, where’s it’s a hugely popular show (where it goes under the name of Caïn). It stars Bruno Debrandt in the lead role, who many will recognise as Commissioner Brémont from the fabulous (and far darker) series, Spiral.

If you want to avoid spoilers for Detective Cain, stop reading this article now.

Debrandt plays Detective Fred Cain, a wheelchair-bound cop who, to my eyes, bears an uncanny resemblance to the late, great Lewis Collins of Professionals fame. Cain is based in the beautiful surroundings of the south of France – Marseilles, to be precise. He is partnered alongside Lucie (played by Julie Delarme). Their relationship is both professional and (probably) personal. There’s a spark between the two that is akin to Brennan and Booth in US series Bones.

Each episode is a stand-alone story, which means you can jump in and out without having to worry too much about watching each episode in order. The first show in this series revolves around a retired cop, Allard, who has terminal cancer. Dead bodies are turning up in the morgue and the connection between them is that they were all suspects in unsolved cases that Allard had investigated. He’s brought in to help with the cases, but questions are soon raised about his involvement with the killings themselves. Is he there to help the investigation, or is his interest more personal?

This is relatively lightweight show – very American in style – that is lovely to watch, thanks in large part to the lovely Marseilles backdrop that looks remarkably like California at times. The lead actors are attractive and their characters easy to like, if a little shallow. There isn’t a huge amount of in-depth characterization here, to be honest. All we know about Cain himself outside of the motorcycling accident that caused his disability is that he has a son who seems to be punching above his weight with a beautiful and wealthy girlfriend. There is clearly a side story here regarding Cain’s relationship with his son, particularly after he meets the girlfriend at a somewhat frosty lunch.

As you can gather, this is an easy watch. It looks great on screen, it’s well-acted and nicely written. But it’s not Spiral – not by a long chalk! Don’t expect to be challenged by anything profoundly thought-provoking. But that’s fine – it’s fun, witty and an engaging watch and there’s nothing wrong with that!

Walter Presents continue to find enjoyable foreign programming for us to enjoy, and Detective Cain is a worthy addition to the roster.