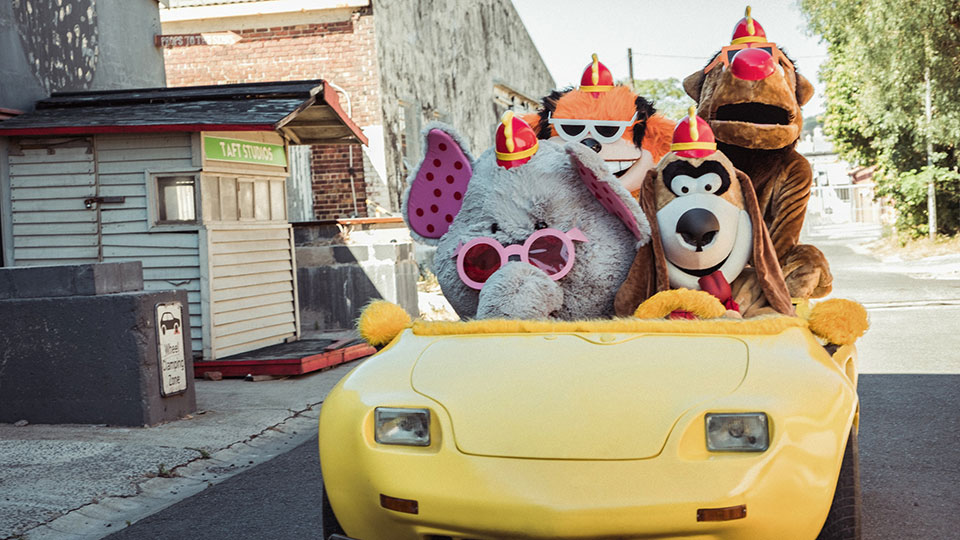 Harley (Finlay Wojtak-Hissong) is mad about The Banana Splits and is ecstatic when his mother Beth (Dani Kind) and his father Mitch (Steve Lund) get him tickets to see a live taping of the show for his birthday. Accompanied by his half-brother Austin (Romeo Carere) and friend Zoe (Maria Mash), as well as his parents, Harley attends the taping unaware that the show has just been cancelled and that the robotic Banana Splits are about to go on a murderous rampage.

The Banana Splits originally ran for two seasons from 1968 to 1970. Aimed at kids and produced by Hanna-Barbera, the show has gone on to find a cult audience in the years since its cancellation. When I first heard that the show was being turned into a horror movie, I was pretty surprised and a little bit dubious as to what it would be like. Would fans of the original series really enjoy seeing their childhood heroes turned into murdering psychopaths?

I was put at ease by the news that Danishka Esterhazy was directing, especially after her excellent film Level 16 which showed at Arrow Video FrightFest Glasgow earlier this year. Frustratingly I wasn’t able to see The Banana Splits Movie at Arrow Video FrightFest last weekend and screeners weren’t available prior to the festival so I picked up a copy on Blu-ray this week after hearing positive rumblings during the festival.

The Banana Splits is pretty bonkers, as you would expect from the premise, but in the most entertaining way possible. There’s something absolutely chilling about seeing this much-loved children’s characters killing people in gruesome and pretty shocking ways. The kills are incredibly inventive and they start once the taping ends and the main characters are taken on a Charlie and the Chocolate Factory style tour of the sets so they can meet their heroes. Inevitably the characters’ curiosities get the better of them and soon they’re all separated and in imminent peril.

Harley and Zoe are paired up to get up to mischief while Beth and Austin get separated from Mitch, who is a complete arsehole, and spend much of the movie trying to find the kids. A pair of social media influencers – played with gusto by Celina Martin and Kiroshan Naidoo – break all the rules to live stream their backstage tour, which results in one of them being murdered in a highly grotesque but thoroughly entertaining way.

Esterhazy gets great performances from her cast, allowing them to embrace the absurdity of the situation they’re in but also bringing some depth to their characters. Dani Kind brilliantly transforms from put-down mum at the hands of her nasty husband Mitch to kick-ass superwoman and it’s a thrilling thing to witness. Finlay Wojtak-Hissong, Romeo Carere and Maria Nash are brilliant as the kids too, giving performances beyond their ages and adding a bit of heart to the proceedings.

The Banana Splits builds to a satisfying climax and it truly does have some of the most creative death scenes I’ve seen in a horror for a while. Once the film ends you’ll have trouble getting the ‘Tra La La’ theme tune out of your head, which is transformed from a joyous childlike song to a chilling foreboding warning of imminent death. The Banana Splits is a whole lot of fun and it breathes a new, and unexpected, life into the classic characters. The end hints that there could be a sequel and I’m definitely here for that!