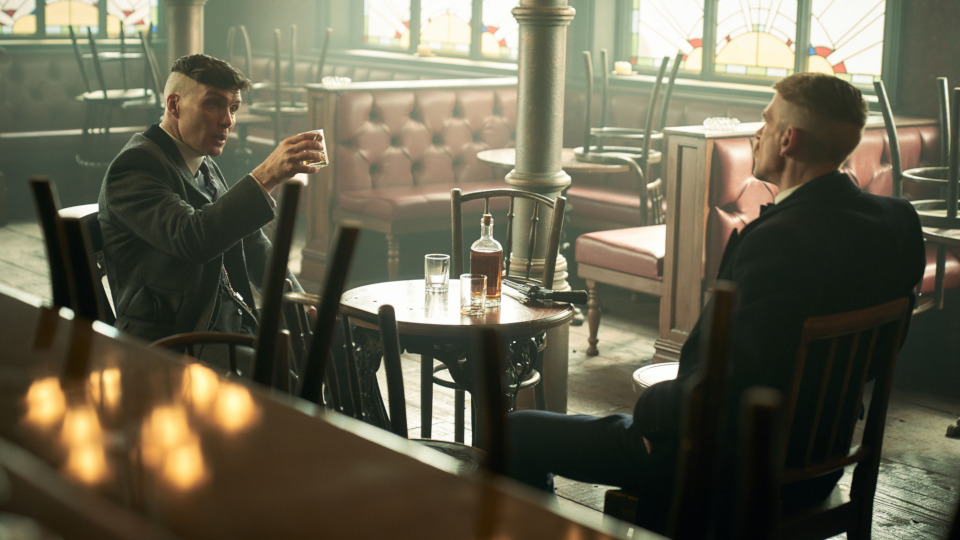 Imagine this. It’s the morning, you look out of the window and see something that catches your attention in the field outside your house. It’s alarming enough that you grab your machine gun on your way outside.

In the field is a scarecrow dressed to look like you with a note in its pocket. Reading the note prompts you to look down and find that the field you’ve just run through has been covered with land mines. Now your kid is running across the field to see you. You race back to him to keep him from being blown up. After the child is safe you take your machine gun and proceed to shoot the crap out of the landmines in an explosive finale. That my friends, is the opening scene of Peaky Blinders series 5 episode 2.

We skip to a scene where Michael (Finn Cole) is being held by IRA members, they are accusing him of betraying Tommy and offer to kill Michael on Tommy’s behalf. Tommy chooses to let him live to find out what’s really going on.

Back at the Garrison pub Tommy and Arthur (Paul Anderson) wake up Finn (Harry Kirton) after a heavy night. They give him a lecture about running around with guns when he should be stepping back from that line of work. Finn clearly still wants to prove himself but the pep talk seems to get through. While Finn is getting changed Tommy questions Arthur if Lizzie (Natasha O’Keeffe) has been asking after him as it turns out she has moved the kids to Arthur’s house.

At the Houses of Parliament, Tommy is visited by a police officer who is looking into the death of the journalist from episode 1. Needless to say, Tommy denies all knowledge and sends him on his way.

The entire Shelby family arrive at the train station to pick up Michael and his new wife (they got married on the ferry over from the USA) Gina (Anya Taylor-Joy). Polly (Helen McCrory) isn’t interested in hearing anything other than if Michael betrayed the family or not. They are eventually intimidated into moving to the Midland hotel.

At the Houses of Parliament, Tommy and Ada (Sophie Rundle) meet with Oswald Mosley (Sam Claflin) who wants to forge an alliance with dealing with the issues in Ireland. Neither Tommy or Ada are interested due to Mosley’s fascist leanings.

The Shelby’s reconvene at the Garrison pub in order to get the truth from Michael. Tommy believes Michael’s story and Gina makes a strong mark and will surely prove to be trouble for the family as the series progresses. In the same scene, we learn that Tommy suspects that there is a traitor within the family.

Out in the woods, we find Aberama Gold (Aidan Gillen) camping when he is ambushed by the Billy Boys, a Glasgow gang looking to move into the Shelby’s territory. To send their message they beat Gold’s son to a pulp and then tie him to a cross before putting a bullet in his head.  Gold suspects that Johnny Dogs (Packy Lee) must have been the one to sell him out as he believes that Johnny was the only person who knew where his camp was. At the end of the episode, Gold turns up at Tommy’s house with Doggs in a bad state accusing him of his betrayal but Tommy refuses to believe that this could be the case.

Finn is finally given some responsibility near the end of the episode when he approaches a former pro footballer for tips on which goalkeepers could be bought in order to fix the outcome of football matches.

How they managed to fit so much into a single episode and deliver enough content on each of the story arcs is beyond me, and I haven’t even mentioned everything that went on in the episode! I was riveted to my seat from start to finish and the episode is a rollercoaster of emotions and I’m not sure how long Tommy can keep it together before he starts gunning down everyone in sight. It is a testament to all involved in the show how gripping it is and how emotionally involved I get as a viewer.

Peaky Blinders continues on BBC One on Sunday 1st September at 9pm.