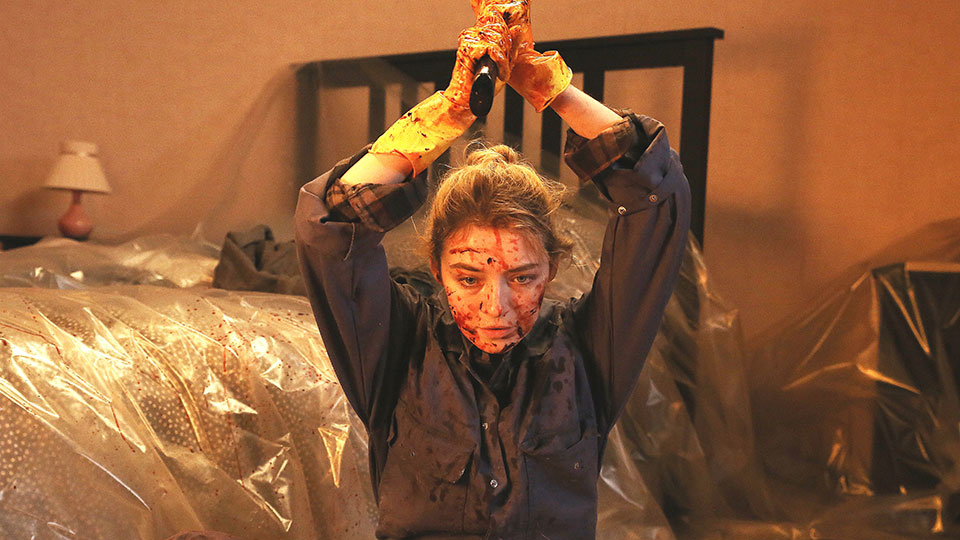 Sarah (Sarah Bolger) is recently widowed following the murder of her husband. Living on the bread line with her two kids, Sarah struggles to make ends meet but refuses to ask her mother for help. One night Tito (Andrew Simpson) forces his way into her home and hides drugs in her bathroom despite Sarah’s attempts to get rid of him. Every night after that Tito returns to pick up some of his stash and to give Sarah her cut of the money he’s making. Desperately scared for the well-being of her children. Sarah tries to keep on Tito’s good side unaware that he has a trio of criminals after him.

A Good Woman is Hard to Find was the closing film at this year’s Arrow Video FrightFest. A thriller rather than a horror, even though it is pretty gory, the film is set in Northern Ireland and pits a seemingly helpless woman against a criminal underworld she wants no part of. The dynamic between Sarah and Tito is an interesting one. Initially she’s terrified of him, worried what he might do to her children but soon the two form an uneasy friendship. Sarah believes she can find out information about her husband’s murder while Tito quickly becomes infatuated with her.

For the first half of the film you wonder how Sarah will get out of her dilemma. She’s in an impossible situation and outwardly she appears to be quite a weak character. Clearly broken by the murder of her husband and struggling with her two kids, one of whom hasn’t spoken since the tragedy, Sarah appears to trudge through life the best she can, passing time rather than living her life. An incident around the mid-point switches things and Sarah becomes empowered and more confident following a split-second decision she makes in the interest of self-preservation.

That moment changes the tone of the film and it goes from Sarah being a victim to a cold-blooded, if not accidental, revenge mission. The minute Sarah feels her family is being directly threatened, she snaps out of her passive state and finds an inner strength to get her out of the situation. I don’t want to say too much more than that but it’s a very interesting transformation to watch.

This is without a doubt Sarah Bolger’s film. Everything rests on her shoulders and she gives her all here. She’s believable as a downtrodden and grieving single mother, and when the film shifts gears, she continues to convince despite the radical change for her character. Andrew Simpson brings a lot of energy to the screen as Tito and his scenes with Bolger are pretty intense. The three villains chasing them are less convincing and there is a bit of dodgy acting that does result in unintentional laughter.

A Good Woman is Hard to Find had a lot of buzz before the screening so my expectations were high. It’s a solid film without a doubt and it’s a showcase for Sarah Bolger’s talents. Personally, it’s not one of my highlights from the past five days but it’s a fairly strong effort from director Abner Pastoll. If nothing else, A Good Woman is Hard to Find was a breath of fresh air even if it wasn’t quite the breakout hit I was expecting.