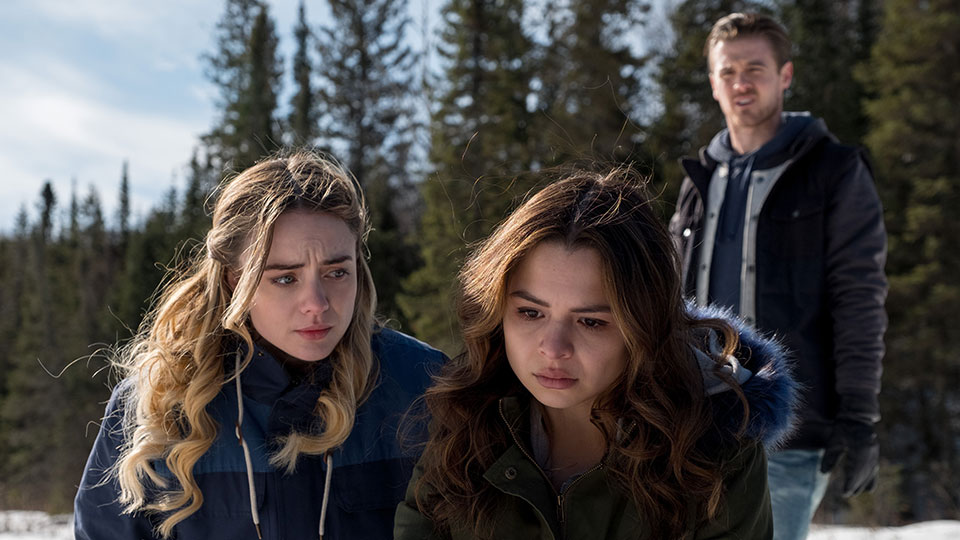 Jill (Hannah Kasulka) takes a break from her studies to go on a snowboarding trip with her boyfriend Derek (Craig Arnold) and a group of their friends. During the drive, one of the group suggests a shortcut and an accident leaves them all stranded in the freezing cold in the middle of nowhere. As deep-rooted tensions between the friends start to rise, one of the group begins acting strangely causing paranoia to set in as they fight to survive the cold night.

Witches in the Woods shows a lot of promise in the opening 30-minutes, feeling like it’s going to be a campy throwback to the slasher films of yesteryear. Sadly that potential is never realised and the film becomes more of a claustrophobic drama with the characters stuck in a car for much of the duration. Perhaps the oddest thing is that aside from a mention of witches as a bit of a throwaway plot device, no witches actually materialise and a set-up involving witch trials is woefully underused.

It’s clear from the offset that many of the characters in the film aren’t going to be used for much. There’s a bit of a mystery to unravel around the character of Alison (Sasha Clements) and Jill is having a secret romance with someone that isn’t her boyfriend, but other than that we don’t learn anything about the group. It’s obvious who will make it and who won’t, and with so many central characters there’s no room for any of them really to make an impact.

The cast do a fine enough job. None of them are really required to flex their acting muscles and a lot of the scenes begin to feel repetitive. Jill’s disillusionment when it comes to what may be happening to one of her friends becomes grating and completely unbelievable. Even when the friend is carrying out very strange behaviour in front of her, she carries on obliviously essentially allowing her friends to die one-by-one.

Witches in the Woods is a pretty average horror film. There are some tense moments but with a plot that barely goes anywhere and a story that never amounts to anything, it’s just a bit of a dull way to spend 90 minutes. It’s a shame because it squanders a talented young cast and the poor characterisation ensures you don’t care about anyone. In fact the characters are all so annoying, you start to count down to the first inevitable death so there’s one less to suffer through. There was a potential here but sadly it’s a complete missed opportunity.