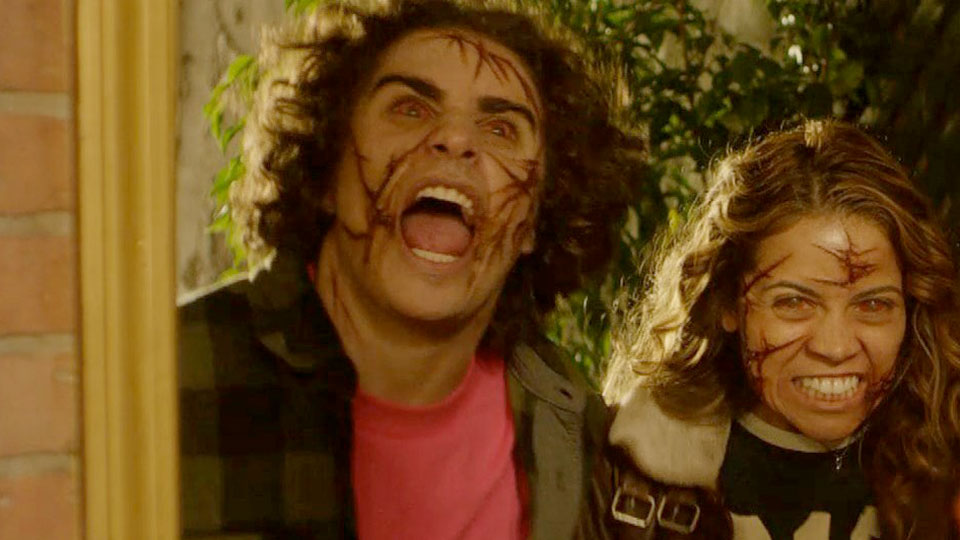 Jake Stephens (Jake Cannavale) has a crush on school-mate Amanda Blake (Angelique Rivera) but he doesn’t think she knows he’s alive. During lunch time in the school canteen, Jake’s eye is caught by Amanda making out with her female friend but he soon realises she’s actually eating her. The shock of discovering Amanda is a zombie subsides when Jake himself transforms into one and the two are forced to go on the run together.

Eat Brains Love is the new film from Rodman Flender and it’s an absolutely hilarious joy ride from start to finish. Taking the zombie genre and doing something refreshingly new with it, Eat Brains Love is essentially a romantic comedy where the two leads just happen to eat people. As Jake and Amanda go on the run, they are pursued by Cass (Sarah Yarkin), her partner Tom (Jim Titus) and their evil boss (Patrick Fabian) from the NCD, a unit the contains zombie outbreaks.

The pace of Eat Brains Love is fast and there isn’t any lagging over the film’s 87-minute run-time. The plot escalates expertly taking Jake and Amanda from one crazy situation to the next, and there’s a nice touch where they learn to target horrible people to eat rather than just feeding on anyone they come across.

Mike Herro and David Strauss’ razor-sharp script packs in a lot of humour and the laughs come thick and fast. Jake is loveable but dumb while Amanda is your typical popular girl but with more of an edge. Together they bounce off one another brilliantly and that’s in large part to the fantastic performances of Jake Cannavale and Angelique Rivera. They lean into the craziness of the film and throw themselves into the performances. Cannavale in particular continues to build on his already impressive CV and he’s very gifted at comedy.

Sarah Yarkin is very funny too as Cass. Although her character is supposed to be eliminating Jake and Amanda locating them with her psychic abilities, she can’t help but be attracted to Jake. Her feelings towards him muddy the waters in terms of her job and she finds herself hampering, rather than helping, the pursuit. Yarkin is very droll in her delivery and she delivers some of the film’s best lines.

Eat Brains Love is the funniest film I’ve seen at Arrow Video FrightFest this year. The talented cast combined with Flender’s expert direction, and the incredible script, makes this an absolute must-see. The ending leaves things wide open for a continuation and I like that not everything is wrapped up in a big bow. What Jake and Amanda are doing is horrible but they are victims of a disease so are they really to blame? That’s a question you’ll be asking yourself long after the film comes to an end.