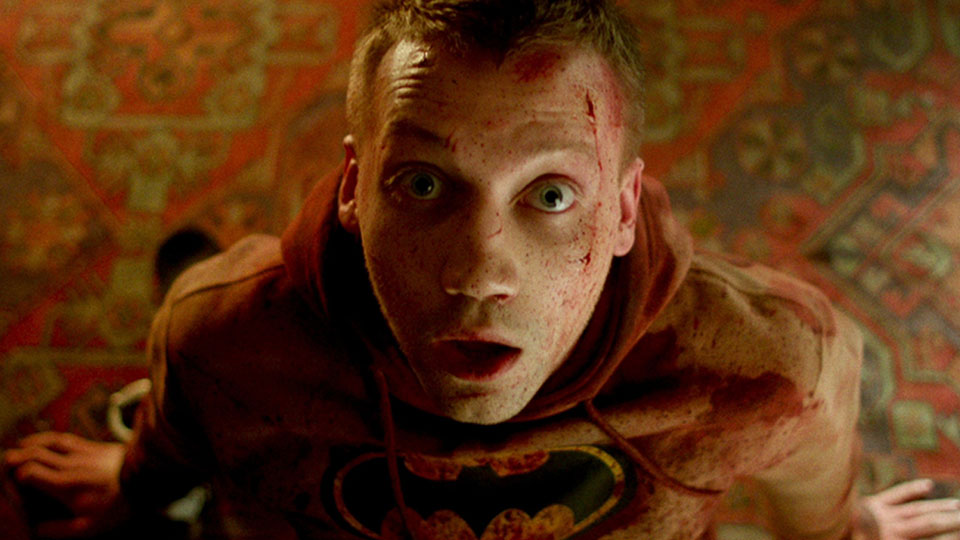 Detective Andrei (Vitaliy Khaev) finds his day disturbed by the arrival of three people – Matvey (Aleksandr Kuznetsov) the boyfriend of his daughter, policeman Yevgenich (Mikhail Gorevoy) and his actress daughter Olya (Evgeniya Kregzhde). Each of them has a reason to want Andrei dead but will any of them manage to get the deed done?

Why Don’t You Just Die! is a violent comedy from Russian film-maker Kirill Sokolov and it’s definitely influenced by the work of Quentin Tarantino. The film is full of humour as each of Andrei’s adversaries shows up at his apartment to get their revenge. The first through the door is Matvey (Aleksandr Kuznetsov) who believes that Andrei raped Olya when she was a teenager. Fuelled by the desire to get revenge on her behalf, and get his hands on Andrei’s fortune, Matvey realises it’s not going to be as straightforward as he’d hoped.

While Andrei isn’t expecting any of his three visitors, he’s more than prepared to fight back and that leads to some very, very funny moments. It also gives way to plenty of stylised violence with director Sokolov delivering some visually stunning camera work. One shot that sticks in the mind is one of the character’s faces smashing into a TV set in slow motion. It’s both disturbing and breath-taking.

Of course nothing is quite what it seems in Why Don’t You Just Die! Andrei is undoubtedly a despicable character but is he as bad as he’s made out to be? Finding that out is part of the fun and all the while he has his poor wife Tasha (Elena Shevchenko) by his side trying to stop him from committing murder. By the time the finale comes, the film is blood-drenched so gore hounds will get plenty of bang for their buck.

The ensemble cast is brilliant. Aleksandr Kuznetsov is a particular standout as Matvey and he’s required to go through the roughest set pieces over the course of the film. Kuznetsov throws himself into the role and he’s without a doubt the breakout star here. Vitaliy Khaev is fantastic too as the menacing but bemused Andrei, at the centre of everyone’s rage and revenge.

Why Don’t You Just Die! is one of Arrow Video FrightFest‘s surprises. It’s more a violent action film than a horror but there’s enough here to satisfy the horror crowd. The cast is excellent, the plot unravels in a compelling way and the fight sequences are stunning. It’s a little different than the rest of this year’s slate but that’s a reason it’ll stand out once the festival comes to a close.