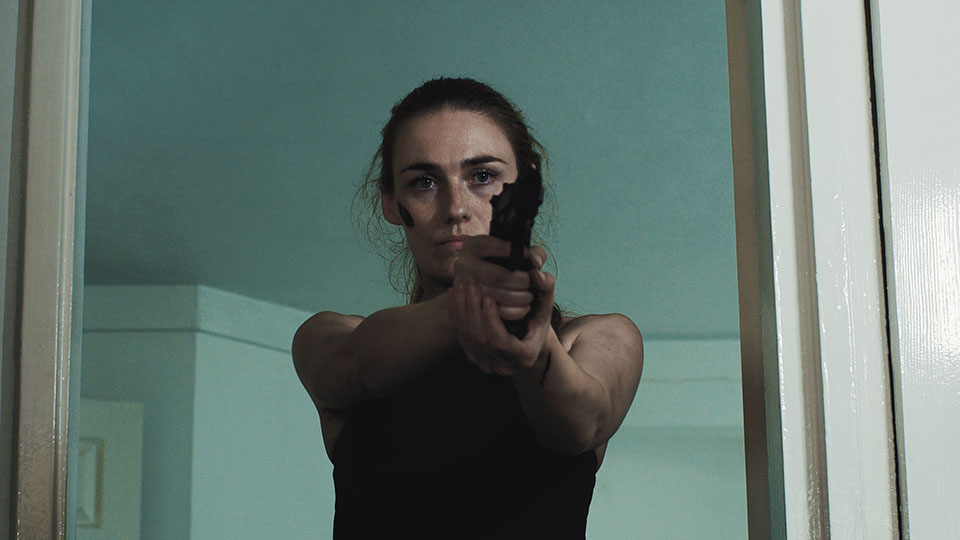 Former Royal Marine Commando Sam (Rebecca Rogers) leaves her baby at home while she dashes to the pharmacy to pick up some medicine for it. On her way she’s kidnapped and when she wakes up she’s trapped in a deserted military factory. Discovering that there’s another woman in the factory that’s also been kidnapped, Sam tries to escape but an invisible foe is intent on keeping her exactly where she is. Locked into a deadly game of cat-and-mouse, Sam has to race against time to escape and reunite with her baby.

Justin Edgar’s film has a gripping premise and Sam’s removal from her baby is one that is pretty unsettling. While the character clearly makes a poor call in judgement, you can forgive her due to the pressure she’s under as a single mum. When she wakes up in the factory, you can’t help but feel dread as time passes while she attempts to escape, made all the more worse as Sam knows her baby is helpless and alone.

Like Sam, you’ll spend a lot of time wondering why she’s in the predicament she’s in and this is where you may find that the film is unsatisfactory. If you’re expecting a big reveal that opens up to a wider story, then you’re going to be sorely disappointed. There’s no particular rhyme or reason as to why Sam is targeted and taken. It would have added more weight and a bit more of a punch had there been a stronger link to her antagoniser. Instead it’s all a little bit arbitrary so the climax is a bit of an anti-climax.

There are some nice touches though. The use of drones to keep Sam in her place is done well and the way in which the captor hides himself is clever, if not beyond the realms of possibility (but hey this is a horror film after all). Sam’s background and career come into play to help her survive but there’s a complete lack of empathy for the other women that she encounters who are in the same situation.

Rebecca Rogers makes for a strong lead and she convinces as a woman focussed on finding her way out of her situation. She doesn’t give in to her emotions, instead thinking her situation through logically and looking for vulnerabilities that will allow her to break free. I liked that she didn’t at any point give in to hysteria or burst into tears. She’s steely and a bit of a bad ass.

Stalked is a decent watch and there are some really tense moments. I did find the lack of a link to the villain of the piece a bit disappointing and the end comes about pretty quickly, and easily. That having being said, the film did thoroughly entertain me and I thought Rogers was a fantastic lead actress. It may not be perfect but it does enough to keep you hooked throughout its 82 minutes.