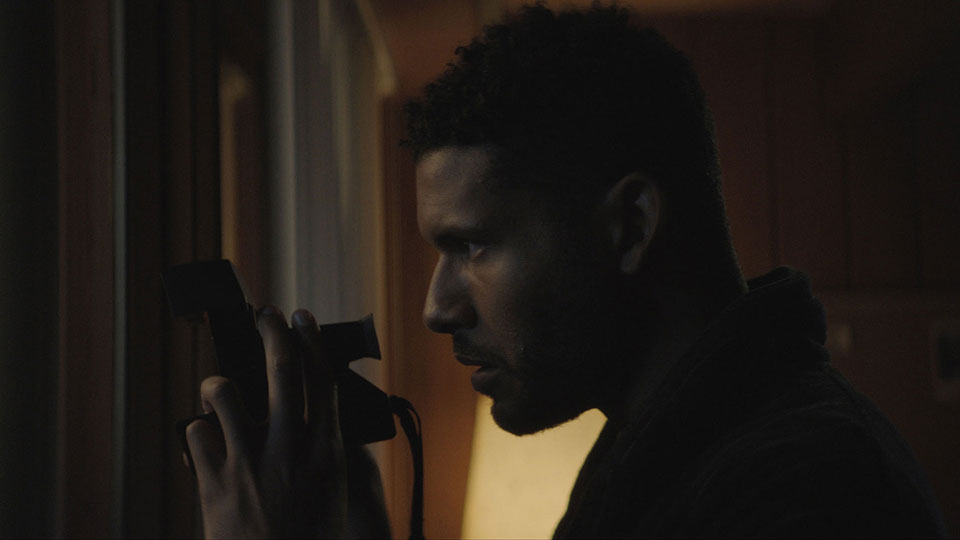 Malik (Jeffrey Bowyer-Chapman) moves to a small town with his partner Aaron (Ty Wood) and Aaron’s daughter Kayla (Jennifer Laporte). Unnerved by the locals strange behaviour towards the family, Malik starts to suspect the neighbours are up to something. Working from home, he notices a series of strange occurrences and spies the neighbours partaking in a what appears to be some kind of strange ritual. As Malik plunges into paranoia, it causes a rift with Aaron and Malik struggles to tell fact from fiction.

Spiral is the latest film from Kurtis David Harder and it’s so fresh from the editing suite (literally completed a week ago) that Arrow Video FrightFest attendees were the first people in the world to see it. A slow-burn, Spiral chips away at your nerves as the intensity increases, putting you in the shoes of Malik as he tries to work out what on earth is going on. Aaron is completely oblivious, as is Kayla who is spending time with local boy Tyler (Ty Wood), despite having a boyfriend in her previous hometown.

Set in the mid-90s, Harder allows the film to be free of technology, for the most part, giving the film a nice old-school vibe. It also means the characters can’t hop onto their phones or much more than basic Internet to help solve the film’s many puzzles. That’s a good thing as it makes the reveal much slower and allows the tension to build in a really effective way. There are shades of Get Out and Hereditary here too, exploring what its like for outsiders to be treated poorly in small town America.

I liked the choice to have a gay couple as the main characters and I loved that they didn’t fall into stereotypes. Malik and Aaron are well-rounded and full-fleshed out characters and Harder uses the current fear of ‘others’ that’s rife in America to bring his point home. It’s timely, compelling and pretty fascinating. There are some brilliant scenes where Malik and Aaron meet their neighbours for the first time and are told that the town has no one like them. That immediately sets off the alarm in your head and you know that it’s going to get a lot darker and quickly.

Jeffrey Bowyer-Chapman gives a breakout performance here as Malik. Having liked his work in UnREAL and American Horror Story, it’s nice to see him take a lead role. He more than proves he can carry a film and his performance here is layered and nuanced. Malik has a tragic backstory that plays out over the course of the film and that gives even more material for Bowyer-Chapman to work with. He is particularly strong when Malik spirals (no pun intended) into near madness, and he always remains sympathetic to the audience. He could well go on to do big things in the future following this. Ari Cohen gives a more straightforward performance that’s in line with his character Aaron, who is the more rational of the two characters.

Spiral is a solid film that packs in plenty of creepiness and mystery. I was worried for a while that the climax wouldn’t hang well with the rest of the film but Harder pulled it off admirably. Yes there are echoes of other films but this is the first time I’ve seen a horror film with such a realistically depicted gay couple at the centre. This is something I’d like to see more of and the film drives home the point that although we’ve moved on in terms of society’s attitude towards people who are ‘different’, we still have a hell of a long way to go.