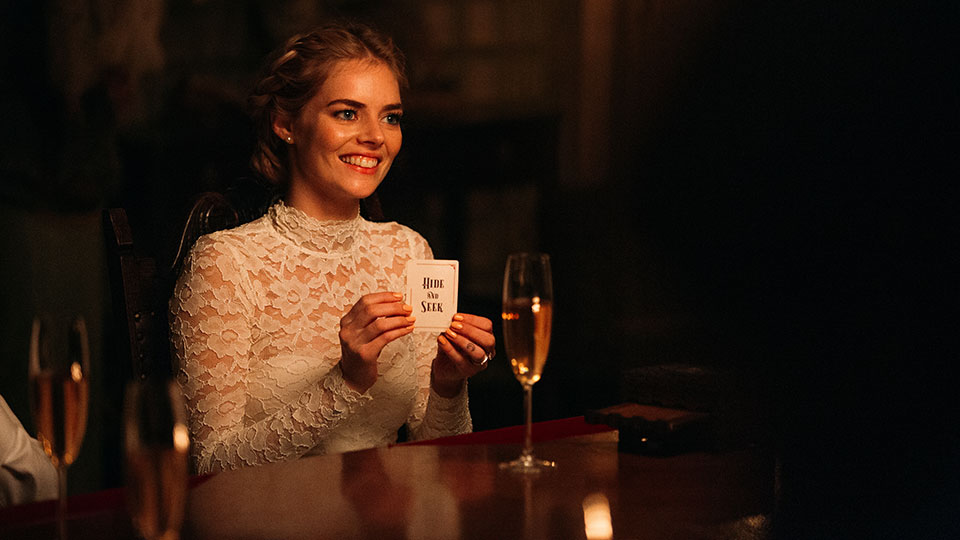 Grace (Samara Weaving) is looking forward to starting a new life with her husband-to-be Alex (Mark O’Brien) who is part of the wealthy Le Domas family. Unsure whether or not his family like her, she marries him at their grand house and is told that evening that she has to draw a card and play the game it picks. The card she pulls says Hide and Seek, which Grace believes is a harmless bit of fun if not a bit strange. What she doesn’t know is that’s the one card that means she’ll be fighting for her life as the family hunt her down to sacrifice her and save themselves.

Ready Or Not is a film I had absolutely no expectations about going into it. Over the last few days I’d heard rumblings that it was good and even Stephen King has been tweeting his approval. As the film opened it was quickly established that it was going to pack a lot of humour alongside its inevitable descent into violence. Part of the horror in the first half an hour is that Grace has no idea what’s about to happen to her and as she climbs into a dumb waiter to hide, her in-laws are giving the family weapons to hunt her down with. When she realises what’s going on, it’s both shocking and exhilarating.

The film gives commentary on the divide between the rich and the rest of us. Grace is from a foster family background while the family she’s marrying into seemingly have everything. She’s worried they’re all looking down their nose at her and judging her, and for the most part they are. A couple of the family members genuinely like her and that makes things interesting when they are forced to hunt her down. There are also some great accidental deaths throughout the film that turn into a bit of a recurring joke and are brilliant.

The characters are what makes this film so good. Samara Weaving is always worth watching and she brings grit, humour and strength to Grace. She’s put through the mill in this film and she’s brilliant. Henry Czerny and Andie MacDowell are brilliant as Alex’s mysterious parents while Nicky Guadagni, Kristian Brown and Melanie Scrofano are scene stealers as miserable Aunt Helene, useless Fitch and ditzy coked up Emilie respectively. It’s good to see Adam Brody in a meatier role too as Alex’s brother Daniel, and he is very funny and sympathetic throughout.

Ready Or Not is an absolute blast. It’s pure adrenaline from start-to-finish and the very, very funny. The film received one of the best reactions I’ve heard at the festival so far and a rapturous round of applause at the end. With a climax that’s both satisfying and incredibly unexpected, it’s the kind of film that will go down in FrightFest legend and I already can’t wait to see it again.