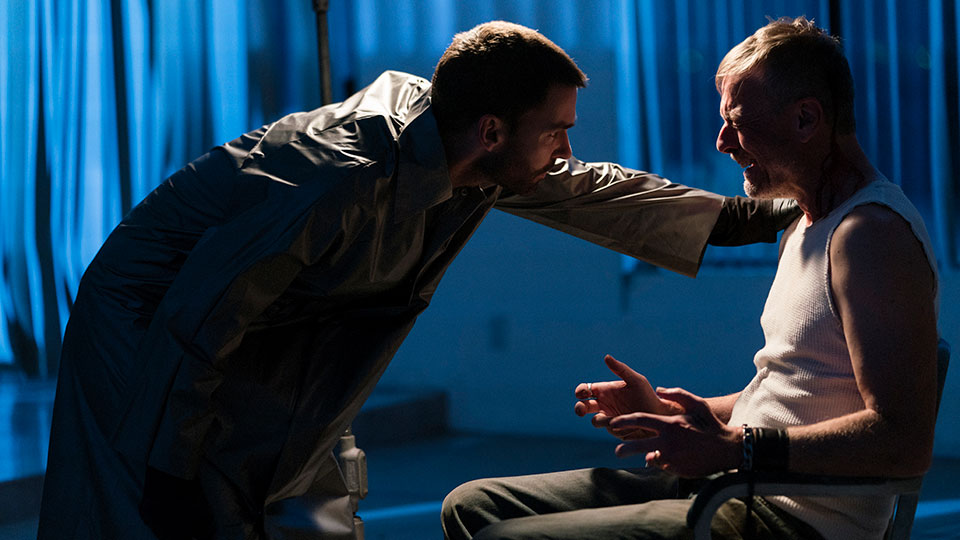 Counsellor Evan (Seann William Scott) spends his days talking to at risk kids who are victims of violence within their own families. Incensed by what he hears, which resonates with him due to his own troubled upbringing, Evan seeks out the people causing his students pain and dispenses his own vigilante version of justice. As the bodies pile up, Evan unwittingly catches the attention of police detective Overstreet (Kevin Carroll) who believes he may have something to do with the murders.

Bloodline is essentially Dexter but played straight. Whereas the much-loved TV show mixed humour in with its darker tone, Bloodline leaves the humour to one side and that’s where some of the film’s problems begin. Evan is a character that is so poorly fleshed-out that you can’t really get on board with his actions. There’s an attempt to justify his murderous traits by pointing the finger at an abusive childhood and Evan’s mother Marie (Dale Dickey) appears to not be particularly sweetness and light either.

There are many things that jarred with me over the course of Bloodline. Aside from the fact that Dexter already did this kind of storyline in a better way, the opening sequence felt unnecessarily gratuitous as nurse Carrie (Christie Herring) strips off and showers before being murdered. That scene is replayed again later in the film to reveal a curveball but I didn’t really understand why the camera lingered over the completely naked actress in such a voyeuristic way.

I can see why Seann William Scott would be attracted to this role. Known for his goofy comedic skills from his American Pie days, it makes sense that he’d want to branch out and stretch his acting muscles. It’s hard to tell whether it’s the writing for the character, the direction or Scott’s performance but something just doesn’t work. His version of menace is nothing new and I struggled to believe him as a cold-blooded killer.

Bloodline does try to do some things differently. I appreciated that there was a pattern to Evan’s kills rather than a series of random murders. The relationship with his mother, while played overly ominously, is an interesting hook to keep you invested in the film. A second twist that takes place during the climax takes things too far beyond believability for it to ring true, which is a real shame. I also felt that Mariela Garriga’s performance as Lauren wasn’t strong enough to truly win the audience over either.

I had high hopes for Bloodline but sadly it’s just not a great movie. It’s derivative of better material and two of the three leads were miscast. While it has plenty of nasty and gruesome scenes, that’s not enough to make this a truly decent film. I’m a fan of Sean William Scott but this just sadly wasn’t the right move for him. To draw the Dexter comparison out further cast your mind back to the final season and how disappointed you were with it. Bloodline doesn’t manage to reach those heights.