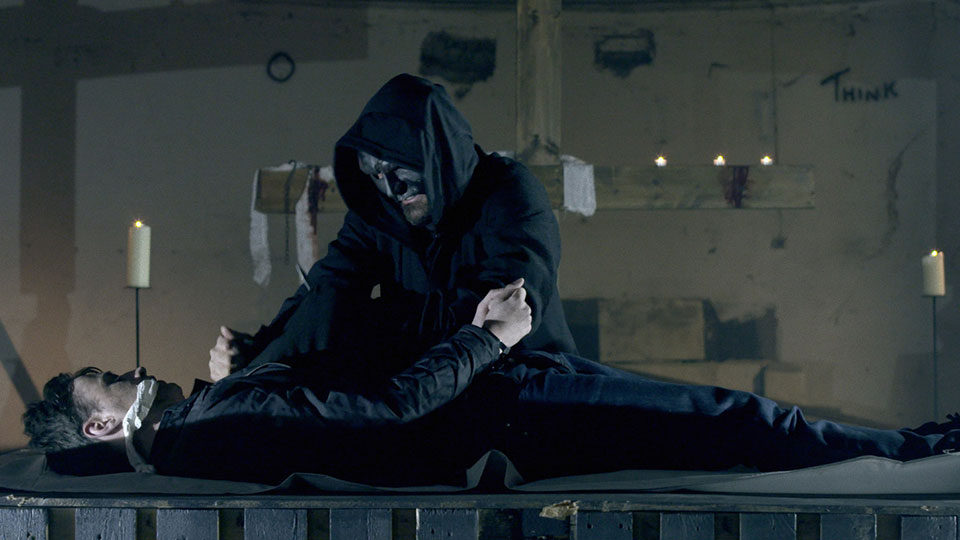 14 years after witnessing a serial killer murdering a priest, Simon (Shane O’Meara) is plagued by a psychic connection that had long lay dormant. With the knowledge that the serial killer is back and has plans to murder him, Simon hires former SAS Steve Brennus (Jim Sturgeon) as his bodyguard. As they try to stop the murders, Simon and Steve are thrown a curveball when a government agency interferes, believing that Simon is too dangerous to roam free.

Part of this year’s First Blood strand at Arrow Video FrightFest, Dark Sense is the feature film directorial debut of filmmaker Magnus Wake. An ambitious film based on the best-selling book First and Only by Peter Flannery, Dark Sense combines drama with elements of science-fiction, horror and thriller for an intriguing and enjoyable watch. The film opens with Simon as a child and it’s quickly established that he has visions connected to the serial killer.

After almost losing his own life by trying to save the priest from his vision, Simon channels his energy into looking after his terminally ill mother and retreats from the world. When his visions return, Simon has no choice but to act on what he sees, especially when he realises that his own life is under threat. The character is played well by Shane O’Meara, best-known for his work in Waterloo Road, and he brings a nuanced and layered performance to the table. Simon is a complicated character and O’Meara gets under his skin and makes sure that the audience roots for him.

While Dark Sense is a well put-together film, that’s directed with an impressive creative flair by Magnus Wake, it does suffer from being a little overly long. There are lots of ideas and plots going on, which explains why it runs for just over 90 minutes, but sometimes I felt it lacked a little focus on its main plot. It’s hinted throughout that Simon may have other powers besides his visions but this isn’t realised as fully as it can be until the very end of the film.

Jim Sturgeon, who gets almost as much screen time as O’Meara, brings a charm and charisma to the film as the down-on-his-luck Steve. Dealing with an incident in his family life, Steve reluctantly agrees to be hired by Simon but soon finds himself being overly protective and almost father-like. Sturgeon brings some gravitas to the role and his performance is strong.

Magus Wake acquits himself well with Dark Sense. For a first feature, it’s incredibly ambitious and he brings the material to life in a very creative and engaging way. As with all first films, it could be tighter here and there, but overall it’s a very entertaining way to spend 93 minutes of your time. Whether or not there’s enough horror in it for the Arrow Video FrightFest audience is a moot point but there’s no getting away from the fact that Wake will acquire plenty of fans keen and eager to support his future projects.