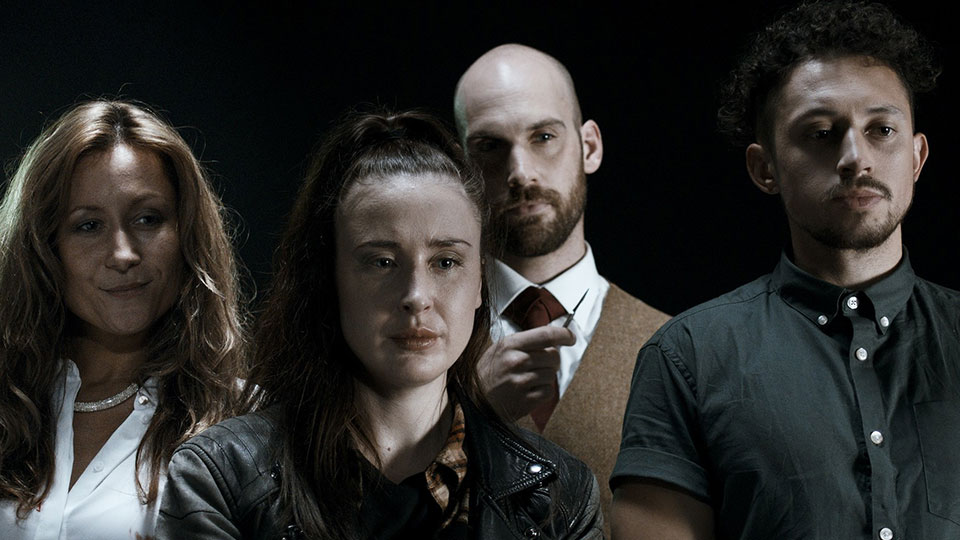 Ex-lawyer William (Rich Keeble) and his team run an underworld operation where they find desperate people to take the fall for crimes they haven’t committed in exchange for a hefty payout. The process, known as the Criminal Audition, takes place in an undisclosed location and the latest batch of hopefuls – Lydia (Rebecca Calienda), J (Blain Neale) and Preston (Ben Scheck) – battle it out to be picked as the perfect candidate. When William’s client for the job turns up, things take an intense turn and the night descends into chaos.

Criminal Audition is the first film from director Samuel Gridley who co-wrote the screenplay with Luke Kaile, who stars as Ryan in it. Originally starting life as a one-act play back in 2009 and inspired by stories of doppelgangers going to prison in place of real criminals, Criminal Audition was an idea of Kaile’s that was developed with the help of Gridley into a feature film. The concept is an interesting one and it highlights the lengths that people will go to when they’re desperate for money.

Lydia, J and Preston’s night starts off promisingly enough as they are told they’ll have to complete a series of tasks in order to be selected from the job. What they don’t realise is that if they’re not selected, they might not get out of the situation alive. Ms M (Noeleen Comiskey) and her associate Morris (Cameron Harris) arrive to watch over the audition to ensure that they’re getting what they pay for. Increasingly though Ms M starts to interfere with the evening’s events and it becomes clear very quickly that she is willing to test the candidates much further than anyone expected.

You can tell that Criminal Audition originally started out as a play and that’s no bad thing. Set mostly in one location, the film has the claustrophobic feel that intense theatre can have and the slow build makes it increasingly more unsettling as the film goes on. Aside from a little dodgy acting here and there, the cast does a solid job here with Kaile and Calienda in particular standing out. Their characters are also some of the best developed here so they get more of a chance to stretch their acting chops and impress.

The final act of the film reveals itself well and it throws some surprises in the mix. The story could perhaps have done a little more to conceal the eventual outcome though as even if you don’t work everything out, there’s only a limited number of conclusions the film can have given the number of characters on screen. It’s a minor quibble and something that both Gridley and Kaile will improve with as they get more films under their belt.

Criminal Audition really did surprise me. I have to admit it wasn’t a film that I’ve earmarked as being particularly keen to see but it won me over. I admire what the film-makers have achieved her, especially given it’s their first film, and there is plenty of potential for both Gridley and Kaile in their future endeavours. While not a perfect film, Criminal Audition is a strong statement of intent from two exciting new faces on the horror circuit.